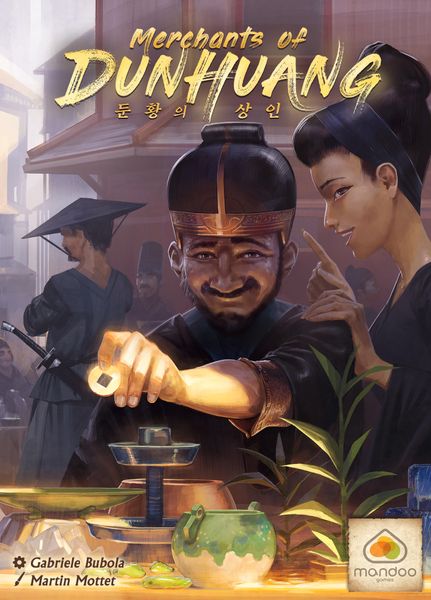 In Merchants of Dunhuang, players take on the role of competing brothers who end up trying to find the true value of a pound of flesh, with or without the blood inside it.  No, wait, that’s the wrong story.  As this game’s story goes: “In Merchant of Dunhuang, we are powerful merchants in Dunhuang who want to have the strongest power. To do that, we should control the supply of valuable goods, which means we need to use various people in the market to collect information and to use their skills. Be the lord of Dunhuang market with the help of little birds!”  If you search for this game on BGG, it is currently listed as “Merchant of Dunhuang”, but the rules translation that I have from the publisher has “Merchants of Dunhuang” in the art…

I had never heard of the game before talking to the nice folks at Mandoo, and then when I did some research, I realized that the designer of this game is also the designer of Hats and Skyliners.  Due to this great track record, my interest in the game immediately increased.  Like many games from Asia, it comes in a small package – but don’t let the size of the box mislead you to the “size” of the game on the inside.

Anyways, to begin play, set up the eight double-sided character tiles on the table, all of which have different skills.  As the character tiles are double-sided with different characters on each side, so 16 characters in total, and this means there are over 350,000 different possible combinations in the setup. [edit – from one of our loyal readers – If each tile can be placed one of two ways, and there are eight tiles, then there are 2^8 = 256 possible combinations in the setup. If you are accounting for the order of their arrangement in a ring, there are 7! possible arrangements of eight different characters in a ring, so that makes 256 x 5040 = 1,290,240 possible arrangements.]

There is a deck of 55 Goods cards which have a value from 1 to 10, with only one card with value 1 and ten cards with value 10.  (Similar to Pairs and many other like games)

Move the “camel” on the current character tile to the next tile. If you want to move more, pay coins to move further, one coin per additional space around the ring. 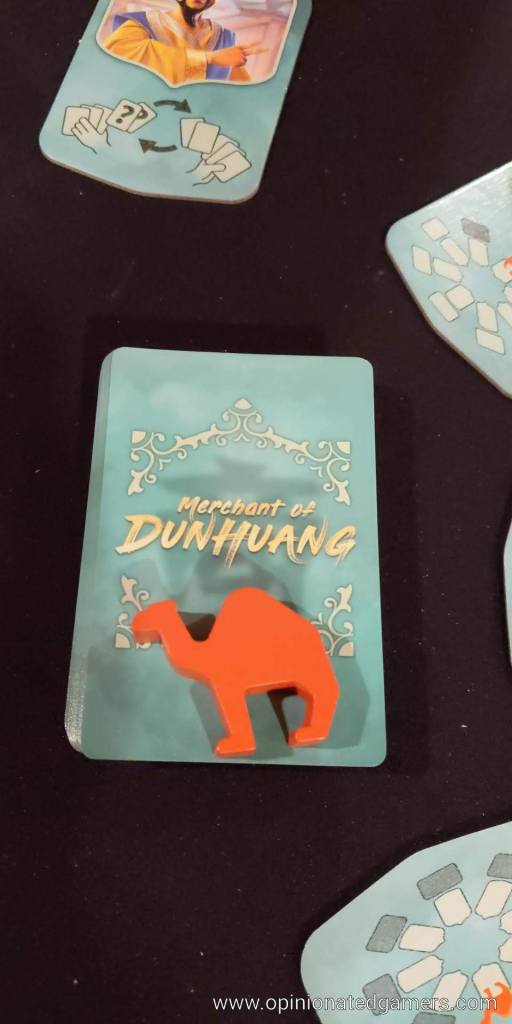 Pick up the goods card on the tile to add it to your shop (in front of you) or your warehouse (your hand).

Use the character skill on the tile or collect three coins.

Depending on the number of goods in your shop, you can take the corresponding majority token. If you have at least a tie for the most of that number after putting the new card into your market.

Examples of some of the character skills are:

The game ends either:

(1) When no more cards are in the deck, at which point a majority token is worth 2 victory point, and the player with the majority (or tied for majority) of each good in their hands scores points equal to the goods’ value on the card, and each prestige token left over scores 1 point… or

(2) When any player has four different goods in hand and has collected four majority tokens, at which point they win the game immediately.

Merchants on Dunhuang packs a lot of action into its small box.  As you have read above, the basic rules are quite simple – it only takes a minute to set up the game and explain how it works.  The dual ending conditions are a little complex, and that should take a little more time to be explained, but realistically, your group should be up and running with the game in about 5 minutes.

The character skills on each side of a card tend to be related, so while you’ll get either the A or B side of the card, you will usually have a good distribution of possible effects in each game.  The actual distribution will change from game to game, and surprisingly enough, the relative proximity of certain effects can make a difference on how likely you are to make a synergistic  combo from them.  Making careful note of the actions available in each game is a very important contribution to your overall success.

I have yet to see a game end on the immediate victory condition, though I think that it has been surprisingly close (once a player had 4 majority tokens, but he must not have had four different goods in his hand as he did not claim the win).  The presence of this immediate win does add a little to the tension, making sure that you are keeping a close eye on what other players are doing and not simply working on your own end-game strategy.  There is an interesting interplay in getting and keeping the majority markers, and depending on the characters in the game, there are both offensive and defensive maneuvers that can be undertaken in regards to them.

None of the character effects allow players to alter other player’s shops – so this makes taking control of the lower numbered goods more permanent.  There is definitely strong competition for the 2,3, and 4s as those can lead to easily locked up majority markers. As far as I can remember, only one character (both sides) puts your hand cards at jeopardy, but since they are on the same character card, this means that there will always be one of the two possible riffs on this action in play in every game.

The card art is clean, thematic and well done. The goods are all easily recognizable with distinct images as well as different colored backgrounds.  The characters all have emotive art that brings life to their characters.  The iconography on the characters is also well done; generally – I still need to rules to make sure I explain all of the character effects correctly, but once we’re in the game, the icons on the card itself are good enough that we rarely have questions about what the particular actions do again.

Overall, there is a lot of game in this little box, and it plays in a relatively short amount of time. My three player games take about 20-30 minutes now, and I have very much enjoyed my games of this so far.  While the meatiness to volume ratio is not quite as good as say… Sail to India – it’s pretty close.  I will happily pack this in my gamebag as a nice superfiller which won’t take up too much space nor stay too long on the table.  That’s a combination of characteristics that I love in a game.