One of the things that I’m most grateful about concerning this blog is the chance to get to try some of the newest games first.  I was pretty excited to get an invite from Filip at Board&Dice to try out one of their planned 2021 releases, Mandala Stones.

Filip has been my press contact for a few years, and as it turns out, he is also the designer of this new abstract game!

We met online via Tabletopia/Skype, and had a nice chat about the current state of the industry, the plans of Board&Dice for 2020-2021, and of course, a chance to demo the new game with the designer himself!

In this game, there is a board with 24 tower spots, arranged in a diamond pattern.  In the center of these diamonds are spaces for the four black-colored artist towers to stand.  There are two artists each of two different types.    A second board is used to keep track of the scored pieces.  Finally, each player has their own personal board where they store their collected stones and track their own score.  The bottom of the personal board serves as the player aid.

Finally, there is a deck of goal cards, and at the start of the games, players are dealt two bonus cards – one of which will score at the end of the game.

I believe that the game is finished already – but in case it still might change, let me simply use their graphics to explain the game.  The rules are really so simple and elegant that just a few graphics are enough to explain the whole thing!

On your turn, you must perform one of two possible actions: PICK or SCORE.
PICK
Choose one Artist and move it to a different position on the board. Then, take all adjacent Stones that match the pattern of the Artist you selected and are not adjacent to any other Artists.
Collected Stones are gathered in towers on your player board, waiting to be scored on a future turn. 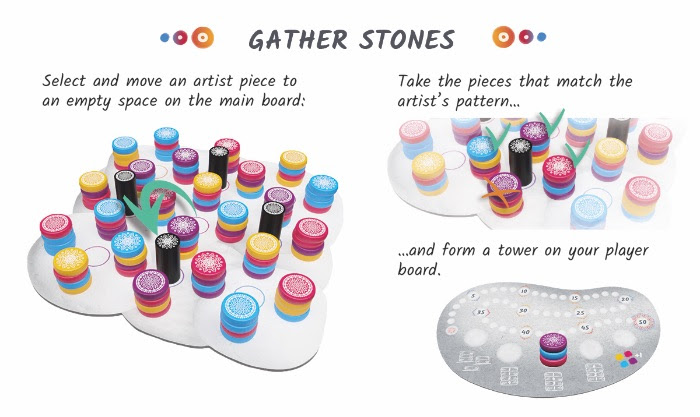 SCORE
Decide whether to score a color or to score any top Stones.
When scoring a color, you must choose a colored shared by the top Stones of at least 2 towers on your player board. Their patterns do not matter, as long as the Stones themselves are of the same color. Score each such tower individually, according to the rule depicted next to it on your player board.
When using the option to score any top Stones, select any number of Stones from the tops of your towers and score 1 Victory Point for each selected Stone. The individual colors and patterns of these Stones do not matter.
All scored Stones, regardless of the option chosen, are placed on a central Mandala board, where you may score additional Victory Points by covering spaces with special markings. 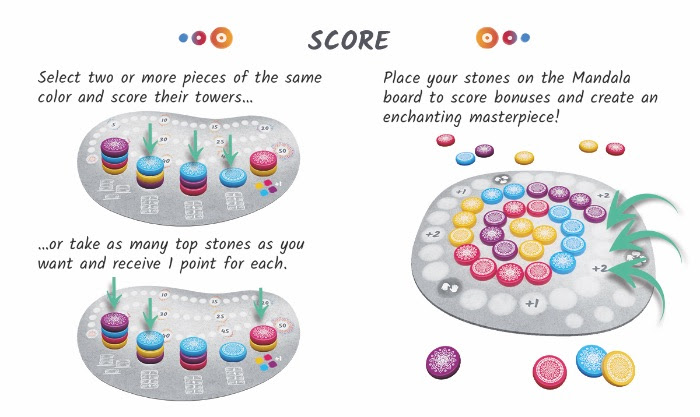 END OF THE GAME
If a Stone is placed on the Mandala board covering a space showing a number of hands equal to the number of players — finish the round, thus giving all players an equal number of turns. Finally, each player has the opportunity to score one of the two Bonus cards that were dealt to them during setup.
The player with the most Victory Points is the winner!

As I mentioned, we met on Tabletopia to play – and all things considered, it works out really well there.  I mean, I still have my reservations about Tabletopia.  I have yet to really find a case where the “realistic physics” made a positive difference.  It would have been much easier for me to have the pieces automatically stack together on top of themselves…. But in the Pandemic gaming world of 2020, Tabletopia is one of the biggest players and one of the main ways to play new games, so I’m learning to deal with it.

The game played really well at 2p, and thus far, that is my favorite player count.  There is no issue with player binding, and I feel it is better for me to develop a strategy when I get to make every other play.

There is a lot of interesting strategy in the game.  As you collect stones, you are sometimes torn between going to a space to collect more stones versus other spaces where you will get the specific color combinations that you want.

As you place the stacks of collected stones on your board, you need to try to set up synergistic scoring plays. Sure, on the first level, getting the same color on top is a good plan, as the majority of the scoring happens with stacks that have the same color on top.  You must carefully choose the arrangement of stones in each stack as you place them – as you will also want to try to set up future scorings as well.  Sure, you can always spend a turn scoring the tops of some of your stacks to set things up, but this is a less efficient way to generate points, and it still costs you a turn to do this.

There is also a lot of clever blocking moves that can be done with the artists.  If you know what your opponent is trying to collect, you can sometimes thwart their collection attempts by moving an artist on your turn to a space adjacent to the target stone, thus making it much harder for that stone to be collected.  In all of my games thus far, there has also been at least one point where one of the artists was locked in place for a good portion of the game because it occupied a space which would have yielded in a great 4 stone pickup, and as a result, neither of us wanted to move it from that space as it would open it up for a return move by the opponent to get those four stones…

The game still works well with multiple players, and I have enjoyed it with four (still online at Tabletopia) – but it does feel a bit different.   There are fewer chances to score each game… while the second board does give more spaces on the counting track in a 4p game, there is not double the number of spaces, so you effectively score less.  I found that I needed to be focused more on the high scoring combinations in order to be competitive.  Also, there is a little bit of the unavoidable binding issues as happens in all games…

The game is currently rated at 30 minutes, and I feel this is a fair representation of the game.  Individual moves can go quickly, but there are certain times when you really need to step back, look at the board situation and try to plan a few moves ahead.  I have found it to be a nice challenge to picture what the board will look like after my current move, and then try to predict what my opponent will do, so that I can perhaps see what my next move will bring me.  This is especially important as the highest scoring moves depend upon specific tower heights in specific spaces on the board.

Filip told me that the production pieces will be similar to the tiles in Azul, and if so, I am already drooling at the prospect of that.  I have definitely enjoyed my games thus far, and I think it would be even better with the physical pieces!

I know that it’s early in the game, but so far, this is a front runner for Spiel des Jahres 2021 in my eye.  It’s easy to learn yet deep in strategy; and if the physical production is as promised, it has that certain table presence that the current jurors seem to like.  This is one I am definitely keeping an eye out for next year!

I’m sure that Board&Dice will be demoing this at Spiel2020.digital, and I recommend that you check it out there or on Tabletopia!

Dale Yu is the Editor of the Opinionated Gamers. He can occasionally be found working as a volunteer administrator for BoardGameGeek, and he previously wrote for BoardGame News.
View all posts by Dale Yu →
This entry was posted in Essen 2020, Reviews and tagged Essen 2020. Bookmark the permalink.