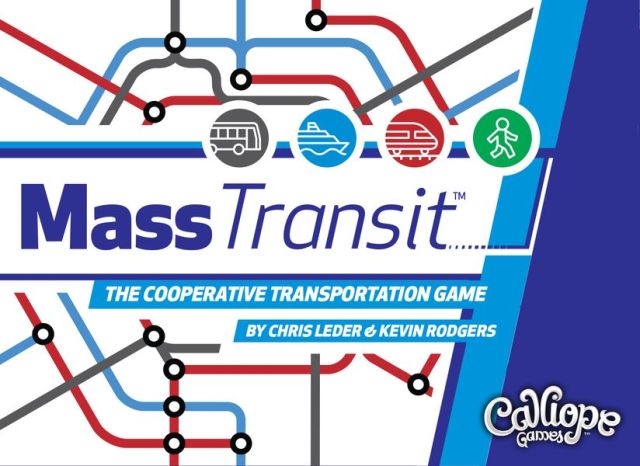 I will admit that one of my “holy grails” is finding a great transportation game.  One of the first games that I truly loved as a kid was Scotland Yard, and I fell in love with the idea of moving around the board using different modes of transport, etc.  Later, I tried to find and then later design the perfect cabbie game, moving around a city, picking up passengers and dropping them off at various different locations.  On the Underground was another game that I adored though you only walk and ride the Tube in that one…

Mass Transit immediately appealed to me when I saw the title and the schematic art suggesting of a train line network.  In this cooperative game (which can also be played solo) – the team works together to get the six commuters home from their jobs in the Big City to their homes in the suburbs.  The Big City is made up of a puzzle piece board (made this way so that it fits into the tiny box!  The six commuters are placed on the spaces on this board. 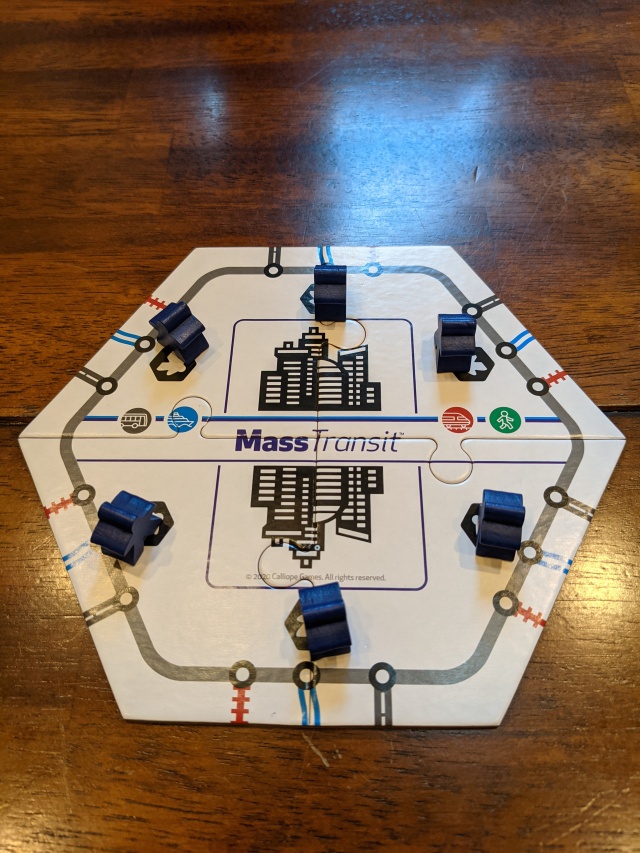 The rest of the game is found in the 52 cards – 6 of these cards are Suburb cards (2 for each of the three different transit types) and the rest have tracks for the three lines (red train, blue ferry, black bus) – these lines may have stations on them, may have traffic stop icons on them, and some of them may even terminate at a station!  The tops of the cards show a type of transit (which is used for movement), and some of them have exclamation points on them as well.

Each player gets a hand of 4 cards to start the game, and there is a mulligan rule in play – if you get 3 suburb cards in your initial hand, you are to discard them, draw 4 new cards and then shuffle your discards back into the deck.  Otherwise, the deck is never shuffled or renewed in the course of the game.

Any player may volunteer to start, and once that player goes, play goes clockwise for the rest of the game.  On a turn, the active player must play at least two of his cards (and can play as many cards as he/she likes).  You can play a card either to extend one of the six routes OR to move a commuter.  To extend a route, simply place it on at the end of one of the six routes coming out of the city.   Also, if you have a card with a red exclamation point on it, you are obligated to play that card on your next turn. 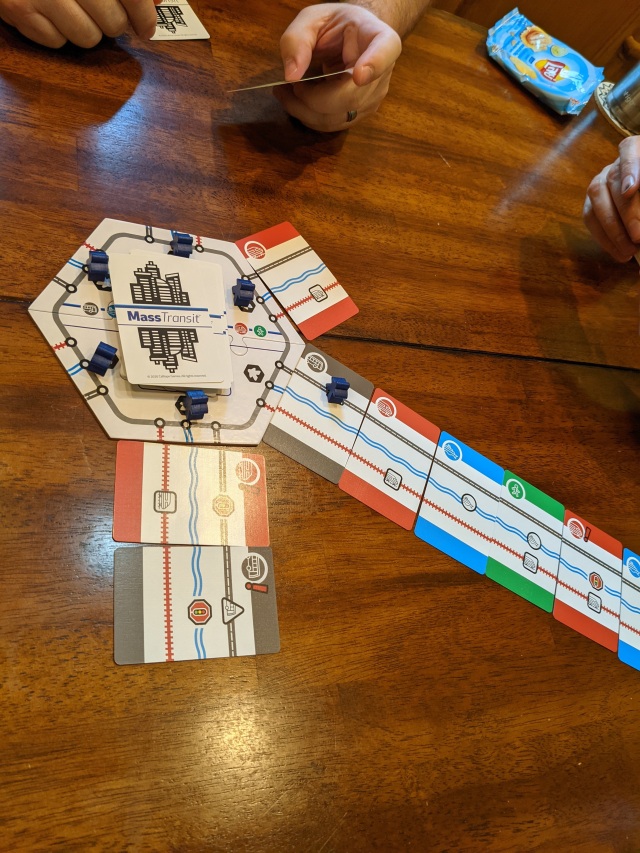 If you want to use a card for movement, you refer to the stripe at the top of the card – and you may move any one commuter towards the end of the line via the type of transport specified on the card.  If you play a walk card, this means moving it to the next card on the route.  However, if you play one of the three transports (train, ferry, bus) – your commuter moves all the way from the station/traffic stop on the current card down the line to the next station or traffic stop of that type.  This also means that you cannot play a transport card unless there are 2 stations of the right type on the line.  If you hit a traffic stop, your movement stops there, and cannot continue on until another card of the same type is played.    If your movement ends on a suburb card, that commuter is home and is not moved any further.  A suburb card tells you the minimum number of cards (3 or 4) which must lie between itself and the Big City — because, you know, no one wants to live too close to the city!

Once the active player has played at least 2 cards and doesn’t want to play any more, they pass and draw their hand back up to 4 cards and let the next player clockwise take their turn. While you are playing, the rest of the team can communicate, but in a limited fashion.  No one is able to explicitly say what they have in their hand and they cannot specifically suggest what any player should do on their turn. 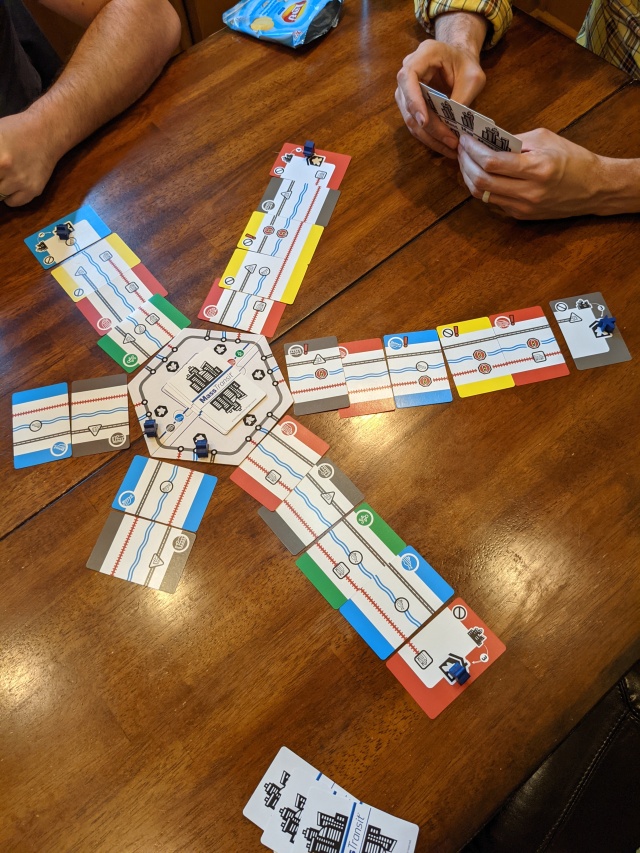 The game is immediately won by the team if all six commuters get home.  The game is lost if any player is unable to legally play 2 cards on their turn – generally because they don’t have enough to play.  The deck is never reshuffled so it is possible to simply run out of cards as a group.

The game can also be played solo – in this case, one player has a single hand and takes all the turns.  There really aren’t any other rule changes.

Mass Transit is an interesting game, but I think it doesn’t end my quest for the perfect transportation game.  It provides an interesting cooperative challenge, and it’s an interesting exercise in efficiency, made more challenging by the dreaded “limited communication” rule.

The picture on the front on the box was a bit misleading for me – on it, there is a spider web like network of transport lines weaving in and out of hubs.  When I first saw that, I was hoping for the team to be able to construct such a network.  However, the game uses a much simpler sunburst pattern with six rays emanating from the Big City and heading out to their respective suburbs in straight lines.

The team needs to work together to get efficient movement set up.  Trying to get stations which are two or three cards apart may help get the commuter most of the way home with a single movement card.  Interestingly, the Big City has NO stations in it, and every commuter must start their travel home via a walk onto the first card of their line.  It definitely helps to try to have a station on the first card played on each line to allow for the opportunity for distant movement…

Of course, the exclamation point cards will gum things up as they have to be played on the turn immediately after they are drawn, and generally they are the sorts of cards you don’t want to immediately play (as many of them throw traffic stops down on your lines).  And, you should definitely not forget that each of the suburbs has only a single station on it, so you will need to keep track of which station types are available and make sure that you can get everyone home on the desired type of transport.

As with all limited communication games, I am generally not a fan of the vague rules around the idea.  I can hint at what I want you to do, but I can’t tell you exactly what to do.  But who is to say where that line is between hinting and exactly telling you?  So I can’t tell you exactly what cards I have, but if I hint well enough at them, aren’t I just telling you what I have?  Rather than try to figure that out, our group generally doesn’t discuss strategy at all, and we just rely on each other’s awesomeness at reading minds to figure out what to play. 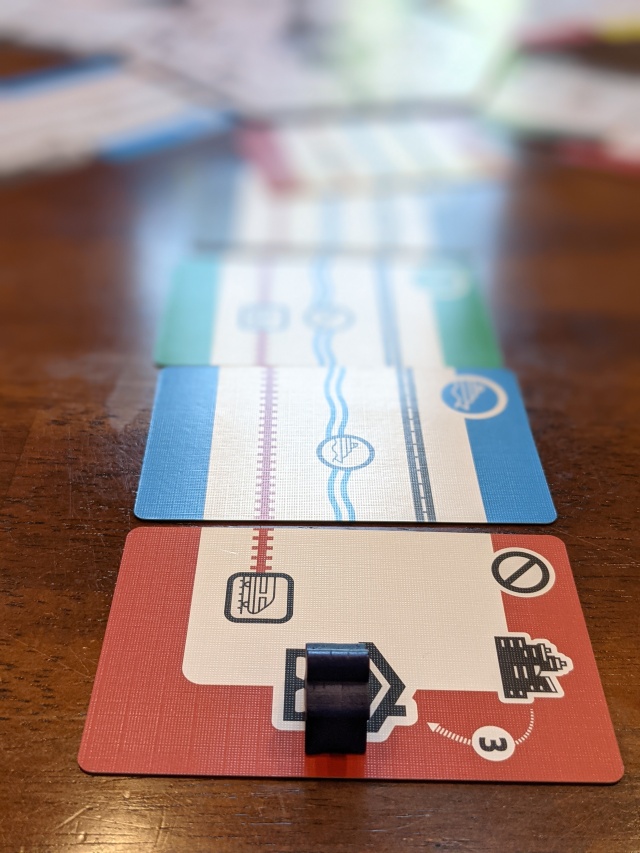 After a few games, you won’t need to communicate too much about the plan.  Once everyone knows that there are exactly 2 of each type of suburb, the goal is to then make two lines for each that have a station at the first card, then a long uninterrupted line that ends with the suburb station 3-4 cards out.  Of course, the exclamation point cards can throw a wrench in the works, but without those, the game would be “solvable”.

In any event, the game is quick, only taking maybe 15 minutes once you know the rules.  After all, there are only 52 cards in the deck, and each turn requires a minimum of 2 cards to be played – so that’s 26 turns max – and in a 4 player game, that’s 6.5 turns per player at the absolute most.  I’d say to expect 5 turns tops.  For some, that might be too quick, but for me, it’s the perfect length for this sort of game.

The solo game also turns out to be a decent challenge. In this setup, you control all the play, but you are limited to a single 4 card hand.  While there is a mulligan rule for starting with three suburbs, the game can become quite challenging if you get an early set of suburbs which you must wait to play, thus leaving you with little choice but to play all the rest of your cards on each turn.  However, as you’re in control of the whole plan, it’s easier to accomplish the goals that you set for yourself.

The artwork is clean and the icons are easy to parse. I really like the compact sized box that neatly holds all the components with very little air.  It’s not quite pocket sized, but it is easily transported.  It possibly doesn’t qualify for my restaurant game category as you will need a decent amount of table space for the sunburst of tracks.  Of course, you could dispense with the board and just set up six lines on the board all in a row and that would save a bunch of space (and then it would probably fit on a restaurant table or a pair of airplane trays).

I think anyone looking for a nice family weight cooperative game would enjoy giving Mass Transit a try.