The Three Little Wolves is a compact family game which takes the story of the 3 Little Pigs and turns it on its head somewhat.  Per the publisher – “Centuries after the famous story, the Swine family has learned a precious lesson, and become the greatest landlord in the world (They love houses!). The Wolf family, however, becomes the best architects of all time (They hate lousy houses!). The three little wolves now work for the Big Bad Pig to build all kinds of houses. Can you help the wolves build the highest house and find the best home for them?” In this game, players work to build three different houses – trying to build the tallest houses to gain the most points; however each player also needs to send their Wolves at the right time to achieve victory

The game has a deck of cards, mostly floor cards; 14 cards in each of four colors (red, yellow, green and white which is wild).  There are also 3 Big Bad Pig cards.  Each player starts with a hand of 5 floor cards as well as with three wolf tokens in their color. One of the Big Bad Pig cards is shuffled into the bottom 5 cards of the deck, and the other two are shuffled into the remainder.

Each turn is pretty simple – you first play a card and then you draw back up to a hand of 5.

When you play cards, you either play them to your buildings or the discard pile. As you play cards to your buildings, you are able to build 3 different buildings – one each of the three main colors (Red, yellow and green).  White cards can be used in any of the buildings.  As you build a building, each successive card must be of a higher value (though cards with values of 1-3 can be used as a basement and can be tucked under the lowest card).

If you choose to play a card to the discard pile, you additionally get to decide if you want to play a Wolf token to one of your opponent’s houses – most houses are only able to accommodate one wolf (two if that have a B3 basement card). Playing Wolf Tokens is a speculative move as the Wolf tokens will score bonus points if the house they occupy is alive at the end of the game.  However, if their house has collapsed, they will score negative points.

After the card has been played, then it’s time to draw.  If you draw a floor card, your hand is back up to 5 and your turn ends.  However, if you draw a Big Bad Pig (BBP) card, this card doesn’t go into your hand and you must resolve this immediately (and then later try to draw back up to 5 cards in your hand).  You take the lowest valued BBP token (numbered 2, 3, 4) and put it on the tallest house (the one with the most floors) that isn’t yet occupied by a BBP token. Each of the BBP cards has a special effect on it which may cause players to pass cards to each other or immediately send a Wolf into an opponent’s house.  Once the BBP card and effect is resolved, draw another card to bring your hand up to 5.  Then the next player goes.

The game continues until the third and final BBP card is drawn (it will be somewhere in the final six cards).  The most valuable BBP token (worth 4VP) is placed on the highest building that does not yet have a BBP token.  In this final case, the special ability of the BBP card is NOT resolved.  Instead, the game goes into the endgame phase where each player has two more turns where they only play a card each turn, and no more cards are drawn.

Now, the game moves into scoring. First, if any buildings do not have a specific color (i.e. only have white cards played to them) – they are automatically demolished.  Then, compare all the Red buildings of the players.  If there is one building that is the shortest, it is demolished.  If there is one building which is the tallest in the color, it gets the Tallest House token for that color, worth 3VP.  Do the same for the Yellow and Green buildings.  If there are Wolf or BBP tokens on a demolished building, they are all flipped over to the -1VP side.

Thoughts on the game

The Three Little Wolves is a nice family level game.  There isn’t too much strategy in the game, but enough to keep things interesting for veteran gamers and enough to help younger players develop strategy and timing.

There is some planning that needs to be employed as you build the houses.  As the players share the single deck of cards, you can figure out the likelihood of particular cards being available to you as you watch cards being played to the table by your opponents.  As you would expect, you do have a fair amount of time to wait out cards close to your current values – but you can’t wait too long as you are limited to playing a single card in any given round, so you need to make sure that you play them early enough.  In a 4p game, there are 9-11 turns per player, so you don’t have too much time to wait.

Additionally, you’ll lose a few turns if you choose to discard to play your wolves into an opponent’s house. As they can be worth as much as 5VP, you probably want to play them if you can – but you do risk a 1VP penalty if their house is demolished.  I have even seen some interesting defensive play where an opponent has chosen specifically to not build a building so that it was demolished and I lost a 5VP bonus (actually a 6VP swing because the wolf ended up being worth NEGATIVE 1VP!) 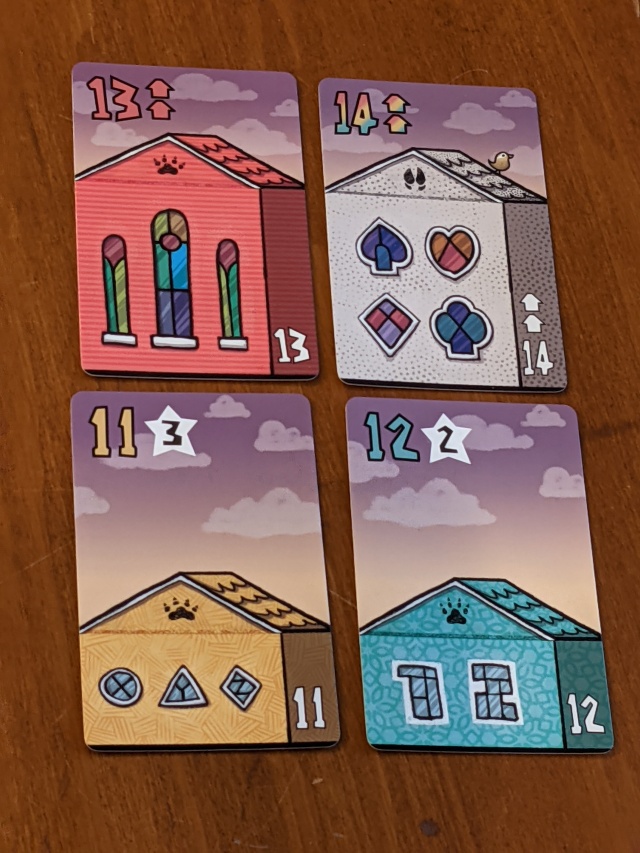 Having a hand size of five gives you enough options on any turn to have something to play, and gives you enough room to wait for the right cards to be drawn into your hand for a later play.    Each suit has some cards with special abilities, and this adds a bit of spice to the building process.  At the higher values, there is an interesting challenge as the 11 (3vp) and 12 (2vp) offer bonuses, but the 13 and 14 count as 2 floors which can lead to a clinching win for the tallest building contest.

I think that this game does what it wants – providing a nice light family level game.  There’s nothing spectacular here, but this is a great game to have around after family dinners, birthday parties, etc.  Would definitely recommend it for similar gaming situations.

1 Response to Dale Yu: Review of The Three Little Wolves