If you’ve ever heard the terms Illuminati, New World Order, or the Power behind the Power and thought to yourself, “I don’t want to be a politician…I want to be the person controlling the politician,” welcome to Gray Eminence.  In Gray Eminence, you ARE the power behind the power, controlling world affairs, sending countries into chaos or bringing them back from the brink of war.  Do you do it out of the good of humanity?  Or for your own nefarious purposes?

In the game, players become “Gray Eminences”  You make decisions on world affairs each turn to either help the common goal of the current event, or to help further your own ambitions and goals.  Sometimes and often you do both. There are several different Gray Eminence characters with asymmetrical starting resources, goals and powers that are based on people from the past couple of decades from now back to the Cold War.

The object of the game is to work with the other world influencers to help resolve events while simultaneously pushing your own agenda (often at those other player’s misfortunes) to gain victory points.  Whoever has the most victory points at the end of the game, wins!

The game is played over 5 or 8 rounds (decided if players want a longer or shorter game).  During each round, players will play through 9 phases.

A.  At least one player will be In the Public Eye.  They get to go first, but people can see what they are doing.

B. Next, 1-3 players may be the Gray Eminence.  These players may or may not be helping out the world.  It’s difficult to tell.  It looks like they are, but…not everything as it seems.

C.  Finally, at least one player must be In the Shadows.  These players are nefarious and use underhanded treachery to push their own agenda.

First, let me talk about the good:  The player meeples/ pawns are awesome!  They are unique and add a little visual flavor to the game.  Each meeple is matched with a box (we’ll talk about the box momentarily) and a player board.

The player board spells everything you do in a round right out in front of you, which is great!.  And you do quite a bit in a round.  This is not unique or new by any means.  It’s just that they did it right.  And players don’t have to keep looking at another card laying off to the side to figure out what’s going on in the game.  DPP prints it on each player board and walks you through the turn with enough information that you (hopefully) don’t get lost.

For the most part, the components are of a good quality.  The variety of cards are good quality, easy to read and fairly easy to follow once you get used to the icons. 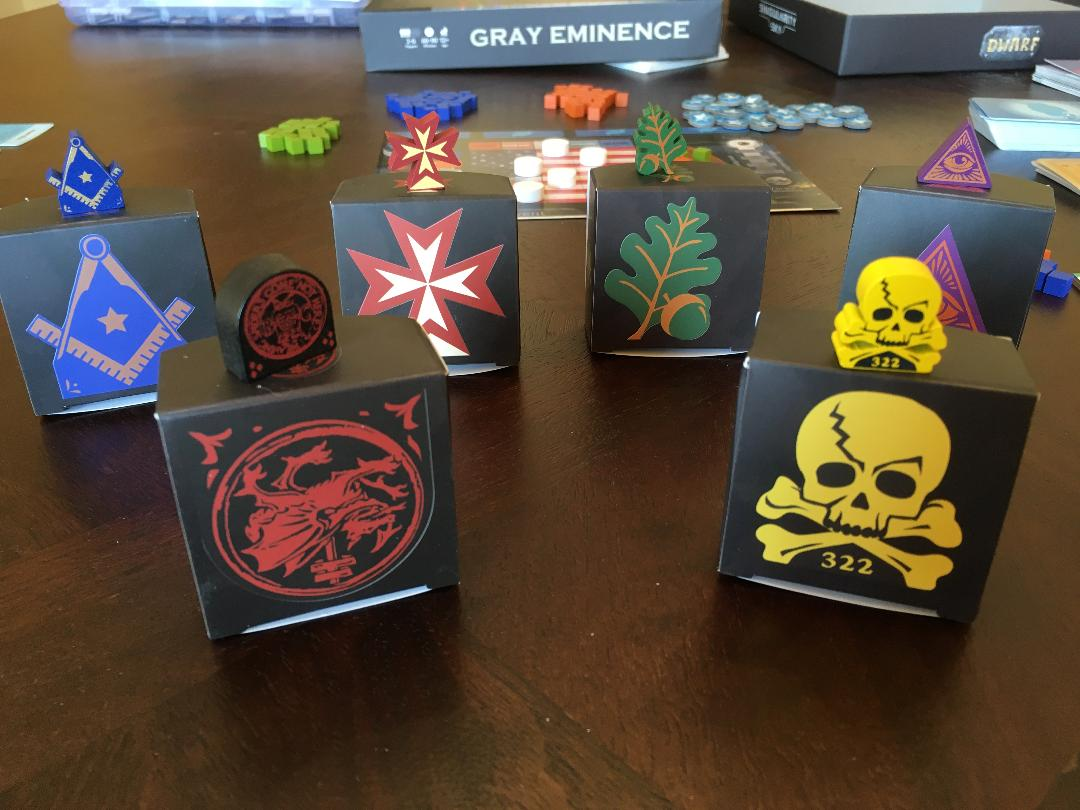 Now for the bad:  The rulebook is not horrible, but it is very crammed and written in a very small print so it comes out looking very cluttered and difficult to read.  If they’d gone with a slightly larger rulebook, things would have been much better.  There’s a number of references that refer to types of cards and in one section will say “#EU” cards but then not have any cards that have a #EU, but rather are color coordinated, which can get confusing when first learning the game. I am of the opinion rulebooks should be as clear and helpful as possible. This is a small hinderance, but still can still be frustrating. Once you’ve looked through the cards, realizing that there are no #EU marked cards, but rather a color coordination, it flows a lot better. That being said, it’d been way easier if they just marked the specific cards with a #EU (or #whatever for specific types of cards) Anyway, It’s laid out fairly well, but could have used a good producer to edit and have it flow a bit better.

As mentioned above, each player gets their own storage box to keep their resources in.  The boxes look nice, but they’re not particularly sturdy and unless you have itty-bitty fingers and itty-bitty hands, getting the resources from the box becomes an arduous task, especially when you do this every round to pull resources for a secret bid.  DPP would have been better off just creating a sturdy player screen.

And these tiny cubes…why?  Ok, they are decent quality tiny cubes, but they’re still tiny cubes…

MECHANICS:  Gray Eminence uses a variety of mechanics that are tried and true, including action-selection, bluffing, auction, and trading.  While none of these mechanics are new or innovative, designer Ren Multamäki does an excellent job mixing them into an interesting game that would make you think it is an Ameritrash game immersed in a political intrigue theme, but is really a disguised Eurogame…immersed in a political intrigue theme.

TIME, AGES & PLAYER COUNT:  60-90 minutes plays about right for the game, though for a first game, I would add on 30-60 minutes just because there can be a lot of questions as you get started running through the first couple of turns.  I think the ages on this could be 12+ (as opposed to the recommended 15+) but that really depends on the youth and their interests.  I play with a buddy of mine who’s high school son claims he would have loved the politics in the game when he was in middle school just as much as he does now as a senior.  I initially tried playing this with my wife and a dummy player to get a feel for the game, but you really do need the 3rd player.  Add in a couple more and it works just as well without bogging the game too much.  Adding the extra players beyond 3 adds intrigue because it’s more difficult to guess who’s messing with the events and trying to push their own agenda instead of the common good.

ARTWORK:  Artist Lars Munck does a nice job with the art in the game.  Nothing too over the top but his artwork works great creating a feel of political dealings going on behind the scenes, making world events happen.

FINAL THOUGHTS: I’ve only gotten the game to the table a couple times as Germany has been opening up again for people to get together over the last month or so.  That being said, this game is one of the few games that I am really looking forward to getting back to the table each time.  It is fun, and has a nice variety of different things you can do during the game to get victory points.  There are several interesting elements going on and with my limited plays, I am enjoying the game, but really want to get more plays in.

RATINGS:
I Love it!

Like Loading...
This entry was posted in Reviews and tagged Dragon Dawn Productions, politics. Bookmark the permalink.