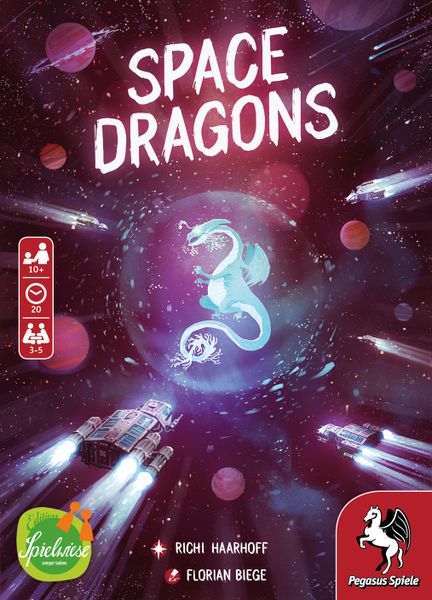 Per the rules: “Welcome, daring ones! Are you ready for a flight into the galaxy of the notorious space dragons? You will need to assemble your crew before take-off, but then what? Will you capture a dragon or patch up the ship before it blows up in your face? Activating shields may sound boring but doing so could boost the mood of your crew — and thus earn you those last few victory points!”

This innovative card game combines drafting cards to generate your hand, and then some interesting game played during the trick taking portion. a total of 7 rounds will be played, and the player with the most points at the end will be the winner.

The deck of crew cards is numbered from 1 to 80, where there was Stations of the crew members on the front side. There’s also a small deck of Dragon cards which are used to represent the tricks in the game. 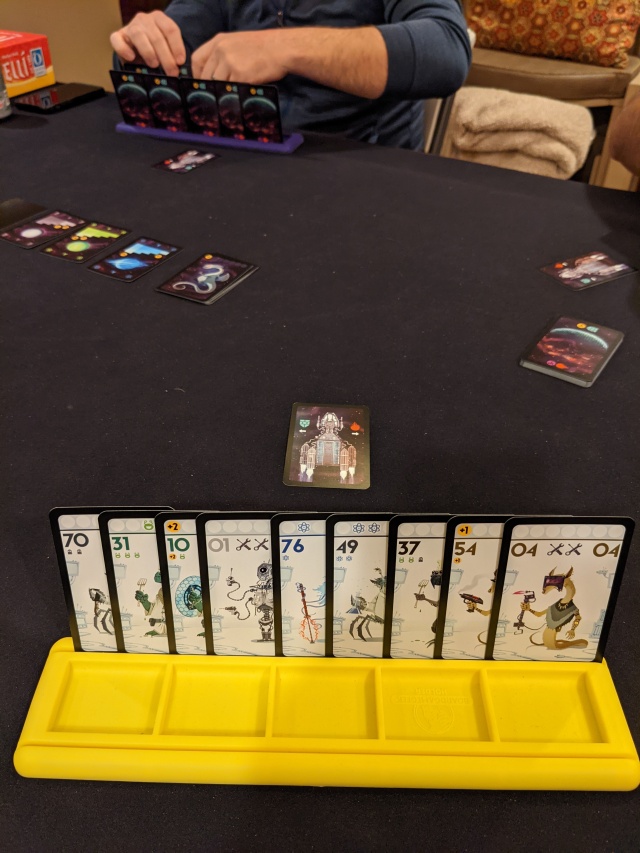 To set up the game, each player is dealt a hand of 9 Cards from the crew deck. The remainder of this deck is placed face down on the table to form the Draw pile. the smaller Dragon deck has been shuffled and 7 cards are placed face down from this deck to form to Dragon’s Lair. The top card of this pile is then flipped over so that all players can see the first dragon they are fighting for.  Each player then gets one of the remaining Dragon cards, which they flip over to show the spaceship side. The spaceship card is placed face up in front of the player on the table. Try not to look at the dragon side when doing this. Finally, place the scoring cards in the center of the table. These cards are double-sided and you can either choose which side to play Within the game, or do it randomly, or in your first game use the A side. 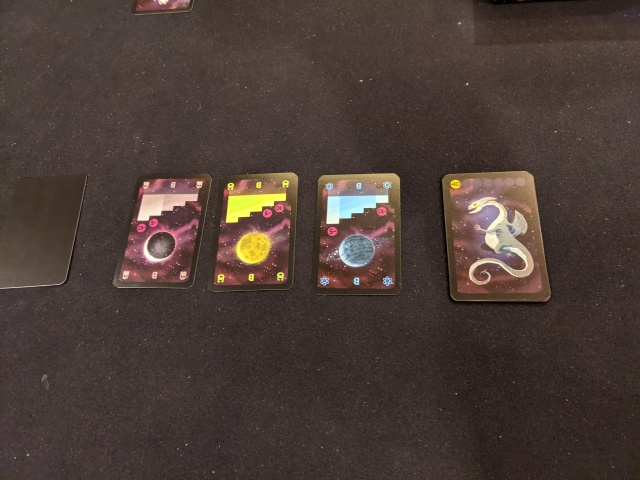 The game is played in two phases. In the first phase, players will hire the crew for their spaceship by drafting cards. Starting with the initial hand of 9 cards, players will look at them, choose one to keep for their crew by placing it face down on the table in front of them, and then the remainder of their hand is past to the player to their left.  This process is then repeated with the next bunch of cards, and so on, until each player has 9 face down cards in front of them. At this point, players can take all their cards up into their hand and the game moves on into the second phase.

The second phase of the game is the Dragon Hunt. the starting player chooses one of the cards from their hand and plays it face up in front of themselves. play continues clockwise around the table with each successive player also choosing to play a card from their hand to the table. in general, if there is a special effect shown on the crew card, it is carried out immediately. the exception to this rule is the Crosshair icon. This particular icon is only evaluated at the end of the round, once all players have played their cards. More on this later.

If you see the red damage symbol, remove one shield from your spaceship to represent the damage taken. If you do not have any Shields, take a card from the crew deck, place it underneath your spaceship with the right Edge showing so that you can see the damage icon.

If you see the tool icon, remove one damage from your spaceship reach tool seen. If you are spaceship does not have any damage, there is no effect. 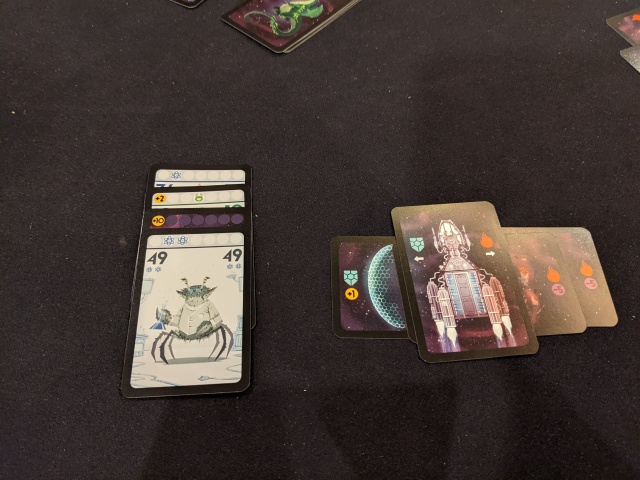 Remember that the above three icons are resolved as soon as the card is played. Now back to the Crosshair icons. These are only resolved when all players have played their cards because they only affect the player with the highest card played. This player will claim the dragon card for the truck, but they must also remove one Shield if possible or take one damage to their spaceship for each Crosshair played by the other players.

Just like the cards from your hand which are played, any Dragon cards which are one remains face up on the table, many of them have scoring symbols on the top of them which will come into play in the final scoring.

At the end of the round, after all Crosshair symbols are resolved, the player who has played the highest numbered crew card wins the trick, and this player takes the face up dragon card from the top of the pile, and places it face up in their area. The next card from the dragon deck is flipped up so that all players can see it, and the player who won the previous trick starts the next one.

First look at the 3 scoring cards. These will reward players for the relative standings in science icons, mood icons, and crime icons. Each side of the card is slightly different, so be sure that everyone understands the scoring rubric for each of the three types. Additionally each dragon card has a point value. There are also small plus or minus scores on some of the crew cards. Finally score points as shown on the shield and damage cards underneath your spaceship. The player with the most points wins. Ties are broken in favor of the player with the most dragons.

Space Dragons is a neat little game.  When we first tried it at gamenght, we played it multiple times in a row.  First and foremost, you should know that it’s a short game.  The whole thing is only 7 tricks – and while there are definitely some decisions to be made in the card playing – the whole thing plays out quite quickly.  In fact, if you use the traditional drafting rules as noted above, you might spend more time choosing the cards you want to play versus actually playing them!

The game describes itself as a trick-taker, and I suppose by a strict definition of it, you are playing tricks as each player plays a card and a winner is decided by rank… but, the rules of the game as such that some of the time (heck, much of the time), you’re not trying to win the trick but rather play a card for its special effect – which makes it feel very different from a normal TT.

In this game, much of your game is planned through the draft.  You know the scoring conditions at the start of the game as far as the card icons go – and your strategy towards these goals is pretty fixed; you can only play the cards in your hand, and generally there isn’t much that your opponents can do to directly affect that.  Sure, you can get some icons on Dragon cards – which sometimes can be unexpected – but otherwise, you’re playing 7 of the 9 cards that you have drafted.  The system can also be somewhat limiting because you really don’t have a lot of ways to change your path after the draft either – because, again, you’re stuck with the cards you have drafted. 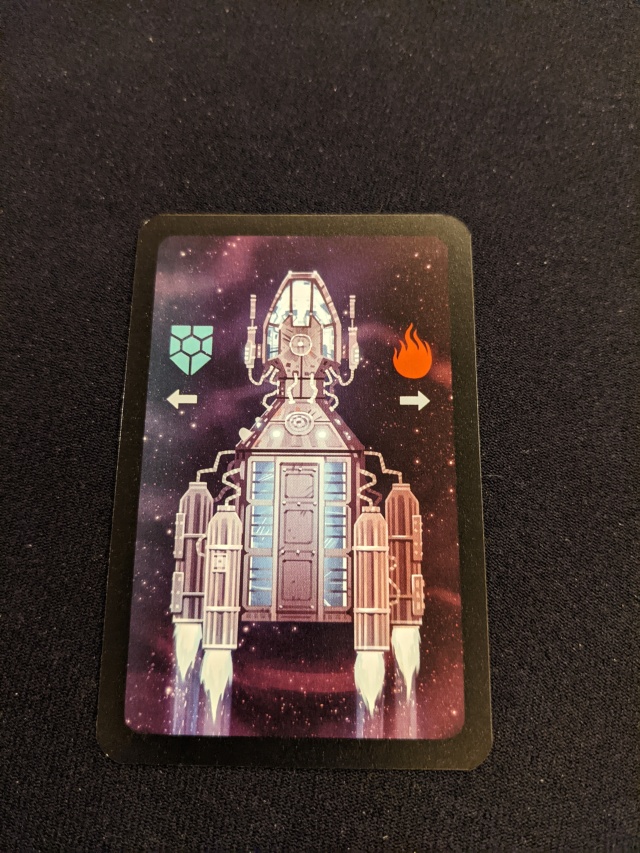 Most of the important information of the crew card is seen at the top of the card. There is an upper row which shows icons referring to scoring characteristics as well as plus or minus points. below that, you can see the number of the card as well as a mini representation of the scoring icons. This is a clever system, which allows Stacked Cards in front of the player to show all of the important information, however the miniature icons near the number allow players to see all of the important information while fanning the cards out in their hand. This is remarkably good graphic design, and something which many card game seem to miss. Over the past year, I have played a number of card games which have infuriating single index cards or other graphic abnormalities which make it more difficult to play the game.  The only thing that I think could improve the game is a scoresheet – as there are a fair bit of calculations to sum up your score – but using a phone app isn’t that big of a deal.

In the drafting version, you play the cards from your hand, often just trying to get the icons you want on the table or maybe to get shields up to protect your ship.  It’s nice to do this early on because anytime that you win a trick, you’re very likely to take damage (either from your own high card or from the Crosshairs from your opponents.  If you are foolish enough to start a trick with a high card, you can almost be assured of getting three Crosshairs coming your way.  As each ship damage is a 5VP penalty, this will almost always negate any bonus you get from the dragon card that you gain (which has 8-12 VP printed on it).  Sometimes, you’ll unexpectedly win a dragon – say with a card in the 30s – because everyone else ducks your low card; so be aware of this when choosing your card! 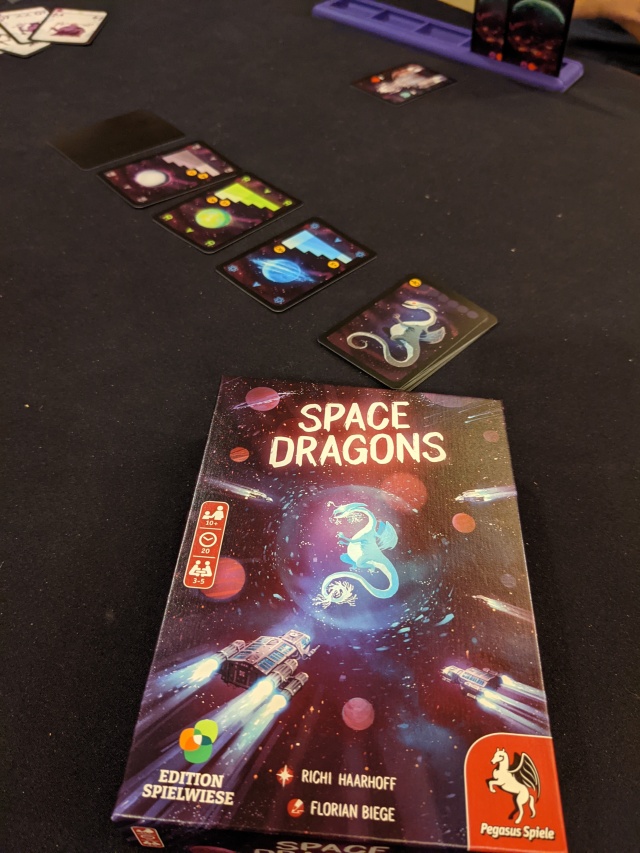 After multiple games, I have found that I much prefer the variant found in the rules – namely a version that eschews the draft at the start.  Instead, each player is dealt a hand of 9 cards, you play a card towards the first trick, and then you pass your whole hand to the left and then play the next trick with the new hand that you receive.  This version is a bit more tactical, but I think it also is a bit more interesting because you have the opportunity to maybe change strategies a bit more; it also adds an interesting memory/anticipation aspect to the game as you can try to make plans with cards that you hope to see when that particular hand comes back around!  It doesn’t shave that much time off the total game as I think players spend a bit more time each round examining the cards in their current hand and trying to figure out what the best plan is – but it is more interesting to me.  In the future, I’ll likely request to play with this variant when we play Space Dragons.

Space Dragons is a great little card game, and one that I think will stick around in the game collection.  I like the tactical play, and the scoring cards and somewhat varying nature of the Dragon cards makes each game play out a little different. It is quick to play but definitely gives you a lot to think about with each play.  I very much like this one, and with more plays, this could be one I love.