HELP! Is one of this year’s traditional card games that always appear at the SPIEL convention.  There are usually two to four games in this little double deck box, and when I’m at the fair, I routinely come home with one or two of them each year.  This year, I am not at the fair, but the great folks at Amigo sent me at least one to play.

In HELP! players play cards to a common row, always trying to play a higher value card to the right of the row.  If they cannot play such a card, they are allowed to ask their neighbor to their right (who just played) to trade a card which can be played.  If this cannot happen, both the active player as well as the neighbor who could not help lose the round, and all other players gain a point.

That short paragraph honestly describes most of the game, but here’s a bit more detail.  The deck of 105 cards has numbered cards from 1 to 11.  There are also 4 types of special cards (No!, Switch, Wild and Zap!).  This deck is shuffled and each player starts with a hand of 4 cards.

As mentioned earlier, when it’s your turn, you have to play a card to the right end of the line, and it must be higher in value than the card at the end OR play a special card.  If there are no cards in the line, you can choose to start the new line with any card from your hand.  If you are unable to play a card, you must ask the player to your right to help you – if he has a card you can play, he gives it to you, and you must return the favor by giving him any card from your hand.  After you play a card, draw the top card from the deck to replenish your hand to four.  If you have played the sixth card to the row, all of the cards in the row are discarded and the next player starts with any card of his choice. 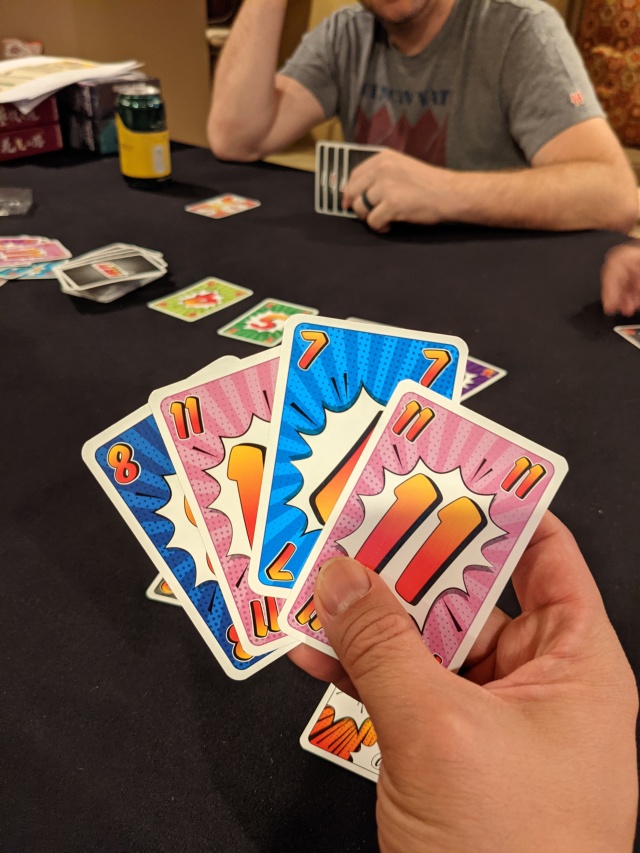 So what are the special cards?

No! – the No card is played in front of you.  It counts as your card played for the current turn and forces you to also skip your next turn.  While the No! card is in front of you, it is as if you are not in the game.  If your left hand neighbor needs to ask for help, that request bypasses you and moves onto the next player to your right.  After you skip a turn, the card is discarded at the start of your next turn.

Switch – This lets you swap one of the cards in the row with one from your hand.  After you switch the cards, the row must still be valid – that is the cards must go in ascending order from left to right still.

Wild – The wild card can stand for any number between 1 and 11.  It can be played at the start of the row, the end of the row, and even between two cards (taking on the value of 1 more than the card to its immediate left.  As such, it can never be played between two consecutive numbers as it can’t fit – it must be an integer!  A wild played to start a row is always worth 1.

So how does a round end?  A round ends when a player cannot make a legal play AND he received no help to make a play.  In general, the active player and the neighbor who couldn’t help both lose the round.  All other players score a point.  There are little scoring cards which are rotated to show your score (from 0 to 3).  In the edge case where all other players have a No! Card in front of them, and the last player is hung out to dry and cannot even ask for help, that abandoned player is the only one to score a point if the round ends on his turn.

If another round is to be played, shuffle the cards, deal 4 cards to each player and change the direction of play.  The game continues until someone has scored 3 points.  There is no tiebreaker.  If multiple players get to 3 points on the same round, they all win.

As you are probably aware, AMIGO releases a number of these small card games each year at SPIEL, and when I am there, I almost always come home with 1 or 2 of them.  This was the one recommended to me by the press folks, and I’m glad to have had a chance to play it.  The rules are simple, and when reading the rules, they almost seem TOO simple.

The hook in this game is being forced to ask for help when you can’t play a card.  This adds an interesting dimension to playing cards from your own hand.  You oftentimes don’t want to play your “best” card on your turn, as you need to be quite aware of the possibility that the next player in turn order is going to have to ask you for help…. And if you are unable to provide that help, then you’re going to lose the current round too!

The special cards are well designed to help you out in different ways.  All but the Switch guarantee that you can play legally no matter the board situation – but again, none of them guarantees safety because the next player in turn order also has to be able to make a legal play.  I will say that the rules for the No! card are a little confusing at first as it counts for your card play on the current turn and then forces you to skip your next turn.  We had to declare a house rule of playing the card sideways on the first turn and then turning it upright on the next turn so that we could remember where we were in the cycle of passing…

Interestingly, the board resets after six cards are played to the tableau, so the game could theoretically go on infinitely – but in reality, we almost never see more than 2 wipes of the tableau before someone ends up in a bad place!  That pace keeps everyone on their toes, awaiting the inevitable request for Help!

The result of this arrangement is a zany game where you sometimes feel like you have things under control, and other times where you’re just drawing from the deck, praying to get a card that will work on your next turn…   And then the laughs/groans that are sure to follow…

Help! is a whimsical card game that is great for a opener/filler/closer.  The game is quick, filled with laughter, and doesn’t outstay its welcome.  Our games clock in closer to 10 to 15 minutes right now, and that’s just right for this.  This is exactly the sort of game I’ve found to enjoy on my trips to SPIEL, a nice pocketsized card game that can be picked up at the fair, brought back to the hotel, and gamers can enjoy it within minutes.  Now if I could find somewhere to make me a doner pide for dinner to eat while playing the game :)