A slightly late write-up of my last, shorter day. The halls looked slightly less busy than Saturday and the show definitely felt like it was winding down as we headed into the afternoon. I had a chance to look at just one game as follows: 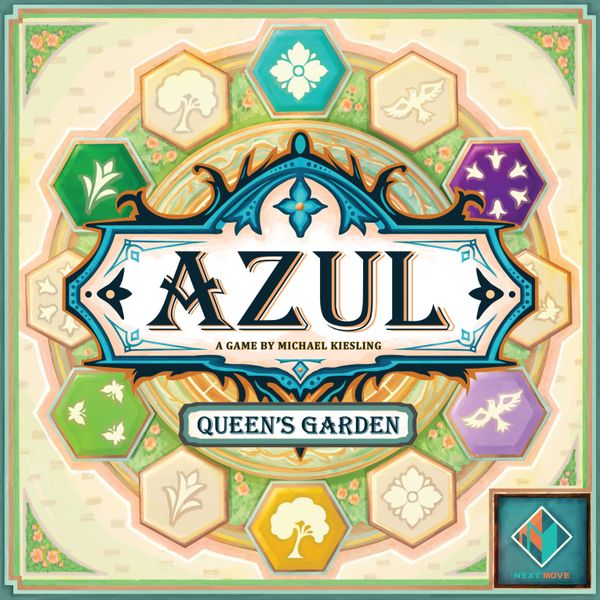 Ostensibly aiming to be more complex than Summer Palace, Azul Queen’s garden changes the basic mechanism of tile selection compared to the previous 3 iterations of Azul: now tiles are placed on top of a stack of cardboard tiles which are gaming pieces rather than just for decoration; and furthermore tiles are drawn only 4 at a time from the bag to place on the tile. As soon as 1 or more ceramic tiles are taken from the cardboard tile, it is moved to the side and the next lowest cardboard tile in the stack is populated with 4 new (ceramic) tiles. This goes on until all the cardboard tiles in the stack have been populated  – the stack size depending on the number of players. When a cardboard tile is empty, it is flipped to reveal a pre-printed symbol of the same type as the ceramic tiles on one of the 6 hexagonal spaces it has to place tiles. The cardboard tile also always depicts a water fountain in its centre – which I’ll come onto later.

When it is their turn, players may take all matching tiles: but in this version of Azul they can either take all tiles of one colour or all tiles with the same symbol on them. Instead of taking tiles they may instead move tiles they have previously taken onto their play area.

All tiles – both cardboard and ceramic – which are taken are placed on your player mat in a storage area which is limited – when there is no more space to store, you can’t take stuff. The ceramic tiles are hexagon shaped pieces which show both a colour and an image: the images are for example a tree; three butterflies, 5 flowers, etc. Like in Summer palace, to place the ceramic tiles or the big cardboard tiles, you have to pay other tiles which are discarded: e.g. for a tree you pay nothing; for the butterflies you pay 2 other tiles; for flowers you pay 5 other tiles,…etc. Each tile is worth a corresponding amount, so a tree is worth 1 point for example, but these shapes are only scored if in groups and only at the end of the game. A group can be 3 tiles with the same symbol or more; or 3 or more tiles with the same colour; and a group has to be made up of adjacent tiles. The cardboard tiles are used to expand your player area beyond the playable spaces that you start with, and also must be paid for in exactly the same way as the ceramic tiles, according to the symbol on them.

Like Summer Palace, Queen’s garden has a “surrond teh pictures to get a bonus” mechanic – in this case, you earn joker tiles in this way which can be used to replace any other tile; and you start with 3 jokers at the beginning of the game.

One last rule is the no duplicate rule: when you take tiles, or when you pay for tiles to go onto your mat, you can’t take or pay duplicate tiles.

At the end of every round, when everyone has passed, a small scoring takes place: initially you earn a points for certain colours and images on your tiles, and this changes each round so that certain images are worth 3 points in the last round – of course these are the ones which are most expensive to lay.

All in all Azul is a lot of fun, has the same feel as the other Azul games, and is a teeny bit more complicated. Trying to get groups of tiles in adjacent areas is tricky and fun and the game is very engaging. For me the acid test is that my wife played it and she does NOT like complex games or rules and she loved it. So I guess they passed!

Dale Yu is the Editor of the Opinionated Gamers. He can occasionally be found working as a volunteer administrator for BoardGameGeek, and he previously wrote for BoardGame News.
View all posts by Dale Yu →
This entry was posted in Convention Report, Essen 2021. Bookmark the permalink.