First Empires is a game that has been on my radar – both for the designer and the publisher.  We had played Mr. Vogel’s recent release, Kitara, last year, and it was a tense area control game that was enjoyed here.  The publisher of First Empires, Sand Castle Games, is a fairly new company, but their maiden release was Res Arcana – a game which has been very well received here as well.  Given the combination of those two things, First Empires was high on my list of games to check out in 2022.  I was quite surprised and honored when the designer contacted me to play and review his newest release.

In this game, the story goes: What if all of world history had unfolded differently? What if the great empires of our history had never come into being? What if other forgotten civilizations had passed into posterity in their place? The defeated could have been the victors, and the colonizers could have been the colonized — after all, empires are won and lost on a roll of the dice! 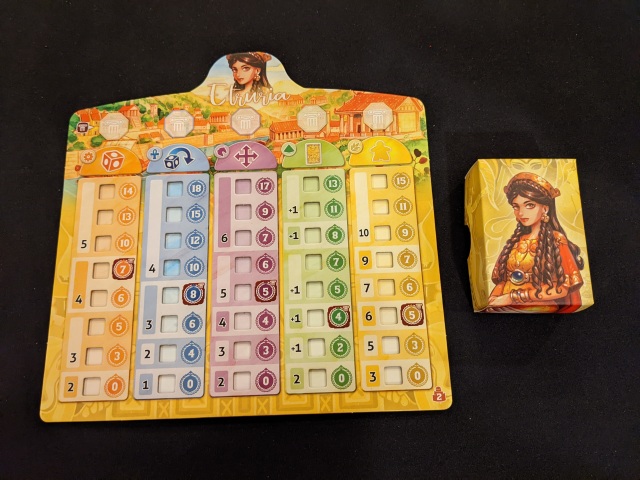 In First Empires, each player gets a unique civilization board, and they take on the identity of this ancient nation.  There are 5 attributes noted on this board, and each country has a slightly different arrangement of power and victory points on those tracks.  All tracks on the civilization board are marked at the bottommost space. Each player gets a deck of achievement cards in their color, and starts with one or more of these (based on their player board).  Over the course of the game, players will score points based on completed cards, points based on progress made on the tracks of the player board as well as points scored for control of cities from the board. 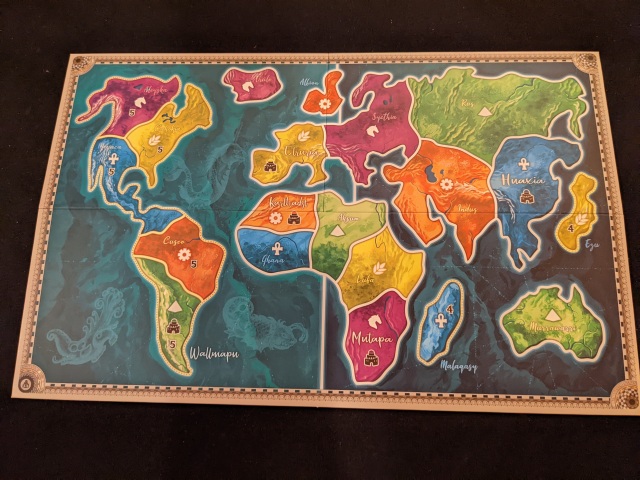 To set up, the game board is placed on the correct side for the player count as is the turn track board.  Each player places some explorers in their home region (all info coming from the civilization board).  Players shuffle their 6 city tokens face down, place one in their home region on the board and place the other 5 facedown at the top of each of the columns on their board.

On a turn, players go through 3 phases: Rolling dice, Movement and Conquest, Advancement.  The active player will complete all three phases before the next player goes.  (A game will last 7-8 rounds of this based on player count). 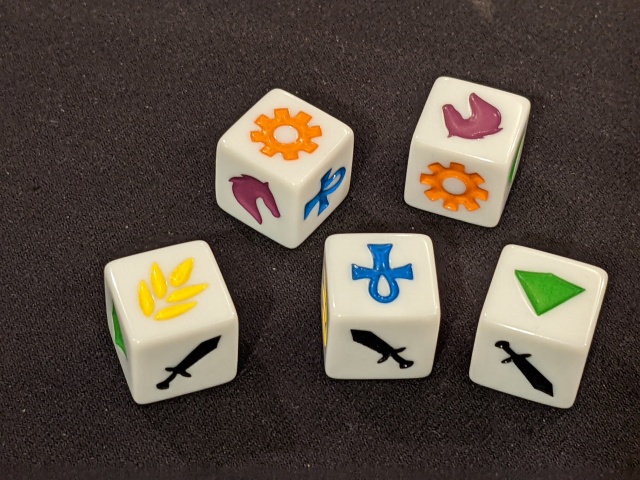 Rolling: Roll a number of dice as indicated on your orange column.  The dice have one face corresponding to each of the five columns on your board as well as a black sword side.  Then, you may choose to re-roll any number of those dice – and you may do this as many times as indicated on your blue column.  Afterwards, you have the option of discarding an Achievement card from your hand to convert any roll to a black sword.

Movement and Conquest: Look at your purple column to see how many movement points you get – for each, you may move one meeple across one land or one ocean border.  You can move where you like, though the rulebook suggests that you’ll want to move your explores into areas that match the symbol rolled on your dice.  You may not move through areas with opponent meeples though unless you conquer the region. To do so, you must bring more explorers than your opponent, though each black sword die face rolled counts as 1 extra explorer for EACH conquest that turn.  You must always have at least one actual explorer to conquer (that is, you cannot use only black sword rolls).  The defeated player takes all of their explorers and moves them to any other region on the board which has at least one of their explorers.   If you conquer a region that has a city token in it, you take the token and place it near your board – they remain face down until the end game, you may not look at the value until then. 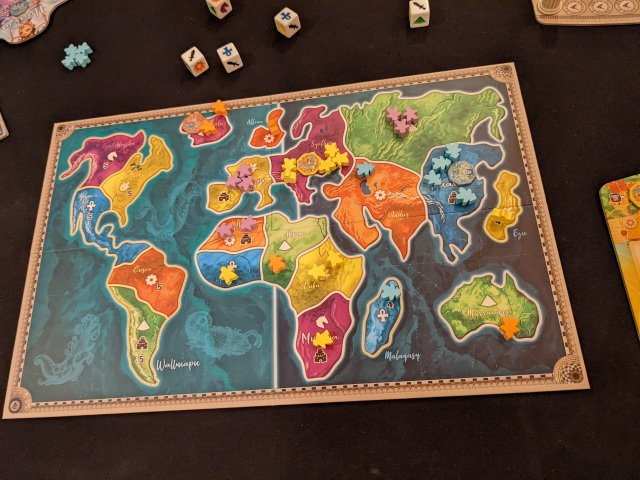 Advancement: At the start of this phase, players again have the opportunity to discard an Advancement card from their hand to chance a die to any face. This can be done until you have no cards left to discard.  Now, you can advance up each track on your board for each combination of die roll and matching region on the board which is occupied by your explorers.  If you have two die faces of a color, you will need to control two regions on the board in that color to move twice. To prevent confusion, place each die onto the board in the region that matches it.  If you raise on the green column, immediately draw a new Advancement card.  If you raise on the yellow column to a new area, immediately add the new explorers to any regions you currently control.  Each of the five columns has a space with a purple city outline around the score value.  If your marker reaches this space, you must place the city token from the top of this column onto the board, into a region that you currently control, in a region without a city if possible.  Finally, if you meet the criteria of any achievement cards you hold in your hand, you can score this by placing it face up under your player board. 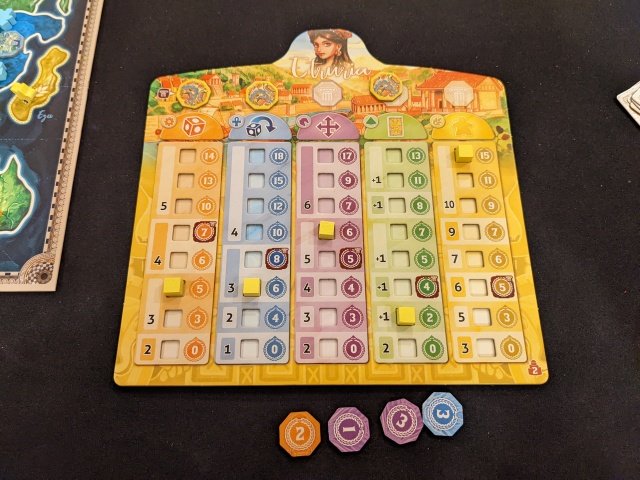 Continue this until all players have had a turn, then advance the round marker and keep going.  At the end of the last round of the game, players check their scores.

As I started this review out, I wanted to see this game as I liked the previous efforts of both designer and publisher, and this game did not disappoint!  The decisions each turn are interesting and there are many things for the player to consider when planning each move.

Like Kitara, there is an constant ebb and flow of meeples on the board.  Though there are constant conflicts, the pieces all remain on the board allowing players to mount an attack each turn to try to control the needed areas on the board.  Interestingly (for me, at least) is that the desirable parts of the board will change each turn based on the roll of the dice (and your manipulation via discarded Advancement cards).  Thus, every turn presents you with a new optimization exercise – trying to get your pieces in the right place. 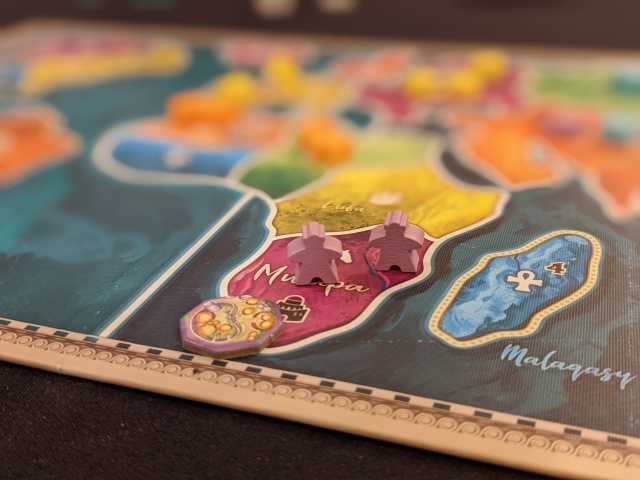 The main goal, for me, is to match the areas on the board with my dice so that I can move up on the tracks.  There is a two fold reward here – first you score more points, but perhaps more importantly, each move upwards helps your engine get more powerful.  All of the five attributes are important, and the rules actually counsel you to make a few improvements in each track to give you the most options going forward.  As each board is slightly different though, you will probably develop a strategy tailored to the strengths that your board provides whether it is to take advantage of earlier advancement or to score more points on a track for progress.

The use of Advancement cards can be crucial to get you where you need to go.  Of course, sometimes, you’d rather just score the card for meeting the criteria (between 2 and 6 points), though if you discard the card for a more beneficial die roll, you will recoup some of those points thru the tracks or from collecting city tokens.

Each player starts with an asymmetrical starting position as well as a starting region that reflects that.  Each kingdom will likely want to grow in a different manner at first based on the colors most proximal to them.  In our games, one of the colors starts with limited troop movement, and doesn’t have particularly easy access to purple (the color which grants movement).  We thought that this would be an issue, inhibiting exploration and whatnot – but this particular color came in first and second in the two games, so our preconceptions about this were wrong.  That being said, the map is fairly accessible, and with the right dice rolls (and modifications), you can get nearly anywhere on a turn if things go your way – so you will not feel like you’re ever trapped into a strategy based on your random draw of kingdom.

The game plays fairly fast, though there are clearly times when players will stop and think for a bit – there are a lot of things going on each turn; deciding what to re-roll, deciding if you need black swords or not, planning out your conquests on the map, and then how to move up on as many tracks as possible…  It should be noted though that there is not much to be done when it’s not your turn.  Sure, you may have to retreat some pieces from time to time, but on the whole, you can just kibitz with the other player who aren’t taking their turn.  For a lighter game, this is just fine, and our games have been relaxing and more social experiences.

The game is beautifully done, and the quality is just as good as with Res Arcana.  As a lover of compact games, I do applaud Sand Castle for making the game in a box that fits the components.  This could have easily been in a 12” square box, but that would put it at a higher price point and take up more space on the shelf.  I feel like they also put Res Arcana in the smallest box possible, and I do greatly appreciate that move.

The artwork is well done, and I must say that the storage is great.  The game comes with a custom vac tray, but more importantly, each player color has its own box to hold all of the bits of that color.  All the boxes fit snugly in the insert, and this keeps everything from moving around.  There is also a neat bit of detail in the meeples.  Each of the colors actually has a different shape to their meeple – something that a lot of other game companies would not bother to do.  It’s purely aesthetic, but it is a nice touch. 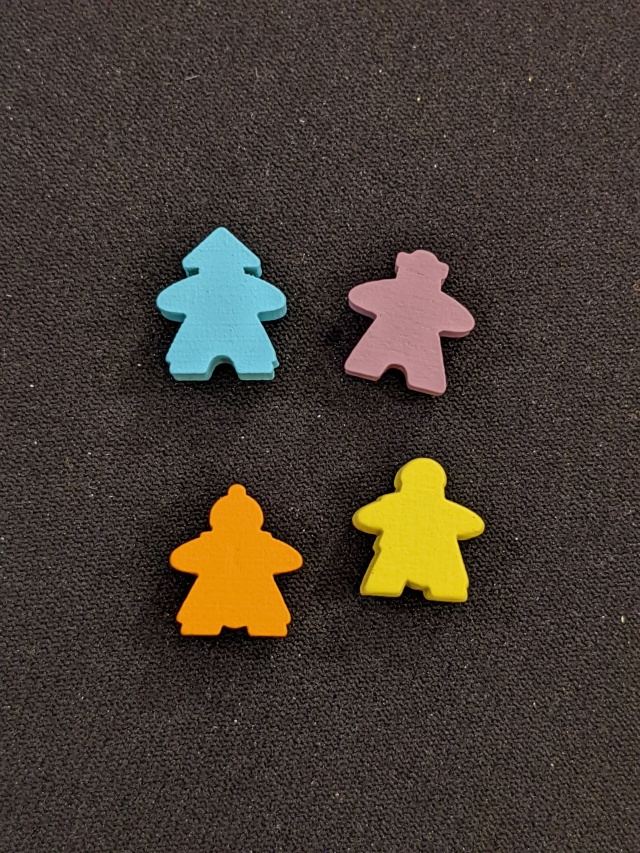 The rules are laid out well, and while they span 8 pages, they probably could have been squeezed in half as many.  The extra space is put to very good use though with lots of illustrations and a full turn example which helped me grok the gameplay just from a reading of the rules.

Thus far, I have been very impressed with the releases from Sand Castle Games, and at the current moment, I am highly anticipating any/all of their future releases based on the success of their initial offerings.