This past week was the two year anniversary of the first Weekend Gaming Retreat. Right on the cusp of the pandemic becoming the pandemic that we remember, a group of friends gathered in a farmhouse in Southwest Missouri to celebrate friendships through hours of board gaming. During that gathering we all started getting word about places closing, our workplaces making drastic changes and the world outside coming to grips, or at least trying to come to grips, with what was coming. We stayed in our isolated farmhouse and had a wonderful time and thankfully, nothing bad was passed among us. Last year for reasons there was no Weekend Gaming Retreat, but this year there was. It was a much needed reminder, for me at least, about the power of friends. It was good for the soul to sit and play games for approximately 52 hours with good people, sharing laughs around a table and occasionally outside in the sun (but not too much sun). It feels weird to write something brief about it, merely highlighting three games that we played, when the important part is the people, but being that this is a board gaming website, I figured ya’ll will forgive me. 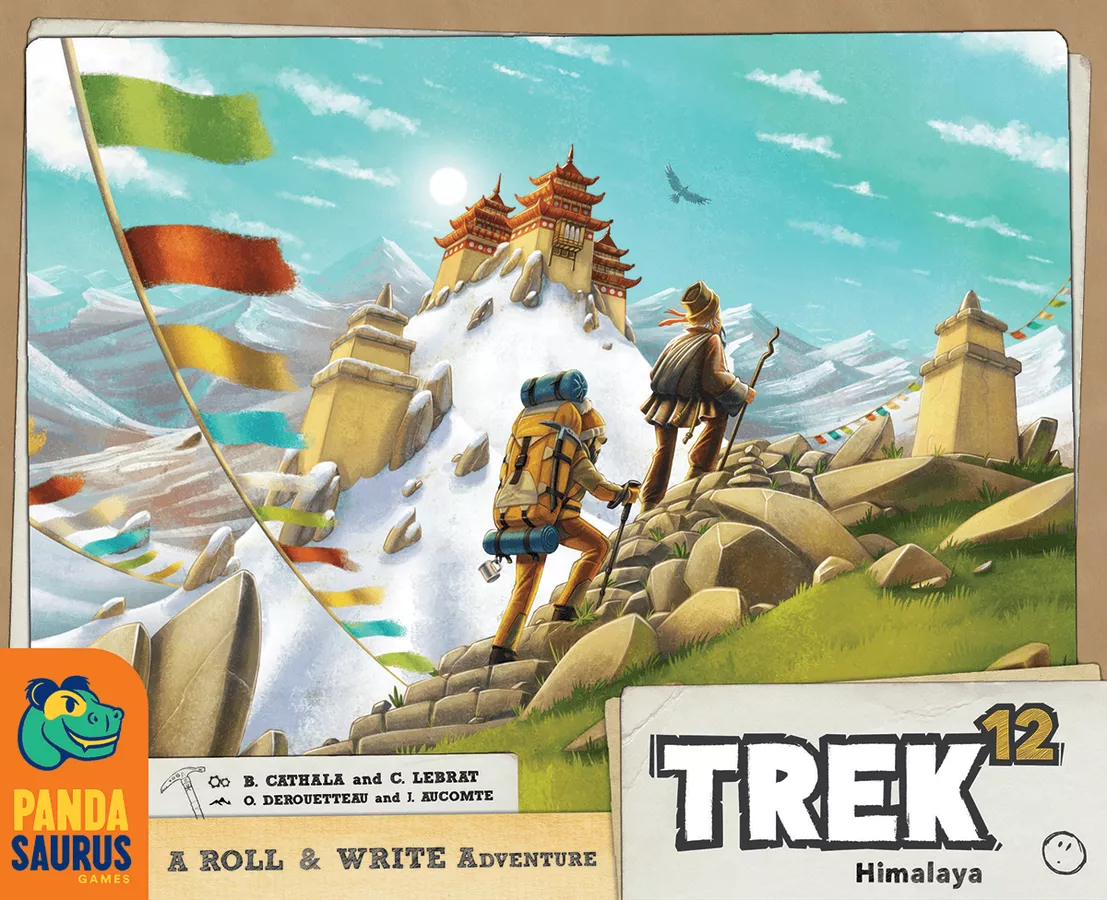 Leading off with a Roll and Write and the only game that I played this weekend that I will end up picking up. Clever game about climbing a mountain path. Two dice, one 0 to 5 the other 1 to 6. Roll the dice and then either add the two together, subtract one from the other, multiply them together, take the higher value or take the lower value and write that on your sheet which has circles for writing your numbers. You want to form a path of ascending numbers, and groups of like numbers in order to score after you have filled in all 19 circles on the mountain. The trick here is that you can only choose to use the dice manipulation options up to four times a piece. Also, if you have to write a number in a circle that does not fit as part of a path or as a group, you have to put a frowny face in its place. Same thing if you have to write a number larger than 12. These are worth negative points at the end of the game. Scoring is interesting, you score each path or group of two or more numbers, you take the highest number of the group or path and add to that one point for each subsequent member of the grouping. Paths can not intersect, so one number cannot be part of two different paths, but they can be part of groupings of like numbers. You can play these as one off plays, or there are different maps to form an expedition where you combine scores on multiple maps. This one is a clever little roll and write and another one of those that can be played by as many people as you have sheets. I do wish we would have gotten to try it with a larger group, but even in smaller player counts it was a lot of fun, even though there can be a bit of initial confusion just because it is ultimately such a different way to score things. SDJ? Who knows, I have not been following the German board game media much over the past year, but it definitely fits in what it seems as if the SdJ jury has been looking for over the past couple years. 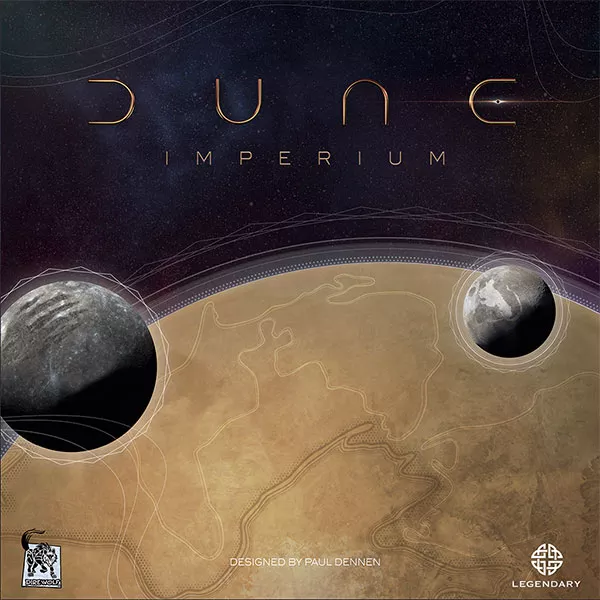 Well, this is a bit surprising. I can’t believe that no one on this site has written about Dune: Imperium yet. Also surprising was that this was played twice this weekend. I first played Dune: Imperium a little over a year ago. It hit our tables at around the same time as Lost Ruins of Arnak and I was more fond of the latter. Another play of Arnak this weekend and two plays of DI and maybe the preferences are changing? Dune: Imperium is a worker placement/deck builder set in the Dune universe. There are alliances built, alliances broken, battles lost and battles won, all in the name of racing to hit either 10 victory points (regular game) or 12 victory points (epic game). Super tight and really fun, even has a bit of that Clank! feel with the deck building. Interesting to watch different strategies unfold and we had a match with one of the leanest decks I have ever seen in play. I think they only had seven cards in their deck and a couple of draw cards that assured them that they were seeing all of their cards every turn. It’s growing on me and I may prefer it to Lost Ruins of Arnak eventually, but I think that Arnak still stands out for me because of the fun theme and it definitely plays a bit smoother and quicker than Dune Imperium, but they both are quality releases.

Designed by Tony Fanchi, but based on a design from Corey Konieczka 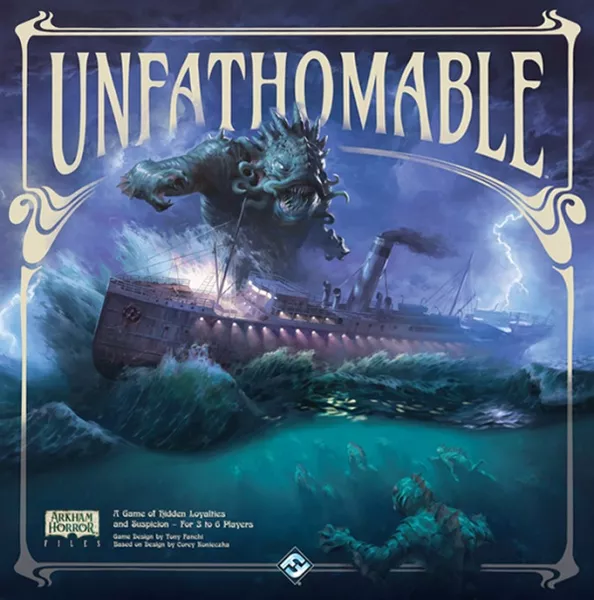 Yes, this is Battlestar Galactica set in the Lovecraft universe. Assuming Fantasy Flight lost the rights to BSG, so they went back to something they have available to them. It has been years since I last played BSG, and I don’t recall if I was all that enamored with it back then. This was the final game of the weekend and it was a good one to end on. It felt to me like they streamlined and played a lot easier than I remember in the past. Although I think the way that FFG does their rulebooks, or lack thereof of an honest to god rule book, made it a bit tougher for our teacher to teach the game. But we expect that from FFG, which is a shame. There are small differences, you are always advancing a little bit on one track after each turn which seemed to me to help the game move a bit quicker than I recall, but this is really BSG. We had a Hybrid/Cylon win. I switched over about halfway through and I was having a difficult time hiding my actions, but in the end the ship was overrun and we won. In typical FFG style, there were a couple giant miniatures along with other plastic, but a surprisingly bland art direction on everything else. Was it good? Yeah it was and it was definitely a fun play with a fun group. Is it something I’d ever seek out? Probably not. I am grateful however that I got to try it out.

Final Tally for the weekend, 20 plays of 16 games over three days. Lots of laughs, lots of food and lots of great memories made with good folks, and there just happened to be some gaming going on.

Thoughts from The Opinionated Gamers:

Mark Jackson: I’ve been meaning to write up my thoughts about Dune: Imperium… the short version is (a) a great solo game that (b) is also good as a multiplayer game…and that manages to evoke the atmosphere/theme of the novels without being off-putting to someone who (a) read them 40+ years ago and (b) isn’t really a fan.

Chris Wray:  Trek 12 might be a sleeper hit.  I talked to my local game store last week, and it has apparently been out a few months. I follow board games exceptionally closely, but to be candid, I hadn’t heard of it, despite at least one SdJ jury member saying nice things, and despite it seemingly being popular on Board Game Arena.  It’s fantastic: I can’t wait for the new Amazon-themed version to make it to the US.