Crows
Review by: Doug Garrett of Garrett’s Games and Geekiness 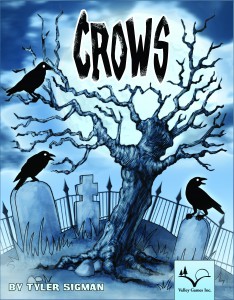 Inky black and ominous, crows populate our neighborhood and caw incessantly.  They send a shiver down your spine as they stare down malevolently from lampposts and telephone wires as you walk beneath….at least that’s what happens if you’ve watched too many Alfred Hitchcock movies.

Valley Games’ Crows, the seventh in their Modern Line, incorporates that ominous feeling in the graphics of the game.  The Crows’ box cover pictures crows in a graveyard sitting either on tombstones or in a scraggily-looking black tree with a bluish-gray background to complete the mood.  What you get in the box, though superficially tying to this atmosphere, is a tile-laying game that fits nicely into the family-friendly category, albeit with some ‘take that’ aspects. The crows in the game care more for shiny objects than making noise or searching for dinner.  In fact, tempting the wonderful crow-shaped meeples to your shiny object each round is the goal.
The game begins with an initial set up of nine randomly chosen tiles placed in a diamond-shaped grid with space between each tile. A player’s turn then consists of

The tile types consist of trees with 0-3 crows sitting in them, trinkets, cemeteries, and trash.  The trash tiles are not actually in the tile-draw pile, but instead are given to each player at the start of the game and can be placed instead of drawing a new tile.

But what’s the point you ask?  Well, that’s where the goal of attracting the crows with YOUR shiny object comes into play.  Each player has a plastic bauble in his/her color that he/she will be placing each turn in order to attract as many of the crows on the board as possible.  And how does that happen?  Well, crows -as the saying goes – like to fly straight to their goal.  In the game that translates into the crows heading for the tile with the nearest shiny object once all of the shiny objects are on the board for the round.  Crows cannot fly diagonally, however, so careful placement of both your tile and your bauble is key.

Each tile placed also has a specific function.  The tree tiles receive as many crow meeples as pictured.  The trinket tiles are extra bling that works to attract crows when two possible shiny objects are equidistant from one another.  The cemeteries are a crow’s favorite gathering place, so they earn a person double points for each crow.  Finally, trash is just too tempting to pass up for the crows, so though they may head toward your shiny object, if there’s trash in their path, they always stop there rather than moving on.

The key strategy, therefore, is to place that shiny object on a tile where you will attract the most crows, but also take into account where you are in turn order and how you can affect the number of crows other players will be able to attract.  Once everyone has placed his/her shiny object, crows flock to the tiles, with ties causing a split of groups of multiple crows.  For example, if Shelley and I each had our shiny objects 2 spaces away from a tile that had 5 crows on it, each of us would receive 2 of those crows with the fifth one remaining on its starting tile.  If that were all of the crows we had attracted to our tiles, we would each score 2 points for that round.

But how can there be 5 crows on a tile?  Good question!  You’re correct that no tree tile when first placed will have more than 3 crows on it.  However, once crows flock at the end of a round, they stay on the tile to which they have flocked until tempted away by another shiny object the next round.  But wouldn’t that lead to huge flocks of crows all congregating on just a few tiles?  Designer Tyler Sigman has thought of that situation as well, for when 6 or more crows wind up on a tile at the end of a round a ‘murder of crows’ has formed; 2 crows are removed from the group, and the rest spread out from the tile in a spiral pattern, leaving only one remaining on the original tile.  This rule helps thin out the crows and also allows a player to make sure tiles like trinkets or cemeteries have a crow on them, precluding placement on those tiles for the next round.

The final added wrinkle is the special tiles mentioned above.  If you ever place your shiny object on a tree that has no crows on its illustration, you get a special tile.  These allow you on a subsequent turn to do things like make a regular tile a cemetery for a round, stop a particular tile’s crows from flocking, prevent cemeteries from scoring double, etc.  If you do not use the tiles (and one is just worth 3 points at the end), then you get 2 points per tile.

Play until the tiles are gone, and that’s the end of the game.  It’s fairly simple, but with some nice thought involved in the placement of both the tile drawn and where that shiny object can benefit you most each round.  I have now played it 4 times with all possible player numbers and enjoy each experience, though the decisions change quite a bit when you have 4 players compared to only 2.  Turn order is key and causes some angst as you know that the best placement you can make will inevitably suffer once others steal your crows away with where they put their shiny object and what special tiles they might play against you.  I have enjoyed all of the games I have played and plan to continue to get this one off the shelf in the future.
[both images from Valley Games’ website]

Andrea “Liga” Ligabue: I was quite impressed by this simple but intriguing game. The way the flock works and moves is really nice. You have to play wise and use the turn when you are the first player at the best. I think Crows is a nice game and just the right amount of engagement compared with the duration of a single play.

I love it!
I like it…(2) Doug Garrett, Andrea Liga Ligabue
Neutral.
Not for me…

Like Loading...
This entry was posted in Reviews and tagged Crows, Tyler Sigman, Valley Games. Bookmark the permalink.