Review by Doug Garrett of Garrett’s Games and Geekiness

Firenze, or Florence to non-Italians, epitomizes the dynamism of the Renaissance.  From Michelangelo’s David, to the paintings in the Uffizi Gallery, to Brunelleschi’s dome that tops its cathedral, the city’s center seems to be the perfect setting for a game involving artisans and architects.

Andreas Steding’s latest Pegasus (Essen 2010)/Z-Man (May) release for 2-4 players takes the Italians’ moniker for Florence as its title, along with the tower pieces from Michael Schacht’s Patrician, to create a 3-D tower-building game.  Probably best known at this point for his 2009 Essen hit Hansa Teutonica, Steding has players take on the roles of rival architects – buying supplies, competing to build towers in 6 different colors, and dealing with the possible rewards and misfortunes that come with the job.

To start the game each player receives a set of seals in his/her color, a player board on which he/she will build towers, and 2-5 white tower blocks (depending on his/her place in turn order).  Along the bottom of the main game board cards fill 6 slots.  Four tower blocks randomly drawn from a bag get placed on top of each card.  Finally, four “balcony” bonus tiles are placed on the board, followed by 5 randomly placed neutral seal tiles that cover possible scoring spots.

On a player’s turn he/she will be able to perform all of the following actions:

As you can see, most of the possible actions are optional, so turns move quickly.  But what does it all mean, you ask?  Well, let’s go into a bit more detail about the above actions to explore the possibilities. 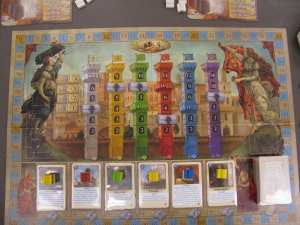 The first action on a turn, choosing which card/set of blocks to purchase, is the heart of the game.  First off, cards cost blocks from your supply.  Yes, you must spend from 0 to 5 unused blocks to purchase the card/block set you want.  Each card then has a specific action that one must perform or hold onto for later.  For example, a card could force you to destroy one of the towers you currently have under construction, or allow you to pay less for a card/block set in the future, or force an opponent to trade a block from their storage with you.  As you can see, cards can be beneficial or painful, so avoiding the painful ones may mean paying extra.  The block mix on the card may also determine the card you must have.  Since each tower you build is comprised of one color, you may feel the need to take a painful card to get that final purple block that you just have to have.

Once you have dealt with the card and taken the blocks into your supply, then you have the option of trading 3 blocks in your supply for 1 on a card that is currently available because you MUST HAVE another white block!  The three blocks are placed on the card in question, so it is possible that a particular card can have more than the standard 4 blocks on it when finally taken by a player.

Next, you can choose to build towers.  There is no limit to the number of towers you can have under construction, or how many blocks you add to a particular tower on a turn, but you MUST ADD at least one block to each tower every round or that ‘abandoned’ tower will be destroyed (see (d) above).  Oh, and building more than a couple of blocks at once costs you blocks from your supply once again.

Towers from previous rounds that did not get new blocks are then destroyed (you lose ½ rounded up of the blocks back to the draw bag), and then you have the option of fulfilling commissions.   Available commissions are denoted on the main board by color and height.  This denotation is the first quibble that I have with the game, as the big, BOLD number is your score for fulfilling the commission, while the required height number is rather small and seems shunted off to the side of the tower.  Yes, you can fairly easily count the number of levels required, but confusion has happened more than once for more than one player as he/she went to fulfill a commission and realized that they had been looking at the wrong number.

Finally, a player can hold no more than 10 unbuilt blocks and 5 cards for his/her next turn. There are cards, however, that modify these limits.

The game continues until at least one player has used up all of his/her commission-claiming seals.  This player receives a 5-point bonus, and then everyone else gets one more turn.  Final scoring then involves

1)   Scores for commissions
2)   Bonuses for building the first tower 5-8 blocks tall
3)   Bonuses for having the majority of towers in a particular color
4)   Celebration cards you purchased (some are negative, which isn’t very celebratory!)
5)   The End Game tile

So what’s the verdict?  I have to say I am quite pleased with the game.  Player interaction might seem low given my descriptions above, but actually direct conflict happens often.  The competition for tower commissions can cause much angst as cards are purchased to force trades of essential blocks that lead to destroyed towers.  Because everyone builds his/her towers in the open, you can see whom you are competing with, and can plan for possible ways to influence that competition.  And the fact that a tower has to match the height requirement – you can’t use a 6-story tower to fulfill a 5-story commission – leads to further angst.

On top of that, those card actions can be painful!  Say you’ve been building a couple of nice, tall towers and you need another couple of rounds to reach the 8-block maximum.  Unfortunately, the Luxury Tax card is revealed and one of your opponents takes it.  Now you have to pay 2 blocks from your supply for EACH tower over 5 blocks tall, but you only have one block in reserve…. Down come the towers with ½ (rounded up) going back into the bag.  OUCH!  As you can see, judging when to risk and when you must remain conservative and hold onto more blocks in supply becomes an important part of the decision-making process.

Yes, the luck of when cards come up and which cards receive which blocks can be a factor, but this luck is mitigated by the exorbitant cost of a card when it is first revealed – I should say that cards slide down the cost scale, filling in the blanks where cards are taken.  Being careful not to over-spend for a set unless necessary is essential, but being forced to take the card in the 0 spot because you have no blocks in your supply often causes pain.

Should you run out and get a copy right now?  Well, I would strongly advise that English speakers wait for the Z-Man release in a couple of months, as there is A LOT of text on the cards.  I am sure that numerous plays in a row would allow one to forego reading each card as it comes up, but I created a pasted-up version to play and we have constantly found ourselves scanning through the text as we choose our card for the round.  That said, Firenze’s beautiful board and plethora of cards combine for a satisfying 60 minutes of gaming.

Jonathan Franklin (1 play)
I have only played it once, but thought it was a wonderful gateway or stepping stone game.  It is very easy to get into and will be even more so when Z-Man republishes it with English text on the cards.  There is good variety in the cards and the game is not as dry as Patrician and Asara, two other tower-building games that come to mind.  It has a good level of interaction between players as well as an honest 1 hour playtime.  I have not yet played with the Campanile card, which adds a twist to the game.  I cannot say I love it with only one play, but I could see being a go-to game and a ‘love it’ with more plays.  Everyone is touting 7 Wonders, Cargo Noir, and Asara for the SdJ, but I think Firenze is better than those three by quite a bit even though it does not bring anything particularly novel to the gaming table.

Dale Yu (2 Plays)
I have played this one twice, and thus far, I am quite happy with this one.  I hadn’t paid much attention to it at Essen as I had run into the designer (Andreas Steding) who had told me that there was a LOT of German on the card and that I’d be better off waiting for an English version.  Of course, a German copy still managed to make its way into my house, so I went ahead and made a set of pasteups for it.

(http://www.boardgamegeek.com/filepage/62903/english-card-pasteups if you’re interested — though, honestly, at this point with a English language version coming out, you’d likely be better served waiting for that version so you don’t have to muck around with the pasteups.)

I like Firenze because of the puzzle like nature of figuring out which blocks you need and how you’re going to get them into your workspace.  The constant battle of wanting to build as many towers as possible is constrained by having to build onto each one in each turn — you really have to look a few turns ahead to build as rapidly as you’d like.  For example, it’s harder than you think to try to figure out how you’re going to get a yellow, blue, AND red piece in each of the next 3 turns!

I do like the interactive/antagonistic nature of the cards, as many of the “Euro-style” games that I often play do not have such direct conflict. However, I don’t want to scare anyone away because of it — most of the conflict is derived from the cards, and in most cases, you will have a chance to buy up any particular card as much as your opponent’s will!

There is a nice bit of a race aspect as well – since you can always see what your opponents are building.  You can foresee competition for different color blocks as well as competition for some of the special building squares that lead to bonus points.

Steding is quickly becoming one of my favorite game designers.  While certainly not every game of his is a gem, this one is amongst his best (along with Hansa Teutonica, Kogge and Macht und Ohnemacht).  There are plenty of good ideas here, and this is definitely a game that deserves more exploration that I have given it thus far.  This game is currently on my shortlist of games that I think will garner a SdJ nomination. I like it.

I love it!
I like it…(3) Doug Garrett, Jonathan Franklin, Dale Yu
Neutral.
Not for me…

This entry was posted in Reviews and tagged Firenze. Bookmark the permalink.