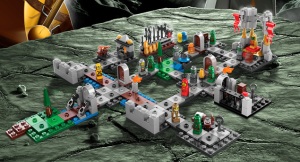 While the official release of HEROICA™from LEGO Games happened on June 1st, somehow product began appearing at some Toys’R’Us stores on Memorial Day weekend. So, thanks to the magic of the U.S. monetary system, three of the four sets ended up in the very excited hands of, well, me. (And my boys – that’s right… I bought them for the 6 year old & the 9 year old. Just keep telling yourself that, Mark.)

What follows is not really a review but a series of first impressions & thoughts… so take it with a grain of salt. 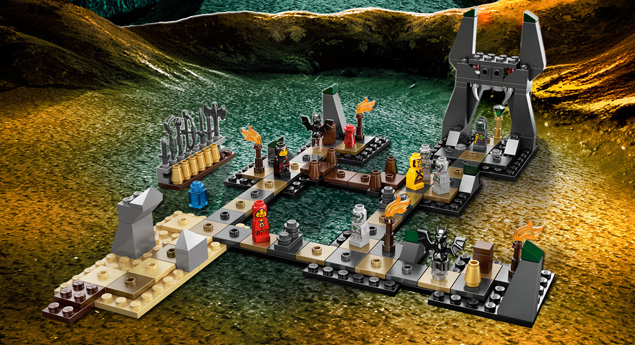 Since I have been working as a consultant for LEGO Italia with the LEGO Games series since September 2010, I wanted to add to Mark’s first impressions. Of course, I’ve been aware of HEROICA for a long time and have had the opportunity to play it a great deal.

First of all it has to be clear that the main target for HEROICA are kids age 8 to 12. Most of the “dungeon crawl” games on the market are not really suitable for kids and HEROICA fills that gap, offering a nice game experience with simple & easy rules.

Secondly, what LEGO has done with HEROICA, is actually to create a whole fantasy universe with a main plot, main characters, battles and monsters. These 4 games form a Saga… 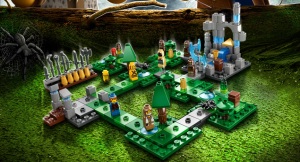 Once upon a time there was a great place named Kingdom of Ennon. The king and his knights watch it from Castle Fortaan.

The Kingdom of Ennon was protected on all fronts by natural barriers with mountains to the north and west, the open ocean to the east, and a mighty river to the south.
On a dark day the monsters arrived and invaded the Kingdom: the Goblin King settled in Castle Fortaan installing his General in the Draida Bay while the Dark Druid took over Waldurk Forest and the Golem Lord the Caverns of Nathuz.

The Barbarian and the Wizard start from the Drandora port to free the Kingdom of Ennon and recover the ancient relics. Their first battle is against the Goblin General in the Draida Bay, the only access to the Kingdom. After that the Barbarian meet the Druid and the Ranger and fight the Dark Druid in the Waldurk Forest. Together with the Wizard and the Rogue, they go deep in the Caverns of Nathuz to beat the Golem Lord and finally the Barbarian, the Druid, the Wizard and the Knight fight the Goblin’s King in Castle Fortaan.

With these 4 boxes LEGO opens the gates for a fantasy universe and starts to write the story of HEROICA. The Kingdom of Ennon is just the last Kingdom to fall and the first to be freed …

Concerning the rules: LEGO really tried to keep them much simple as possible leaving space for lots of customization. Of course, keeping the rules short and compact sometimes leaves room for some misunderstading.

I also agree that the best way to play, at least for people with a gaming background, would be with the Battle Rules where the monsters really play a big part.

What I’m sure of is that HEROICA offers a great degree of customization, starting with ability to design your own scenarios. It’s also very easy to created “advanced” rules. You can combine the boxes in the suggested manner or simply create your own new story.

follower of Jesus, husband, father, pastor, boardgamer, writer, Legomaniac, Disneyphile, voted most likely to have the same Christmas wish list at age 44 as he did at age 14
View all posts by Mark "Fluff Daddy" Jackson →
This entry was posted in First Impressions and tagged Lego Games. Bookmark the permalink.

9 Responses to First Impressions: HEROICA – LEGO does a Dungeon Crawl