Kid Games: A Quartet of Mini-Reviews

The first time I played Zooloretto (the original game that won the Spiel des Jahres), I was underwhelmed. It was nice to look at, it worked just fine… but somehow it just didn’t grab me.

But I was willing to try a second play – and that was enough to get me to buy a copy… and then track down the multiple little expansions. And then Michael Schacht got serious about expanding the game: XXL, Exotic, Boss & the sequel/sister game, Aquaretto.

For the record, I’m a huge fan now – esp. when using Exotic & Boss together. (If you’d like to know more about my opinions of the plethora of expansions, check out my blog post Renovating Your Zoo(loretto).)

I managed to get Zooloretto Mini from my gamer ‘brother from another mother’ (Mark Johnson of the Boardgames to Go podcast)… primarily because I thought that having the new animals would be kind of cool. (And, yes, there was a bit of the whole “I want to own everything Zooloretto-ish/I’m a collector” bug involved.)

Surprisingly, there’s more… well, less AND more in the box. By stripping out the money element of the game, the designer (Michael Schacht) has managed to make a version of Zooloretto that plays quickly and is simple enough for my six-year old son to enjoy. Yet there are enough interesting decisions to make it an involving 30 minute filler for gamers. 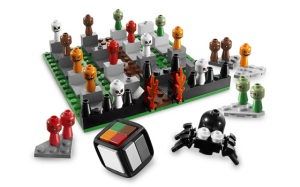 The Lego Games series debuted to much anticipation… and then an equal amount of groaning & complaining from gamers who were miffed that Lego, a toy company, wasn’t making games for adults. Seriously, I mean, who do they think their target market is? Adults males who spend 5+ hours a week on BGG, right?

Well, no. It’s kids – and by that measure, Monster 4 (which is a dice-y variant on tic-tac-toe) is a success. Players have a set of four monster pawns which they place on a 4×4 grid of “graves”. The die roll tells you where you can place your pawns… or if you get to add a skeleton (wild pawn) to the board… or if you can send the giant spider to clear off a section of the graveyard. The first to get four in a row wins.

The game is quick – quick enough that we typically play 3-4 rounds in about 15 minutes. It’s not going to set the gaming world on fire, but both my boys (10 & 6) enjoy the theme, the cool Lego pieces and the speed at which it plays.

Note: like I’ve said before, the Lego Games series has one major same feature and/or bug (depends on how you look at it): by leaving wide creative space for players to customize & change the games, they’ve left pretty big holes in the rule sets. For their intended audience, I think this is actually a good idea – but it’s pretty much guaranteed to make adult gamers a little nutso.

What can you say about the Bunnies that hasn’t already been said? It’s Gamer Uno… and that’s damning Uno with faint praise.

Kinder Bunnies: Their First Adventure is less violent & less complicated… but with no more game than the original Killer Bunnies. It’s still too easy to get shut out of the game because you’ve been shut out of bunnies (which power all of the “good” cards in the deck). The game still ends with a lottery – if you have the one magic carrot, it doesn’t matter how the rest of the game went. It’s an exercise in futility for any adult with a half a brain. OK, I exaggerate – a quarter of a brain would suffice.

At the same time, my six-year old son (who is reading pretty well) absolutely adores the game – and not just for playing by the rules. He arranges & rearranges the cards, inventing his own (very possibly better) games with the components.

I can not recommend the game – it’s a chaotic mess of a “take that” card game that nearly drove my wife to throw the cards across the table during her one play. But that doesn’t mean your kid will agree with me.

The Magic Labyrinth won the Kinderspiel des Jahres (Childrens Game of the Year) in 2009 – and it deserved it. It’s the first truly functional hidden labyrinth game (yes, I know & love Magical Maze/Goblin’s Gold, but it has some problems as a game) that works for 2-4 players. The design rewards players who pay attention not only to their own moves but also the moves of others as they create a mental map of the hidden walls.

Obviously, a review of the expansion is aimed at those folks who already own the game – so, what does this long thin box contain?

We’ve found that all of the elements in the expansion make the original game even more enjoyable without drastically changing the game. My one worry is the long-term viability of the “magic walls” (the design looks a little flimsy) but so far they’ve done just fine.

Sadly, while the original game is now easily available in the U.S., the expansion is (so far) more difficult to track down. I got my copy from amazon.de.

Opinions from Other Opinionated Gamers
Doug Garrett:  I can only comment on the first of these, and I was pleased enough to obtain a copy of Zooloretto Mini.  Really all it does is make Coloretto – the game all of the line is based upon – more thematic with tiles instead of cards.  I can see that it will work very well with kids, and plan to pull it off the shelf to enjoy with the nephews in the future.

Andrea “Liga” Ligabue: I’m used to play a lot of games with kids, both at home (with my 4 year old son and 10 year old daughter) and at school (I have a games lab at primary school). I like Zooloretto Mini (I’m a great fan of Zooloretto) and I think it could work well deserve for people not used to playing games.

Monster 4 is also a nice game. I have a lot of success using LEGO Games at school with kids (6-10 yrs) who are not used to playing games. They are really a good entry point to boardgaming. Monster 4 is one of the best in the first series. (Of course I’m not really in a position to give an impartial rating since I’m a consultant with LEGO Italia for LEGO Games since September 2010.)

Zooloretto Mini:
I love it!…
I like it…  Mark Jackson, Doug Garrett, Andrea “Liga” Ligabue
Neutral…
Not for me…

Monster 4:
I love it!…
I like it…  Andrea “Liga” Ligabue
Neutral… Mark Jackson
Not for me…

Kinder Bunnies: Their First Adventure:
I love it!…
I like it…
Neutral…
Not for me… Mark Jackson

The Magic Labyrinth: Expansion:
I love it!… Mark Jackson
I like it…
Neutral…
Not for me…

Why are some users anonymous? Learn more
7 Day Activity

fluffdaddy
Your @reply will add people to this post and send an email.
Comment
Cancel
Document stats ↓

follower of Jesus, husband, father, pastor, boardgamer, writer, Legomaniac, Disneyphile, voted most likely to have the same Christmas wish list at age 44 as he did at age 14
View all posts by Mark "Fluff Daddy" Jackson →
This entry was posted in Reviews. Bookmark the permalink.