Perfect Stride
By Kay Darby and Jeff Timothy
Illustrations: Tara “TK” Labus
Funleague, 2010
2-4 players
30 – 45 minutes
This game is a steal for $10 at www.perfectstride.net.
It is only available there until August 25th. 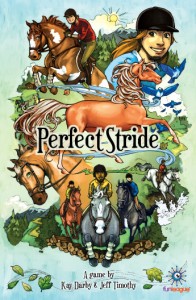 Looking for something meatier than Mille Bornes or Gamewright’s Horse Show?  Looking for something lighter than Dominion or 7 Wonders?  Perfect Stride is an excellent family game – enough luck that anyone could win, but enough skill that the better players will win more often.  Both my family and my gamer friends said they would be happy playing it again, so it appeals to a wide range of players.

Perfect Stride is a horse racing game through the woods.  You encounter and try to jump over ten face-down jumps with names like Forgotten Haywagon and Mud-pie Meadow.  The art is classic family friendly teen/pre-teen horse drawings, with enough charm to avoid being saccharine.  The meat of the game is a solid American/Euro-hybrid with lucky and unlucky events set within a hand management context that forces hard decisions.

After an easy setup of choosing a horse with a small special ability, four preset pace cards, and three random skill cards, you are off and running.  Everyone starts with four pace cards (Gallop, Canter, Trot, and Walk).  Gallop is fastest, but you get no additional skill cards that will help you clear the jumps.  Canter earns you 1 skill card and trot earns you two.  Walk is slowest, but you get three additional skill cards.  Each player selects one of their four pace cards and they are simultaneously revealed.

The pace cards set the sequence the horses will approach the first jump.  The fastest player gets the lead player token. After drawing 0 to 3 cards, you may attach one horse care card to your horse.  These are found in the skill deck and can help you out of a jam when your other skill cards are not enough to help you clear a jump.

After playing the pace card, drawing additional skill cards, and attaching a horse care card, the jump starts.  The jump is revealed.  It can be one of four types of jump, which matches the four skills the horses have.  If the jump type matches the horse type, the difficulty of the jump is decreased by 1.  For example, River Rapids is a three star speed jump.  If Legend, your horse, has speed as his strength, it becomes a two star (difficulty jump).  Jumps range in difficultly from three to six stars.

Before you attempt a jump, each player draws an event card.  Events can help or hurt you, making the jump easier or harder.  In addition, events can throw twists for subsequent riders, such as permitting that rider to change the order of the next three cards or shuffle and redistribute all the pace cards.  These events can throw a real wrench into your plans.  There are also group events, which affect you and all subsequent riders on that jump.  This is a nice feature because group events are generally bad, so you have incentive to pick a faster pace card at the start of the turn to avoid getting stuck with a bad group event which makes the jump harder.  To complete the jump, you must play skill cards that have enough horseshoes to overcome the difficulty of the jump.  For example, if you have a jump of difficulty 5 and an event card that adds 2 more difficulty, the jump is now 7 difficulty.  You can use a combination of four things to overcome the jump.  Your horse’s special ability, your attached horse care card, the horseshoes in the upper right hand corner of your skill cards, and one special ability.

Let’s say it is an agility jump and you have a horse that specializes in agility.  That makes it a 6 difficulty, rather than 7.  If your horse care card adds two horseshoes, it is now a 4 difficulty jump.  If you have two skill cards with two horseshoes on each, you can play them to clear the jump and claim the points for the jump.  Skill cards range from 1 to 3 horseshoes, with one 5 horseshoe card, Perfect Stride.  With three players, the first player to clear the jump gets 3 points, second player gets two, and last one gets one point.  In addition, the player who has the lead rider token at the end of the round gains an extra point.

Along with horseshoes, skill cards also have special abilities that can be used, depending on the jump type.  For example, instead of spending two skill cards with two horseshoes each, I could spend one skill card if it has two horseshoes and a special ability of +2 horseshoes for agility jumps, thereby saving a skill card for subsequent jumps.  There is a hand maximum of five skill cards at the end of your turn.  The used pace card is passed to the left.  This means that there are times when you will want to walk or gallop and not have the right card to do it, so plan out your pace cards a bit.

The jumps vary in difficulty and type, but after you get one jump down, you will understand the game and cruise through the rest of the game.  Add up all the point gained.  The player with the most points wins.  This is not a complete rehash of the rules, which cover ten pages.  The rules are very well written and extremely clear, with examples.  The website is even better, including video walkthroughs, rules, FAQs, etc.

You may only use one skill card special power per turn and it must be the same type as the jump type.

All skill cards must be played at once.  You may not play a skill card with a special power to take a card from someone and then use that card on that jump.

Sometimes it is worth skipping a jump that will get you one point so you can go faster into the next jump and get three or four points there.

Sometimes other riders will get great luck and you will get stuck with a lost stirrup.  Take the game for what it is.

Some cards let people be ‘mean’ to each other in a very gentle way.  Don’t expect it to be a whine-free game if you have players with that predisposition.

This game was far better than I expected it to be when I traded for it.  It has skill, choices, and a family-friendly theme.  It feels well playtested and solid as a game.  About the only gripe we had is that we wished the horses had more special abilities and characteristics than just +1 in one of the four jump types.

This game is a steal for $10 at http://www.perfectstride.net!

Nathan Beeler (1 Play): I did not expect to like this game.  In fact, I expected to hate it: a cutesy card game about horses primly pouncing about the countryside.  Yuck!  But it looked short and simple and could help burn a game off of Jonathan’s “to play” list.  So I agreed to suffer through it.  The first indication that I was wrong came when we had to choose our horses.  I am a sucker for variable player powers, and even though the horses’ powers aren’t terribly different (see above), it was a good sign to me.  Starting play, there were some questions about how the rules worked: could you activate all the cards you played or just one, could you use a card for its horseshoes AND its special powers, did you also draw an event card if you were subject to a group event, what was the point of the grooming cards anyway?  We figured these things out, and found out we’d missed the rule about special powers needing to match the obstacle type to be activateable.  Pretty clearly this was not just a teen girls and their horses way to while away the hours of summer vacation.  There was something going on.  About halfway through we’d figured everything out and were dashing smoothly about the tree lined paths when the question went up, “We’ve got the idea, do we want to finish?”  Surprisingly, we all did.  I adjusted my jodhpurs and got back in the well fitted saddle of my mighty steed.  I was a convert!