Posted on October 1, 2011 by nathanbeeler

“Welcome to my secret lair on Skullcrusher Mountain.”
The reports of Donald X. Vaccarino’s non-existance were an exaggeration, it turns out.  We were not, as some suspected, Tummelhofered by another psuedonymous designer front man.  Mr. Vaccarino is real.  Indeed, he is so real the gaming world will soon be drowning in a sea of new titles from the man whose fiendish brain brought us all under his Dominion these past few years.  Like sharks with laser beams on their heads, his new games are the tools of a man, nay – an evil super genius, bent on building his game design kingdom on the broken backs of a ludophilic populace.  This Spiel at Essen, the plans he has been hatching from his island volcano lair will finally come to fruition. Donald X. Vaccarino doesn’t expect you to play, he expects you to die.

Or more likely he’s just a nice guy with some fun game ideas that are about to hit the market.  After playing a prototype version of one his latest games, Nefarious, I’ve found it surprisingly easy to envision a world where everyone is an evil scientist with designs on world dominance.  In fact, everyone in the game is a mad scientist, and nothing short of world control will sate them.  All it takes to reach this destiny is a mere twenty points worth of diabolical inventions.  But as we all know from experience, spirit crushing inventions don’t come easy, and they certainly aren’t cheap.  Minions are always wandering off, and the competition keeps interfering with the best laid plans.  Ideas are lost, and sometimes they find a way of backfiring.  In short, it’s no mean feat being good at being bad. 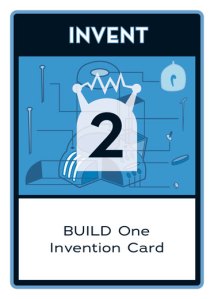 “The doomsday machine is terrifying and simple to understand.”
The genius of Nefarious is not a scientist, it’s the game itself, which manages to pack in a lot of fun while staying fairly short and easy to grok.  Each round consists of four steps: choose an action, collect money from your minions, resolve actions, and check to see if someone has won.  Seriously.  Checking to see if someone has won is one of the four steps.  This is not rocket science, folks.

Actions are chosen simultaneously face down and then revealed.  And while the actions can affect other players, there isn’t the level of player interaction in this part of the game that exists in something like Race for the Galaxy and its similar role selection phase.  The four actions you can choose from are speculate (put one of your limited number of wonderful looking minion meeples to work for you passively earning money), invent (pay money to build an invention card from your hand), research (earn some bags of money and draw invention cards into your hand), and work (earn more bags of money).  As you can see, money is the grease that keeps the wheels of invention turning. 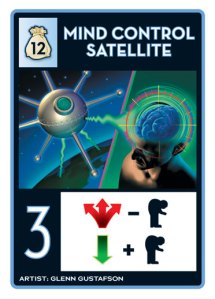 “For what we are about to see next, we must enter quietly into the realm of genius.”
Often players have a most pressing need, be it cards or money or the need to get an invention down, so the choosing of actions can be fairly straightforward.  The meat of the game, the real fun of it, lies in choosing and playing the inventions themselves.  Each one has a cost in bags of money and an amount in victory points earned toward the end of the game.  Most of them also have side effects which can affect you and/or the other players.  Some inventions may actually hurt you when you build them, but they tend to give you more points for the money or actions it took to build them.  The inventions that hurt others thankfully hurt all other players equally.  I applaud that decision, as games that require you to choose which opponent to go after are just not my cup of poison.

The way multiple invention effects are handled is fairly clever and worth a bit of comment.  Normally this would require having some kind of rotating start player token, where effects were executed collectively starting from that point.  Nefarious handles this by having a player look at what her own invention does to her first, if she built one that turn.  Then she looks at her left hand neighbor, and so on clockwise around the table.  The result of this is that two people who are being affected by others’ inventions may have slightly different outcomes.  I could draw an invention card first because of my left hand neighbor’s Space Elevator, and then discard one because of my right hand neighbor’s Deadly Static Shocker.  The person sitting opposite me would therefore lose one card first before drawing a replacement, which would be more painful if they didn’t already have a card they wanted to give up.  Or it could be a boon if they had no cards and thus weren’t subject to losing one in the first place.  In the end, all effects that can be applied will be applied, but the order they happen in keeps things interesting.

After inventions are built and their effects resolved, the cards go directly to a player’s score pile.  Effects are not long lasting, at least in the base game (I’m assuming Nefarious will spawn expansions), and inventions, once built, are safe for the rest of the game.  This last bit is critical, because it does lend a bit of stability to what can be fairly fluid proceedings.  Minions and money and invention cards will come and go easily, but points banked don’t need to be worried about.  And if at the end of a round any one scientist has over twenty point in crazy inventions, and she has more than any other scientist, the world and the game are hers. 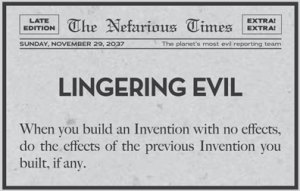 “I’ll give ’em weird.  They don’t know what weird is until they meet me.”
All this is well and good, but what aspiring young henchmen most likely want to know is, is Nefarious fun?  Is there a reason to play once you’ve puzzled through the fairly simple mechanisms and have gotten to know the inventions well enough for them to lose their charm?  Well, Donald X. Vaccarino didn’t get his doctorate in villainous game design for nothing; he’s always thinking one step ahead of you.  The game comes with 36 twist cards, each of which offers little tweaks to the rules that make the game feel a bit different each time.  Two of them come into play at the beginning and govern the changes that will make that particular instance of play unique.  There are twists that are large and there are twists that are trivial, but with any two twists in concert the game should feel pretty different every time, or at least for the roughly six hundred possible twist combinations (I think that’s right – I barely passed evil statistics, myself).

For example, the Unions twist card says you must deactivate a deployed minion each time you build an invention.  Having that in play would make the speculate action more important, as well as making money tighter due to fewer minions in play.  It would probably also push the game toward the higher point value but more expensive inventions.  But if the Quantum Relativity twist was also in play, that would mean the effects of inventions were triggered twice, which could make the bigger inventions with painful effects less desirable.  Part of the fun is creating an evil plan to deal with the twists and then trying to follow through on it.  You should never be able to get too comfortable with your strategies. 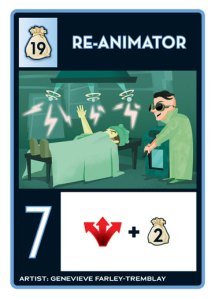 “The world is a mess, and I just need to rule it.”
There’s a well known phenomenon in writing that has an author’s villains usually being much more interesting and charismatic characters than his heroes.  Good guys are generally fuddy duddies, while baddies are more free, less predictable, and often more complicated.  Likewise, in gaming it is often quite fun to step into a villain’s comfortable loafers and skulk about without having to worry about guilt and morals and all that messy real world stuff.  Dungeon Lords, Guillotine, Merchants & Marauders, Ca$h n Gun$, Trüffel-Schnüffel, Witch’s Brew: all let you experience a bit of vicarious depravity in a lighthearted and silly way.  So it is with Nefarious, which allows you the fun of building ray guns to blind or shrink your enemies, or a weapon you can threaten to melt the polar ice caps with if you are not paid the standard million dollar ransom.

Therein lies the only real downside to the game that I have seen so far; invention effects are fairly limited and then they go away.  Minions and money and invention cards move about a little, and then the effects are done for the rest of the game.  There are no lasting repercussions to allow you to really feel like you have created a half-pony half-monkey monster that is swinging and clopping around your lair wreaking havoc.  It’s a minor complaint, because the trade off is a game that is easy to learn and teach and has a relatively short playing time.  Still, I’m hopeful for an expansion that explores inventions with game-long effects.  I want to be able to stay invisible, damn it.

“It’s not easy having a good time.  Even smiling makes my face ache!”
All told, my initial impression of Nefarious is that it is a great game with a wonderful theme.  The simultaneous play keeps the game clipping, and the ease of entry means it’s one I can play with gamers and non-gamers alike.  It has a real chance to become one of my favorites, if the twists can in fact keep the game fresh for the long haul.  Only time will tell, of course, assuming we have any time remaining for such frivolity; the terrible reign of Donald X. Vaccarino is about to begin.

Nathan has decided never to grow up.
View all posts by nathanbeeler →
This entry was posted in Essen 2011, First Impressions, Reviews. Bookmark the permalink.