OK, this will be a longer preview piece as there are a lot of games here that I’m interested in… And there aren’t many more days before I leave for Europe!  So, I’m squeezing a lot into this game preview as it will be one of the final ones prior to SPIEL.  (Though, there are still a few more game-based preview pieces coming including New Era and Vintage).  For a list of all of the previous Essen Preview pieces, click here.

As you probably know, I’m a big fan of Japon Brand – which is just a name for the collective of independent game designs that come over from Japan each year to Essen. The game lineup each year changes based on what new independent games have come out of Japan (and who is willing to come to Germany!).

However, one thing that is certain (for me at least) is that the games on offer at the Japon Brand booth will be interesting and really hard to get otherwise. This year, there are a number of games that have caught my eye – mostly from the multitude of deckbuilders from Arclight… 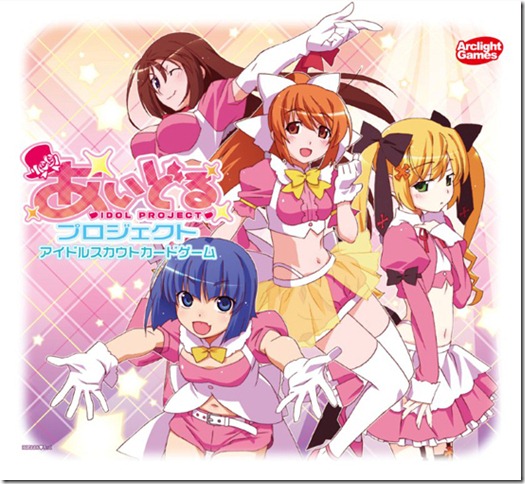 In a mysterious world of swords and sorcery, you are the chief (or the nurse) of a temple hospital. Around the world, heroes entered dangerous dungeons in search of fame and fortune. Your job is to nurse and make better all of these heroes from injuries, sickness, and curses of underworld. But watch out! Rival hospitals are waiting for the chance to get in your way. Will you manage to earn the world’s respect as a master doctor? Or will you end up as an infamous “dynamite nurse”?” 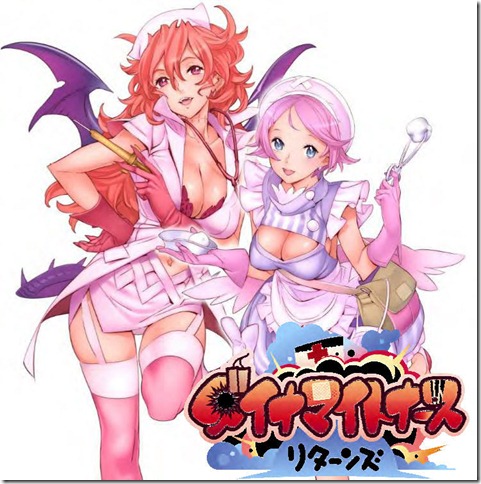 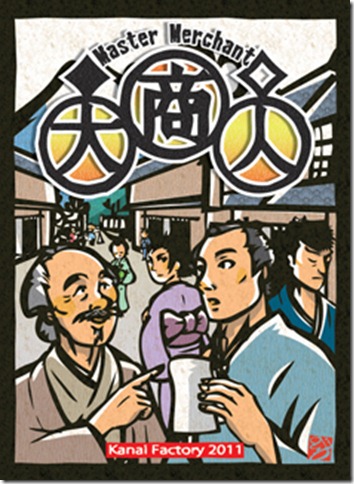 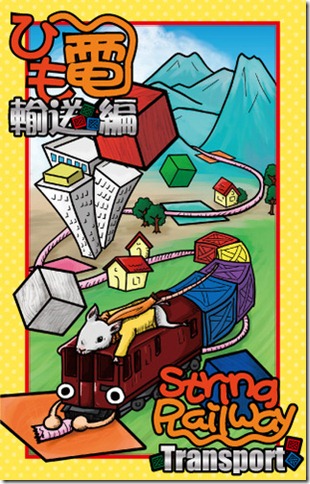 For the full list of Japon Brand games and asking prices, click here.  If you are interested in pre-orders, send e-mail with title “Reservation” to japonbrand@gamers-jp.com. And please write when will you come to the booth.

This company first pinged my radar last year with the announcement of Cité, a game of city building – this looks to be a resource management game with a bit of negotation thrown in.  However, the company will be coming with more than one game!  I have been looking forward to this one for over a year – I was hoping to bring one back from Essen last year, but it wasn’t quite ready at that time… 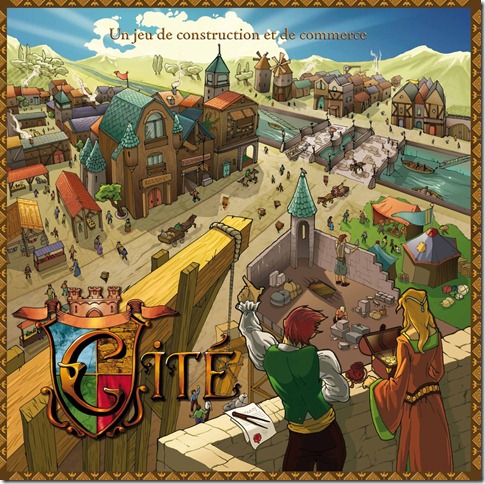 Other games in their lineup for 2011:

Sandwich is a  funny, ‘beer&pretzels’ game that you want to prepare the best sandwiches possible – well, the least disgusting ones anyway – with the ingredients you collect.  Points are scored based on how tasty (or not) your opponents think your sandwich creations are.

L’Aventure C’Est Dur is also a new game. It is a very light card game in the spirit of Munchkin mixed with 1000 Bornes.

And finally, Déluges is a civilization game, a parable of global warming.  The goal of this game is to develop your civilization before it is swallowed by the waves. To develop your civilization, you must distribute, collect and share resources with other players. But if the players overexploit the resources and develop too quickly, they impoverish the land, the water will rise and the play area will get smaller. Additionally you can take the competing populations and force them to work as slaves, but you must also work to keep your population from turning into fanatics or becoming enslaved. The players earn points for both how developed their civilization is and how sustainable it is.

The other interesting note from the Le Joueur press release is that it will be part of a booth shared by multiple independent French publishers: “Booth 5-59 will be the booth of the young&independent French publishers. Le Joueur will be there with the magazine Plato, with SitDown, with Ludonautes, Rallyman and Ludocom”.  I will be spending a fair amount of time at this booth as I’m interested in Cité (Le Joueur), Shitenno (Ludonaute), Wiraqocha (SitDown) and Rallyman: Dirt (Rallyman).

HUCH! & friends has just published its lineup for this year as well, and a few of the titles caught my attention.  First, there are a number of puzzle-style games which I have always liked – the sort of game/activity where you try to solve puzzles with the pieces given you.  Marble Monster is one of those games: “Monsters are a 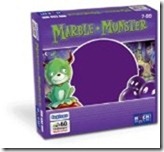 strange breed. Searching for his beloved marble, the Marble Monster wanders around, always pushing exactly one marble in front of him wherever he goes. Find the right path and roll the marble into the monster’s cave in 60 different exciting challenges.”  The other similar titles are Archelino (fitting animals onto Noah’s Ark), Tricky Tower (constructing towers with colored pieces) and Galaxia (traveling through the solar system visiting the planets in the right order).

The game they are featuring is an automobile trivia game, Welt des Automobils.  It is a trivia game filled with six hundred questions, all about cars, models, makes, car slogans and technology. Fans of classic and antique cars, but also aficionados of cars in general will appreciate this game.  Of course, it is likely limited to those who can read German as the questions will only be in Deutsch.

Finally, there is an abstract game which will hopefully be ready for SPIEL – Talat which is designed by Bruce Whitehill.  This game was previously produceed as Drei, which was a three-players only game.  This new version allows for 2 or 3 players to play.  Talat is an abstract strategy game that is played on two boards (with two players) or three boards (with three players). Each player is playing on two boards at the same time.  The goal is to capture the pieces of the opponent, and to move your own pieces to the opponent’s starting row. However, each turn, you may only make one move, so if you play on one board, you cannot move on the other. 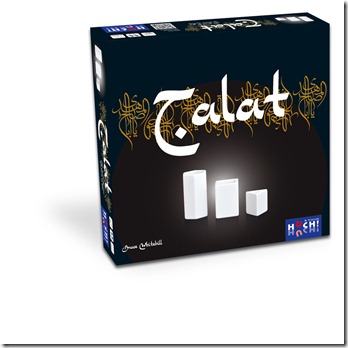 Well, this is definitely on the try before you buy list – Wilderness from FryxGames, a new company from Sweden.

From the back of the box:
“You have been assaulted, robbed and left to your fate with not enough clothes or equipment to manage. Now it’s up to you to fight against thirst, hunger, exhaustion, bad weather, sickness and wild animals. Get out of the wilderness, alive!!!”

In wilderness, 2 to 8 players race it to the nearest civilized village. But the village is not near, and the way there is not paved. As stated, you will have to find water, hunt for food, avoid wolves, bears and snakes, endure sicknesses and keep your strength up to be able to get there.

Each player’s health is kept track of with 3 parameters: thirst, hunger and strength. Every turn you get more thirsty and hungry and fatigued. The thirstier and hungrier you are, the more tired you become, and that determines how many action point you have each turn. If the strength hits the bottom, you die. The action points are used to walk, but also to hunt or rest. To regain your strength you also have to sleep. One of the biggest risks is encountering a predator since they attack you with two dice and you defend with only one and lose strength equal to the difference. And they can scent you from a mile away…
The game board is discovered gradually as players progress across it, and there are 6 turns each day (4 day turns, 2 night turns). Each day has different special rules and each board segment has its own challenges. Each board segment has 21 hexes in a big triangle and each hex has a terain type like mountain, woods, swamps and so on, and the segment may also include a predator lair. Different terrain types have their benefits and challenges. The combination and orientation of different board segments make the way forward uncertain and new every game. To top it off, the players have a limited supply of cards that can be played to help yourself or twart your opponent in certain situations. 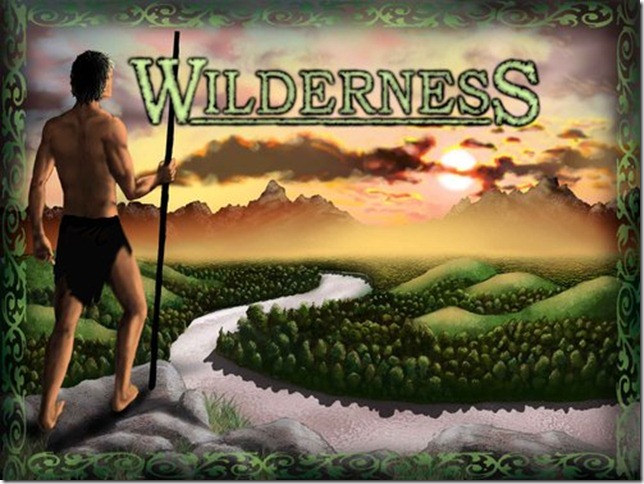 According to the designer who posted on BGG: “This game is hand-made at this stage, with beautifully carved and painted models. There will only be a few copies at Essen, and they will be in english. But, since each copy is made individually at the moment, I guess it would not be impossible to make a copy in german, if that is desired and ordered.   The hand-made version will cost officially 190 euros at Essen(hopefully it will be a little bit less) and will include 13 different sculpted and painted models, 8 board segments, lots of cards and many other things, all gorgeous and well done.”

Yikes!  The game sounds really interesting, but the cost will probably keep most people away.  This looks to be the 2011 version of the cricket game from last year…

This is a company that I hadn’t heard of before, and they are bringing Berserk: TCG to SPIEL which has apparently been quite successful in Russia.  From their press release:

Berserk is a game of classical fantasy, which was invented in 1995 and published in Russia in 2003. Since then it has become the most popular collectible card game in Russia, Ukraine, and Belarus. In the 8 years of its existence 16 different expansions of the game were published. Today there are over 4000 different cards, featuring unique illustrations created for Berserk by various artists throughout the world.

For the English edition of the game, which will be presented at Essen 2011, we have decided to turn away from the concept of a collectible card game. Berserk will be published as a “Living Card Game”, whereby you can purchase all cards of a particular expansion at once.

Here are a few important facts about the Berserk:
1. Two different ready-to-play decks will be presented at Essen.
2. Presentation of Berserk will transpire throughout the Essen fair at the Hobby World Stand 6-519.

So, I don’t know much else about the game now other than it’s 15 years old, apparently successful in Russia.  There are over 3,000 different cards now in the Russian version, so it seems to have some legs… I’m going to try to get a copy of this to try it out. Maybe it’s the next Magic: The Gathering?  On the bright side, it appears that it will not be collectible, which is a relief to me!

One other company which will be presenting new games from Russia is Rightgames.  I have had the opportunity to preview a few of the games which they will be presenting, and I will write them up later this week.  The three games I have had a chance to play are: The Enigma of Leonardo,  Evolution: The Origin of Species, and Potion Making: Practice.

Dale Yu is the Editor of the Opinionated Gamers. He can occasionally be found working as a volunteer administrator for BoardGameGeek, and he previously wrote for BoardGame News.
View all posts by Dale Yu →
This entry was posted in Convention Report, Essen 2011. Bookmark the permalink.