[To continue the Ignacy Trzewiczek day – as Liga has just published his interview with Ignacy earlier this morning – let me talk a bit about the new game, The New Era, which will debut at SPIEL 2011!]

My local game group was given the opportunity to play an advance copy of New Era, the standalone expansion to 51st State.  I’ll be honest with you, when I first got the offer, I wasn’t sure what to think of it – I was honestly fairly neutral about 51st State.  I loved the ideas / mechanics behind the original game, but it fell a little flat in my group as we felt it was mostly group solitaire.  Other than two or three cards – which weren’t even guaranteed to come into play – there was no way to interact with the cards of the other players’ areas.  Yes, there was some indirect interaction though the card drafting at the start of each round – but that was about it…

After discussing the game a bit via email with the designer, Ignacy Trzewiczek, I was assured that this new version would alleviate a lot of my concerns with the original design.  The whole premise behind New Era was an increase in interaction between the players – and this interaction could be both cooperative as well as antagonistic.  Seeing as I loved the idea and theme behind the original, I told Ignacy that I’d give the game a try, and having played it a few times now, I’m glad that I did!

Before I get into the details about the game, let me say first that New Era is called a “standalone expansion” to 51st State because it is comprised of cards that can be played with those from the original game but also can be played on its own.  The majority of the rules are the same as 51st State though there is one significant additional rule/concept introduced in New Era – there is significant interaction between the players now.  You can now use a location card that has been incorporated by another player into his area!  (More on this later).

I was going to pull out my review of 51st State that I had written for Boardgamenews – but this seems to have been lost in one of the many transitions between servers in 2011.  Rather than re-invent the wheel, I have asked and received permission to link to a review of 51st State from a good friend of mine, Frank Kulkmann.  Frank’s review is concise, well-written – which is to be expected as Frank called 51st State his “Hit of the Show” after SPIEL 2010!  If you are unfamiliar with the base game 51st State, please click on this link to read Frank’s review.  It will quickly get you up to speed on the rules and mechanics that are found in both 51st State as well as New Era.

OK, so now that you’re up to date on 51st State, let me go over the new additions to the game in The New Era.  First, as you can see above, there is a new faction included in the game – The Hegemony.  Their strength seems to come in their flexibility.  They can use all of the basic resources for something and they grant you a “wild” 1 distance token each turn.  The other four factions from the original game are still found here, and they appear to be unchanged.  There are also a handful of faction tokens (for all 5 factions) which will be used as identifying markers throughout the game now.

As far as gameplay goes, the general structure of each round remains the same:

The interactions with cards remain unchanged from 51st State – you can:

The additional interactions available in the New Era involve cards which have already been incoporated into an opponent’s play area.  There is a new icon found on the New Era cards which is the “interaction distance symbol”.  In the image below, you can see the interaction icon as the blue/red arrow found just under the right edge of the card title. 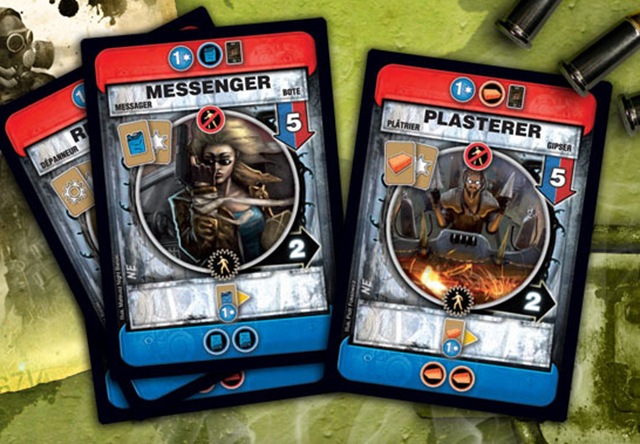 You can cooperate with an opponent’s card – when you do this, you must spend blue tokens equal to the number in the interaction icon, and then place one of your faction markers and place it in the blue area of the card that you are cooperating with.  You immediately take the resources pictured in that blue area, and then you again receive those resources in the production phase of following rounds (as long as the marker remains there and the card hasn’t been destroyed or removed).  You may only cooperate with three opponent’s cards at a time – though you can voluntarily break the cooperation at any time.  One important restriction is that you cannot start or end cooperation with an opponent’s card if that player has already passed this turn.

You could also choose to conquer an opponent’s card – if this happens, you will look resources from the card, though your opponent will also be able to scavenge a few things from the card before it is flipped over – to represent the burning ruins of the location.  The attacker will use his red tokens, and must exceed the number in the interaction icon in order to successfully conquer the card.  There is a bit of defense that can be done – there are some defense markers – red markers with negative numbers – which the defender can employ to reduce the overall strength of the attack.  If these are played, the attacker still has the chance to play more red tokens though to still be successful.

If the attack is successful, a number of things happen.  First, the attack gets his spoils – he gets all the things in the red area of the card instantly.  The defender, though, also gets some compensation – he immediately gets any things listed in the blue area of that card.  Finally, the card is then turned over and left facedown to represent the ruins of the area.  Any opponent faction markers that had been on the card are removed and returned to their original owners.

The ruins can be Reconstructed in a later action – to do this, the player must spend one Building Material and he scores one VP and then is allowed to place any card in place of the Ruins card – The distance and type of card played doesn’t matter.

So – how does this jive with the original game?  Well, the rules used to determine the number in the Interaction Icon can be applied to cards from 51st State as well:

So – there’s this one big change.  Otherwise, the rules to the game are pretty much the same, with one other exception.  The game end is now triggered at 33VP instead of 30VP.

I’ve played New Era, and I must say that it’s a much improved experience than 51st State.  The fact that you can target the cards of your opponent keeps you constantly watching what they’re doing.  It gives you so many more options with your turn as you try to find a way to improve production and gather more tokens.

There are many reasons now to interact with your opponent’s cards – and the nature of the interaction will likely depend on a number of factors.  First, the natural predilection of your faction will likely push you towards either cooperation or conquest, just as you would with regular cards.  Second, there are a lot of goods which can be had with a quick strike.  Third, you can actually affect multiple opponents with one attack because if you can conquer a card, any cooperation faction tokens are also removed from the card.

However, there is also a downside to conquering your opponent’s cards – and that is the threat of reconstruction.  If a player has Ruins in his area, he can easily place cards down in that slot – even if he doesn’t have the required tokens for distance!  All he needs is a brick.  And, to top it all off, he’ll score 1VP for doing the reconstruction… So, you have to think both short-term and long-term about conquering cards.

Of course, you could just try to cooperate with your opponents.  Your marker doesn’t harm them in any way, and it increases your production each round.  Heck, if you have a bunch of extra blue markers floating around, it may be worth your while just to try to establish new cooperation just to get more resources to use later in that round!

It feels like the game length is unchanged.  In some ways, the game is sped up – mostly due to increased production – it seemed like people were able to start each round with a few more things due to the cooperation with opponent’s cards.  To balance this out, each round took a bit longer as it did take a little more time to look at all the cards in your opponent’s area to decide if you might try to cooperate or conquer them.  I’d guess that the game still takes about 5 rounds on average to complete.

I love the fact that you can retrofit the Interaction rules onto the cards from 51st State – and if I get motivated enough, I might simply add a color coded sticker to the appropriate area of those cards – though it’s honestly not hard to remember the rules.  However, that might not become necessarily because the 70 cards included in New Era have certainly provided enough variety and challenge – it hasn’t felt (yet) that we would need to add in te cards from 51st State to keep it interesting.  (It should be noted that there are probably about 10-15 cards which are repeated in both sets, so if you combine decks, I’d probably take out the duplicate cards.)

If you haven’t already played 51st State – I’d honestly tell you to just go straight to New Era – you get all the good things in the original game but with all the extras too!  If you already own 51st State, the new rules here definitely make it worth your while to try this one out too…  There is definitely reason to own both sets though as there are many cards which are only found in 51st State that can help add to the deck in New Era!

Now – time to head to Essen and play with the real cards!  And… also get a look at Portal’s other game, which I’m drooling over too – Pret-a-Porter – which Liga has already previewed in an earlier post! 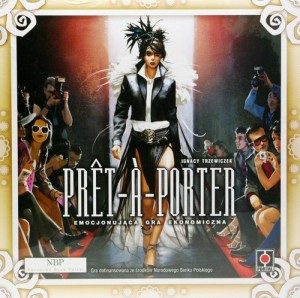 Dale Yu is the Editor of the Opinionated Gamers. He can occasionally be found working as a volunteer administrator for BoardGameGeek, and he previously wrote for BoardGame News.
View all posts by Dale Yu →
This entry was posted in Convention Report, Essen 2011. Bookmark the permalink.

1 Response to Essen Preview #20 – The New Era by Portal