OK, back for just a little bit… it’s almost midnight, and there’s not much time until the fair opens again in the morning!  The fair was lightly packed today (since there is not the school holiday this week), but that’s not to say that many people weren’t all trying to buy games.

The morning for me and many others that I know was filled with picking up pre-orders and checking out the limited edition games.  High on my list for today were MIL (1049) and Space Bastards as each of these only had 300 copies at the fair.  Other things high on the Thursday morning list were Poseidon’s Kingdom, Vanuatu, Trajan, Terra Evolution and Paperclip Railways.

(Not many copies of Poseidon’s Kingdom left, and none for sale – all that remain are for preorders)

As I mentioned earlier, the first two hours of the day was nothing but acquiring games.  I managed to fill up 3 IKEA bags full of stuff in two hours.  After a quick trip back to the hotel to drop it off, take a picture and upload it to the blog, back to the fair for lunch — Bratwurst at the snackpoint.  The afternoon was spent wandering through the halls picking up more games that had interested me from my research prior to the fair.  Two more IKEA bags were filled up during the afternoon and brought back to the hotel room at various times. 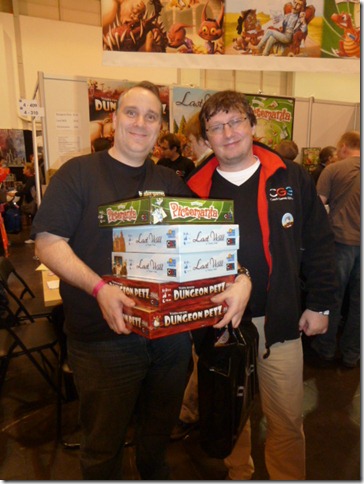 (Here you see Patrick Korner picking up his bundle of Czech games, stopping for a chat with Vlaada Chvatil)

I stopped in at the Days of Wonder booth, and I did learn that Ticket to Ride: India should make it to the US by late November or early December.  It is not available at the show.  Ticket to Ride: Asia, however, is here and appears to be selling well.

(Myself, Greg Daigle – the designer of Hawaii, and Valerie hanging out)

The day was capped off with a nice meeting with Touko T. and the guys from Lautapelit.fi where we got a personal demo of Eclipse.  I must say that I wasn’t sure if this was going to be my sort of game, but after the rules explanation and a close up look at the art and production quality – I must admit that I can’t wait to try to get it on the table.  The game was inspired partly by the computer game, Master of Orion, and it definitely is a complex game which will take a couple of plays to learn the tech tiles.  According to the designer, two players who know the game should be able to play a complete nine-round game in about 40-45 minutes.  That would be an impressive feat for such a complicated game.

Then back to the hotel.  Two games played tonight, both are quality games from my point of view.  First was Helvetia (Kosmos) which was more complicated that I had thought it was going to be – but in a good way.  An interesting combination of mechanics that works well together.  Second was Ab in die Tonne (Cwali) which was a lot of fun.  It is game where you are dropping cardboard pieces of garbage into your bin in a Take it Easy manner trying to keep things as compact as possible.  Much fun, and something that should be a hit with the kids.

(Admittedly, not an optimal first turn at the game)

Finally, something that might interest only me… I did bring a pedometer with me just to see how far that I’ve walked while here.  Here are the totals so far

Finally, a few pictures of the rest of the day’s acquisitions:

Now I must go – do a test pack to see if I have any space or volume left over and then hit the sack!  Hopefully more tomorrow!