Kulami is a combination area majority/connection game. The game comes with a modular board made of wooden tiles of various sizes ranging from 1×2 spaces to 2×3 spaces. The game also comes with 2 sets of player markers or marbles. You can use a standard 8×8 space starting board or the board can be set up randomly with no more than 10 spaces at the widest points. 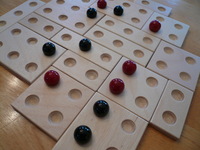 Start player places a marker. Then players alternate placing marbles of their color on the board. The new markers must be placed in the same row or column where the previous marble was placed but not on the same tile or the previous played tile. If no marbles can be placed, or players have used all the marbles the game is over. 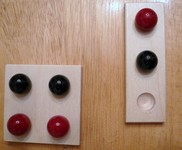 are discarded. Then the remaining tiles are given to the player with the most marbles on each tile. You score the number of spaces on each size tile x the number of tiles you have of that size.

The game is easy to teach and I don’t see any first player advantage. Occasionally, you can lose track of which were the previous played on tiles as the board fills up, but generally this isn’t an issue and is usually easy to figure out. The modular board makes re-playability interesting. With an irregularly shaped board it leads to more interesting forced moves since if one row of a tile is sticking out by itself it limits the next play to the column only. I found the chain score most difficult to achieve and liked that one best. So all in all, Kulami makes a nice filler or a short 2 out of 3 for a game night.