Years ago, our game group (the infamous California FNVP’s) used to joke a lot about proper bagging of games, from bag quality to how to properly organize game bits within games. Someone (might have been me, not sure anymore) mentioned that there should be a group that you belong to that has these rules, and the term Bagging Monthly was formed. Since then, Bagging Monthly, which never existed (though one FNVPer did create a Geeklist of that name a few years back), has been used as a threat “you’re going to be kicked out of Bagging Monthly if you do that” and also has had a regular presence in Board 2 Pieces, where we catch glimpses of meetings in progress.

Recently, as I was bagging a bunch of prototype pieces, I thought, “Gee, I wonder what the folks at Bagging Monthly would think about the way I’m bagging,” and then a few seconds later I realized that I was mildly concerned about what a ficticious organization would think. After shrugging off my obvious mental descent, I thought, “why, darn it, isn’t there an actual organization that’s responsible for bagging protocols?” So here I am, attempting to put down, in a somewhat-monthly format, those very protocols and guidelines that gamers often discuss, but of which there have not been any hard and fast guidelines. Until now. Welcome to the first “issue” of Bagging Monthly.

Currently, there is only one bag brand/quality that is Bagging Monthly Certified: Uline 4 Mil Reclosable Bags (http://www.uline.com/BL_211/4-Mil-Reclosable-Bags). That’s it. After testing hundreds of different bags from as many manufacturers, and at different thicknesses, Uline 4 mils are the bag every boardgamer should use.

While this is the king of all bags, there are other, lessor bags that can be used for games in a pinch. And of course, with only a few exceptions, bagging is better than not bagging, even if you need to use a substandard bag. In fact, bagging properly with poorer quality bags is actually preferable to incorrect bagging with quality bags, though there are of course exceptions to this.

But let’s spend some more time talking about the Uline 4 Mil bags. Uline is a company that provides various materials for retailers and manufacturers, but also sells directly to the public (providing the quantities you’re looking for are high enough). They sell most of their plastic bags in cases of 1000, separated into 10 bags of 100 each. Here’s a case of them with only 300 bags left in it (time for reordering!): 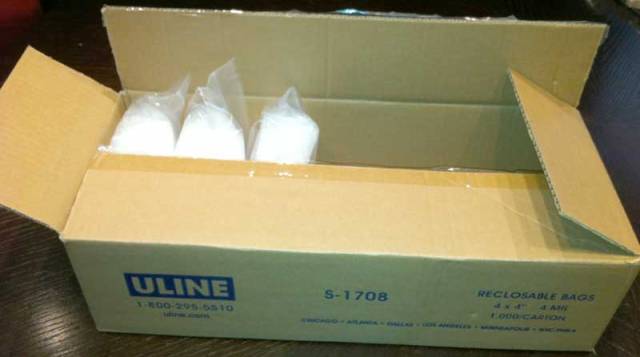 Depending on the size you get, your current collection and how many games you purchase, a case will last most gamers years and years of bags. We often split orders up between several gamers for the most common bag sizes (right now our favorite is 4”x4”, but that’s changed over time from 3”x4” to 3”x3” to the current size). Some companies, like Boards and Bits, carry 4 mil Uline bags that they sell in the 100 bag quantities. Here’s a picture of a bag full of 4″x4″ bags:

Here’s some of the different sizes you can get the bags in:

These are what people often refer to as “Ziploc” bags, though Ziploc is a brand, and they actually don’t sell bags of an appropriate size/thickness to use for boardgames. These small, clear, plastic bags use a built-in plastic interlocking sealer that’s easy to close and easy to open, but when closed is water-tight. Uline’s plastic reclosable bags have a little “snap” feel/noise to them when closed properly.

The 4 mil portion of these bags is critical. “Mil” refers to the thickness of the plastic, measured in 1/1000ths of an inch. It’s NOT a millimeter (in fact, a “mil” is actually about 1/39th of a millimeter). For comparison, outdoor garbage bags you can buy at Costco are 1.2 mil, while indoor clear bags are only 0.4 mil. Sandwich bags are typically 0.5 to 1 mils.

So why 4mil? Uline sells bags that are 2 mil and 6 and 8 mil, so why go with 4 mil? To answer that, you need to compare those bag thicknesses. 2 mil is very flexible, but doesn’t really provide protection for game pieces. 6 mil is sturdy enough, but ends up being too rigid, especially when you need to fold a bag slightly to make it fit in the box or insert. 4 mil provides just the right amount of flexibility and rigidity for wooden game pieces and cardboard game pieces. It’s also adequate for dice and plastic pieces.

Sandwich bags of the ~1 mil thickness are really only good for separation of pieces, not protection. They’re also prone to holes from sharp edged wooden pieces, which means those very same pieces could fall out of the bags that were supposed to keep them safe. Finally, sandwich bags just look cheap, especially if they have the colored zips or protruding zippers. 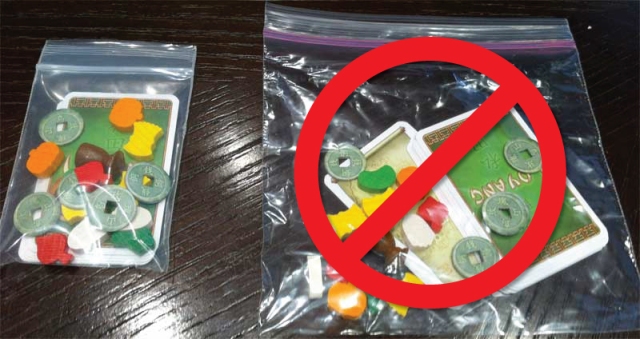 Notre Dame is a great game to use as our inaugural bagged game example. It has a wide variety of components and some really odd, unusual pieces, as well as multiple sets of cards. All components but the rules and large game board sections are bagged. The very generic black plastic insert was removed (generic inserts tend to just get in the way of properly bagged pieces).

First, the easy stuff. 4×4 bags for both the money (25 gold coins) and prestige tokens (84 mini hexagons). 4×4 is a little large (you could get away with 3×3’s, though that would be a little tight for the prestige tokens), but it helps maintain consistency, allowing only two different bag sizes in the game. 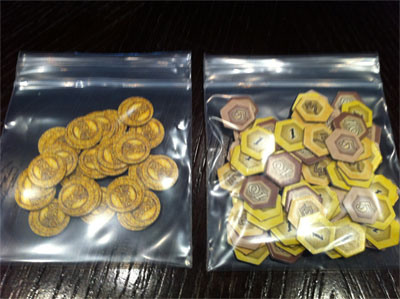 I also place “the bell ringer” (the hunchback) in a 4×4 bag. This is to ensure he’s protected; it’s much less likely that he’ll come off his plastic base when in a bag. And as always with plastic bases and cardboard standups, if you can keep them connected between games it’s much better, otherwise the cardboard condenses and the connection is loosened, resulting in the cardboard slipping out of the plastic base during gameplay.

The Notre Dame tiles (central cardboard pieces that help structure the board for 2, 3, 4 or 5 players) are placed in their own 4×4 bag. It’s roomy enough, and regardless of how they’re stacked, it’s easy to pick the one you need for the game you’re about to begin.

For the 15 person cards, each card is sleeved (using clear Dragon Shields) and then they are placed in a 4×6 bag, which gives them plenty of room to be inserted and removed. If you have the Alea Treasure Chest expansion, which contains nine additional cards (I have this), they’ll fit in the 4×6 along with the original cards. Since we always play with the expansion cards (though we use the house rule of showing everyone what the cards will be since the expansion cards can bring huge swings of luck if they’re unknown until revealed), there’s no reason to keep them separate for us. If you don’t play with the expansion regularly, you might want to keep those new cards in their own 4×6.

The remainder of the pieces are divided up as they should be for each player, with each 4×6 player bag containing the following: 9 Dragon Shield colored-back cards (with the color back matching the player color), 4 messages, 1 carriage, 1 trusted friend, 1 “rats” black cube, and 14 influence cubes. In a typical set without the special gold coins (see below), you also should include 3 gold coins with each player bag (so the gold coin bag, noted above, would only have 10 coins in it). As always, player bags are critical for quickly getting a game up and running (just toss a bag to each player), and only take a few extra seconds to bag when putting the game away. 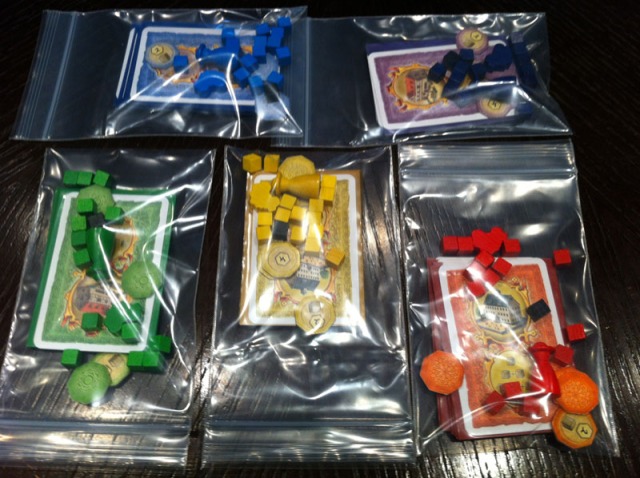 In my game, I went a little crazy and purchased 25 authentic Notre Dame commemorative coins from the vending machines in Notre Dame (in Paris). They’re gold and about the size of a 50¢ piece, and very awesome. Those coins I keep together in their own 4×4 bag, because the weight of 3 coins in a player bag could conceivably damage a wooden piece or bend a card. So I have a tiny bit more setup when starting a game, as each player will get 3 coins from this bag.

My copy of Notre Dame probably has about 40 some plays to it, and while there’s a tiny bit of wear on the box, the pieces are perfectly preserved in near mint condition. As they should be.

This entry was posted in Game Modification. Bookmark the permalink.