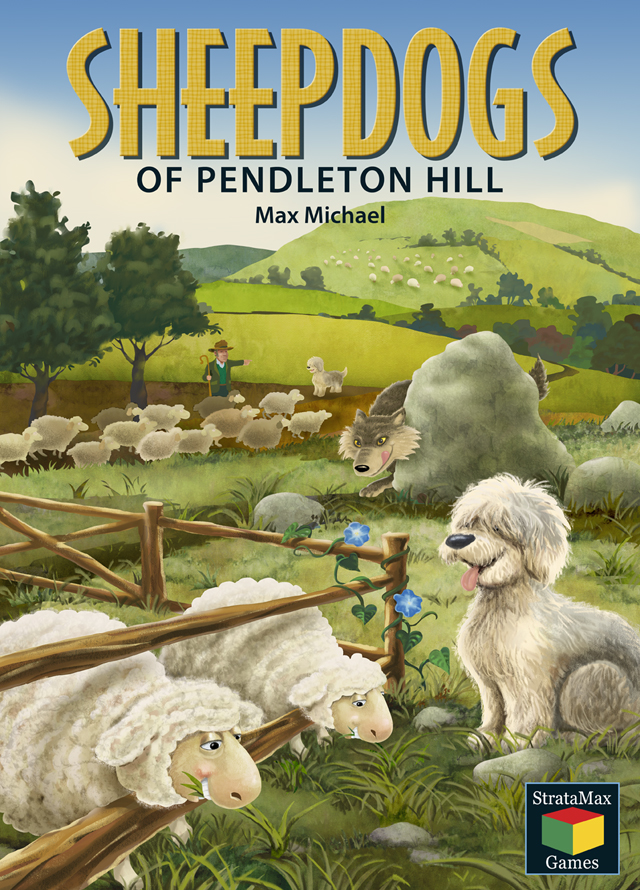 Overview – Each player in Sheepdogs of Pendleton Hill (SoPH) is trying to score points, something that happens when a sheep of his color is in the same space as a shepherd of his color. There are four levels on the hill, and at the bottom of the hill, there are three pens to collect the sheep.

In setup, shepherds are placed on the spaces on the two top-most levels, and then each player places two more shepherds on spaces of their choice – the one restriction being that each color can only have one shepherd on any given space.  The wolf is placed on the center spot on the 3rd level.  Each player is then dealt 3 cards from the deck, and each player gets a special Sheepdog card in his color.

Turns are very simple – you play a card, take the action based on the card played and then draw back up to three cards.  There are only three types of cards in the deck: “1”, “1+1”, and “2”.  The numbers on the cards tell you how many actions you get.

If you play a “1” card, you can perform a single basic action.  The choices here include

If you play the “1+1” card, you get to take two actions from the same choices of the “1” card.  The catch here is that one action must involve only pieces of your own color, and the other action must involve at least one opponent’s color while not using your own.  These actions can be done in any order, and the same action can be done twice – as long as the rules for color are followed.  Note that with the “1+1” card, you would never be able to move a flock of sheep that includes both your color and an opponent’s color.

If you play the “2” card, you get to take two actions from the choices of the “1” card, but in this case, both actions must involve their color in some way.  These actions can also include their opponents as long as the active player’s color is represented. Thus, you could use one of the actions of the “2” card to move a mixed flock of sheep.  You also have an extra option with the “2” card, you could move the wolf.

If you choose to move the wolf, this is the only action you take with the “2” card.  You can move the wolf up to two spaces (up, down or sideways), though the wolf will stop as soon as it comes into contact with a flock.  When the wolf hits a flock, it scares off a single sheep in that flock (of the choice of the active player) – and that sheep is returned to that player’s supply.  No points are scored for that sheep.

The fourth card type is the special Sheepdog card that each player gets at the beginning of the game.  This Sheepdog card is essentially a one-use wild card.  It can be played at any time in lieu of a card from your hand, and it can be used as any of the above three types of cards.  Once used, it is discarded from the game.

The Board from SoPH

OK – so that’s how you play cards, and what you do with them, but how do you score points?  Anytime a shepherd and a sheep of matching color are in the same space, points are scored and the pair of pieces are removed from the board.  Each shepherd can only match up with a single sheep.  The number of points scored is equal to the number on the space: 7 points for the highest level, 5 for next, then 3 and then 1 for the bottom-most level.  This pairing ONLY occurs when a flock moves into a space where a shepherd already is.  If a shepherd is placed from the supply into a space with a matching sheep, no pairing is made and no points are scored.

Since sheep only move sideways and up, if a sheep ever makes it to the top of the hill and there is not a shepherd there to collect it, that sheep simply is returned to the player’s supply and no points are scored because there would be no way to ever score that sheep.

The game continues until all cards in the game (both from the deck as well as the sheepdog cards) have been played.  Whomever has the most points at that time wins th game.

My thoughts on the game so far: Well, I’ve played it three times now – once with my regular gaming group and twice with the boys.  It was a decent filler for the regular gamers, but it was definitely enjoyed more by the kids.  The complexity of the game has been better suited for the family setting than my “serious” gamer group.  It feels about as meaty as Clans which is another game that fills that same 30 minute filler role.

There are some difficult choices to be made at times, though a lot of the decision is driven by which cards are in your hand.  I like the way that the different cards lead to different actions based on the color restrictions.

The game moves along quickly because the turns are simple.  There are actually a fair number of options with each card, but once you are familiar with them, it’s pretty easy to plan your turn.  For me, the big challenge is trying to figure out how to manipulate the flocks to get your sheep closer to the top before the other players figure out how to score them for you close to the bottom.  Since you can only take two actions at a time, you generally have to rely on at least one other player to do your dirty work for you.

As with many games that allow targeted attacks, the winner of the game is the player who is able to orchestrate a great turn close to the end – because if you manage to jump out to an early lead, you can be constantly targeted by other players.  When your shepherds are placed on all the lower pastures, and your sheep are continually moved into those spaces, the early leader always seems to come back to the pack.

However, that’s not to say that there isn’t room for good play.  If you can manage to get your sheep moving upwards, you only have the wolf to dodge since the sheep can’t go down the hill nor can a pair be made if a shepherd is placed in that spot AFTER the sheep is there.  Saving your “2” cards or Sheepdog cards for a quick rush up the mountain is a good strategy.

I cannot speak to the production qualities because I have a pre-production version of the game, but the artwork is clean and generally pleasing to the eye – which is something that I haven’t been able to say about some other recently released games. Certainly some of the older StrataMax games were a bit spartan in the component department, but from what I’ve seen of the plans, this should be done in professional manner.

StrataMax Games will have their own booth at Essen this year.