Dale Yu: Report from Essen 2012 and my Adventures in Packing

Finally getting a breather from work to catch up here on the blog.  The tempo of the week was more like the first Essens that I went to – the week again starts on Tuesday, and much game procurement was had early in the week.  While there was a security presence on Wednesday again, they were not as strict in monitoring activity.  The rule seemed to be that no money could change hands, but picking up pre-paid preorders was definitely kosher on Wednesday.  As a result, I was able to pick up a bunch of stuff on Tuesday and Wednesday which really helped make the rest of the week less frantic.

Here is a calendar of the games I picked up on the days in Essen:

(Trip back to room) 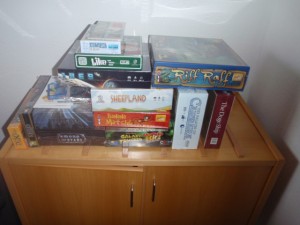 (trip back to room)

(trip back to room)

Everything wasn’t seamless though, because there were some significant snafus with security during the actual days of the fair.  In years past, members of the Press as well as game designers used to be able to enter the halls early at 9am (one hour before the main gates opened) – and this was an invaluable hour to meet people and take pictures before the halls were awash in gamers.  There was mass confusion this year as none of the security members seemed to know the policy for this year.  Some guards let people in early while others didn’t.  Each morning, I had to essentially hope that I picked a door with a guard that would let me in early.

Crowds seemed heavy as they usually are when the NRW region has school holidays during the week of Spiel.  It felt that Thursday was the busiest day in the halls with families.  It also seemed like many people that were there for only a short period of time were there for Thursday in order to pick up any limited quantity items and/or preorders – though, interestingly, this year had fewer Essen-only promotional items than any other year that I’ve been to Essen.

Thus far, everything has made it back (safely) from Essen.  There were a few boxes that didn’t survive the tender loving care of the Delta baggage handlers, TSA and/or the USPS, but on the whole, I’m happy with the state of my games. I think that I’ve learned a few things over the past ten years in getting the games home safely.

In my bags this year, I brought home about 50ish boxes, and really only four of them were crushed – and these were three boxes that I intended to act as cushioning anyways… The sacrificial lambs are: Ladies of Troyes, Magnum Sal: Muria, King of Tokyo Power Up and Rumble in the Dungeon.  All of these were packed on the extreme ends of my duffel bag, and they were honestly put there to serve as cushioning / crash zones to protect the other boxes found in the interior of the duffel bag.  Why did these four boxes get the short end of the stick?  Is it because I am not anticipating these games as much?  Actually – no.  The real reason is that each of these games is an expansion/game whose bits will fit nicely in the boxes of the original.  So, it would have been nice if they survived, but it’s no big deal to me if they didn’t because they’re not essential.

Otherwise, packing things as tightly as possible in the duffel bag seems to have worked again, and there is only a minimum of crushed corners, and two boxes whose tops are bowed – and this is my fault for not packing them full enough with laundry…   The bags this year were again packed to capacity, there was less than half a pound to spare between my suitcase (49.7 lbs) and duffel bag (49.8 lbs), and let’s just say that my carryon might have exceeded European limits on weight (40.8 lbs – though surprisingly, not Delta domestic regs which actually now allow 40 lbs). 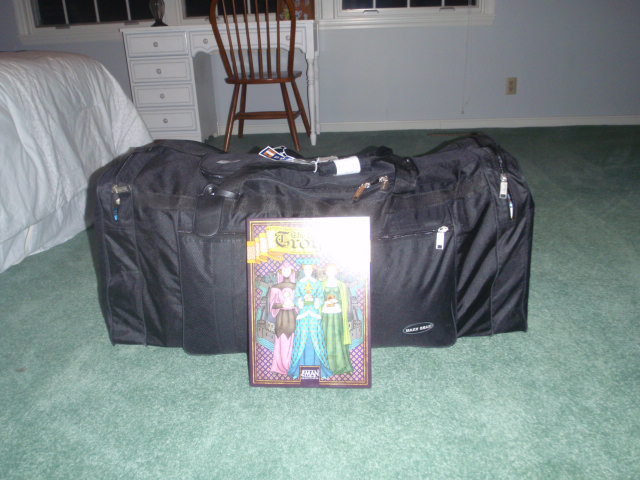 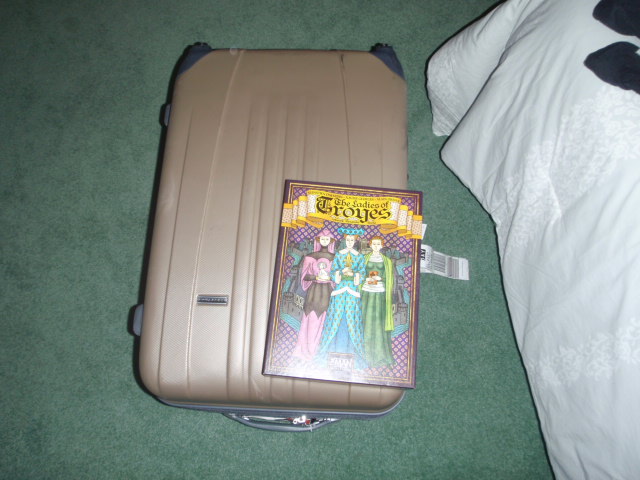 Expandable 29″ suitcase with ladies of troyes for scale 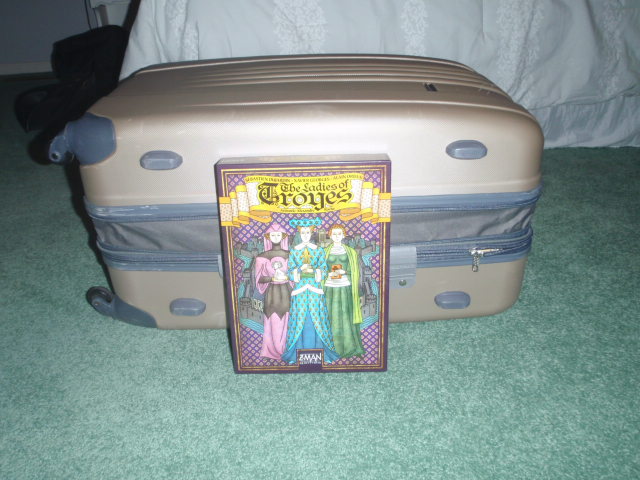 Expandable 29″ suitcase with ladies of troyes for scale

So what is my strategy – still mostly the same as last year, though I do think the process is improved every year.  The big change this year is that I planned on mailing a box home from the start – in fact, I brought the empty box over with me, folded up in my suitcase.  The big things I try to do when packing:

Remove all the heavy stuff from the boxes.  Heck, boxes on their own aren’t light.  But the boards, cards and wooden bits are super-heavy.  I bring some humongous slider bags which I use to hold contents.  My secret source for bags is: Dollar Tree – in fact, it’s the only place that I can find the particular bags that I like to use.  They sell 2 or 2.5 gallon bags, which are ginormous.  But, they are >30cm wide which means they can hold the board of just about any Eurogame that I buy.  So, as soon as I open a game, the board and punchboards all go into a baggie, and this is marked with a Sharpie or with the rulebook facing outwards for easy identification.  Sometimes the cards/wooden bits/rules/etc go into that same bag, sometimes they go into a separate one.  I like to keep the board bags flat so they stack better.  Most of these bags go into my carryon, though this year, some went into the box I was shipping home.  Also, I usually take the inserts and fold them backwards so they lie flat in the bottom of the box.  This gives me a lot of volume in the box to fill it with other stuff and also preserves the insert in case I want it when I get home.

So does that mean that my two pieces of luggage are simply filled with empty boxes?  Well, not quite – and in fact, I’d say that I try to never send home an empty box – this is an invitation to crush city.  So how are boxes filled?

Nest boxes whenever possible – thank god for the Italians this year.  Many of their games are square, but just smaller than the traditional European 30cm square size – so Ark & Noah, 1969, Sheepland, etc. all fit inside other big squares.  Anything small gets shoved into one of the bigger boxes – and again, even the small boxes might be empty with their contents in a Ziploc bag.  Also, a lot of the other Italian games were smaller than expected (Like, Oddville) and could also be stored inside other boxes. Examples of nesting:  1) ark+noah inside qin, 2) 1969 inside tzolkin, 3) Banana matcho inside pyramdion.

So what came home?  4 bags total on the place, packed to the gills.  Also, I had a friend who was able to help my local group out by shipping back two boxes for us.  In the list of bags below, a game followed by an asterisk is an uncomplete game (the rest of the stuff was sent in the boxes) 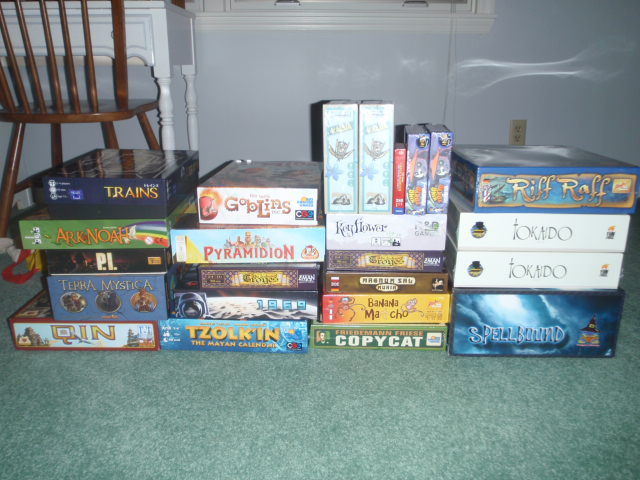 The games from the black bag

The t-shirts in the black bag – workout gear! 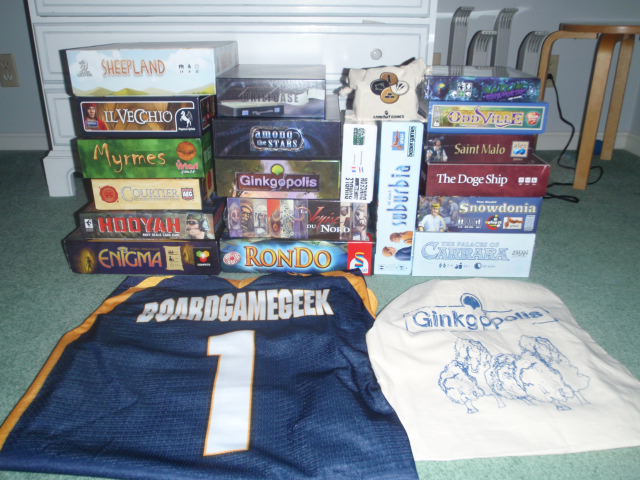 Contents of the Champagne bag

Backpack – did not weigh

In mail while I was gone:

So, back to those boxes.  Apparently the two boxes that I had packed to come home ended up dividing and turned out to be three boxes.  The larger box was a bit too heavy for the box, and my buddy was a bit concerned that the box wasn’t going to make the trip – so it was repacked into two smaller boxes.  Here is the original manifest – all the things on one line are things that are nested into one box – the box comes first and the contents come later 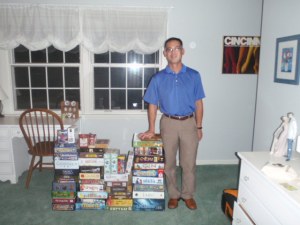 Here is where I would have put the picture of the contents of the box, but the camera didn’t save the pics. So here is the airline contents with me for scale instead

Proof that the boxes made it at least

And, to continue to report on my activity levels – much walking goodness was had while in Europe.  This year, I measured my activity with my new Nike Fuelband watch.  It is a accelerometer worn on your wrist, so it isn’t the most accurate pedometer since it really is measuring the amplitude, frequency and speed of my left arm swing.  In any event, I figure it all averages out over the course of a day.

For the whole week, this adds up to a total of 59.44 miles – not a bad total at all!  I also managed to set the highest NikeFuel total for any Tuesday, Friday or Saturday while on the trip!

OK, back to playing games, and soon, I’ll be back in full writing mode.  According to my Essen spreadsheet, I’ve now played 32 different Essen games in a total of 49 games – I also have two gaming weekends set up surrounding Thanksgiving, so many more should hit the table soon!

2 Responses to Dale Yu: Report from Essen 2012 and my Adventures in Packing