Can 8-bit retro stylings live together with Dominion in a house made chips? Read on the find out.

Puzzle Strike, the base game, is very well regarded chip-builder, a deck building game where each player has a bag of chips with text on them. The game that has its roots in video games and Dominion. The goal of the game is to smash gems on to other player’s boards. The player mats are modeled as video game screens and when someone’s screen fills up with gems, the game is over and that person loses. If the game is with three or four players, the player with the fewest gems on their board is the winner. Puzzle Strike: Shadows is the Dominion: Intrigue of the Puzzle Strike line. It is an expansion and also a stand-alone game. The chips in the game tend to have more interaction with other players than the base game. 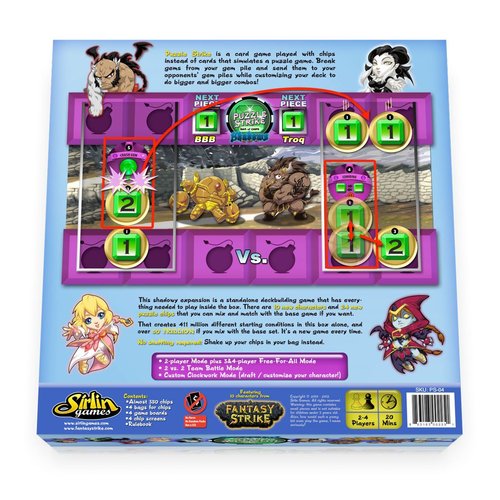 The back of the box illustrates the key mechanism in the Puzzle Strike series, you use a chip to send gems on your board to another player. They in turn can combine gems, such as converting two 1s into a 2. Then they can send that gem back to you, which becomes two 1s in your gem pile, making it harder to shrink your pile. The game has a largely closed economy, so it cannot go on forever, but we have never gotten a four player game done within an hour. With two players, that is an entirely reasonable time period.

You start with ten chips, draw a hand of chips, play them, then place the discarded/purchased chips in a discard pile. When the bag is empty, you dump the discard pile into the bag and keep going. Like other deck builders, along with dumping gems on other players and combining gems, you can buy new chips from a central market. These have the powers you would expect in such a game. In addition, you can always buy gems and chips that combine gems plus those that send gems to other players’ boards. You buy new chips with gems from your bag, not your board. This is very important. Gems in your bag are money. Gems on your board are bad, as they mean you are closer to losing.

There is a spot on your mat for lasting effects as well as as spot to play chips in a certain order. One nice feature is that Puzzle Strike uses color as well as text and icons to highlight the powers, so you can look for the color of effect you want when skimming the market. In addition, certain other chips activate all chips of a certain color, so the color is more than just a player aid.

So, if you are thinking that you can ignore Puzzle Strike and just go back to playing Dominion, hold on a second, as Puzzle Strike adds some great features to the deck building genre.

1. Chips – You might think it is does not really matter, but honestly, shaking a bag of chips is way easier than shuffling cards and then having other players tell you you have not shuffled enough. The games trays make set up and cleanup fairly simple. Honestly, some will prefer cards and others chips.

2. Special characters – Each player starts as a special character. That characters’s base set of chips is different from that of any other player. That means you have special abilities that no other player has or can have, as they are not duplicated on the chips that are available for purchase. You need to buy additional chips that play to your character’s strengths or be left in the dust. Some characters are easier to play than others and the rulebook makes the different characters comprehensible.

3. Attacky – The goal of the game is to create an engine to rain gems down on other players or to keep them off your own board to survive. PS: Shadows has lots of chips that cause interactions between players. In these cases, you get to choose who you target in a 3 or 4 player game. There can be piling on against a single player if the other players feel that they could win if the end game is triggered soon. To me, Puzzle Strike is a 2 player game with the option of adding more players if necessary.

4. Art/Theme – The game has a distinctive character that draws people in. Gone are medieval towns, dungeons, or outer space. We are in an 8-bit combat arena where you can imagine the gems falling to your mat, Tetris-style. All the player screens have that pixellated look and evoke an era. I never got into the puzzle fighter genre, but for someone who is, this game will, I am told, bring back fond memories. Note the inside of the player screens shown below. 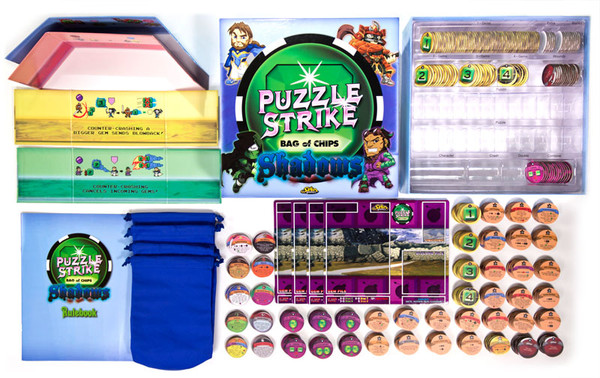 The base game has gone through several iterations and is now tuned to the designer’s goals based on in person and extensive online play. In addition to Puzzle Strike, 3rd. ed., Puzzle Strike: Shadows, there is also a promo pack of additional chips available from the Boardgamegeek Store.

In conclusion, I am not an attacky gamer, but had a good time playing Puzzle Strike: Shadows, especially with one other player. The chip combos are good fun. The fact that you have special abilities means players are not all rushing for the same chips. And unlike the video game works, it is turn-based, so no coordination needed.

Matt Carlson: I’m a sucker for deckbuilding games, and while Puzzle Strike doesn’t fall far from the Dominion tree, it does have a nice theme that I enjoy and the non-shuffling chips are a nice feature for playing. The whole concept of combining gems and rolling to an epic conclusion (since the worse off you are, the more chips you get to draw into your hand) make for a different “feel” than a typical Dominion game. Also, I think the “starting character” chips are a cool idea in concept and add some nice variety, but I find them slightly underwhelming in practice. They help out, but far too often they don’t dictate or contribute too much to my overall strategy. They add nice flavor to your personal game, but not much more than that. I think Jonathan did a nice job covering the theme of the expansion and while I’ve played the new (and old) editions of the base game I haven’t played enough of Shadows to form a strong opinion. (Perhaps that says enough right there…) However, I think Puzzle Strike is most fun when played as an interactive, aggressive type game. I do recommend the game to any deckbuilder fan (especially those sick of shuffling) and since Shadows seems to slightly emphasize the player-player interaction I think it is the better representation of what I like best in the game.