Warning – do not play this game or read this review when hungry!

Sushi Go! is an adorable drafting game that is perfect as a light filler or an after-dinner game with non-gamers. No steak here, so gamer snobs can move on. The rest of have a tasty treat ahead. 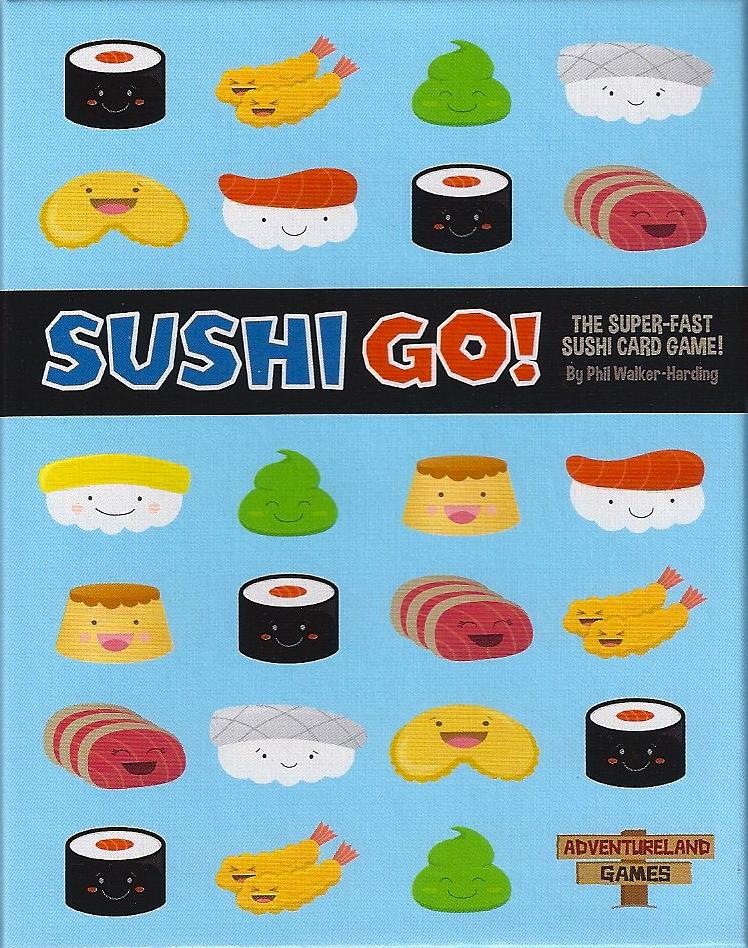 Sushi Go! is a drafting game. Instead of the three ages of 7 Wonders, in Sushi Go!, you are eating three meals, we call them Breakfast, Lunch, and Dinner, but this is not explicit from the instructions. All players pick up the pile of cards they were dealt, choose a card to play, play their chosen card simultaneously, then pass all the remaining cards to their left. No paying for cards here – just pick it and play it. Pass your hand and repeat until all the cards have been played. At the end of each meal, score your tableau of cards and discard all but the pudding cards. Then it is time for the next meal. After three meals, you score your pudding cards, desert, of course, and determine the winner.

Cards vary from straight points (nigiri worth 1, 2, or 3 points, depending on whether it is egg, salmon, or squid) to cards that need multiples. For example, for every two tempura you have, you get 5 points. For every three sashimi you have, you get 10 points. Dumplings earn you more points per dumpling if you have more dumplings. 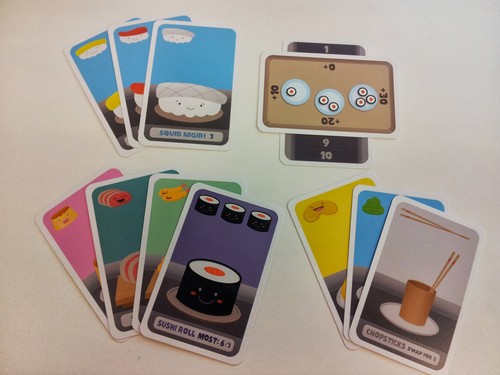 There are four special cards as well.

Sushi Roll cards have one, two, or three rolls on the top. The player with the most rolls for the round gets 6 points and second place gets 3.

Wasabi triples the value of your next nigiri played, but is valueless itself. Wasabi + Squid Nigiri = 9 points for 2 cards! 3 points for the nigiri times 3 for the wasabi. If you have an open wasabi and play a nigiri, you must play it on your open wasabi. Do you play the salmon nigiri on your wasabi for 6 points, or hope the cards you are passed have a squid nigiri for 9?

Chopsticks earn no points, but they let you play a second card on one hand later in the game. You play two cards from the deck you are handed, then place the chopsticks back in your hand before passing it to the next player. This way the hands all keep the same number of cards, but you got to defer an action until you got a juicy hand passed to you.

At the end of each of the three rounds, you discard all nigiri, sushi rolls, wasabi, chopsticks, sashimi, and tempura. That is not the case with pudding, as you cannot have pudding until after you have finished your dinner. After the third meal/round, everyone compares the number of puddings they have. The person with the most gains 6 points and the person with the least loses 6 points.

The designer did a great job covering ties and all other rules issues in the booklet that comes with the game.

After a tough day at work, Sushi Go! is a fun family game to plop down and play. The art is great and the game is fun. No one is blown out and the pace is quick as analysis paralysis is basically absent if you consider the expected value of the cards you have.

There are a few tiny things that keep me from ‘loving’ it, but I also see suggesting it on a semi-regular basis in social settings.

We found the loss of tempo in playing chopsticks was not often worth it, as some cards are ‘better’ and hence get played earlier. For example, there is no reason to play an egg nigiri (1 point) before a squid nigiri (3 points), so giving up a salmon nigiri to play a chopsticks is mostly useful if you have played a sashimi and have not seen many other hands, so you play the chopsticks in the hope of finding a hand with two sashimi in it.

It can be a very quiet game, so we instituted a house rule that you have to say what you are playing. That adds some feeling of excitement and interaction.

The scoring cards are well designed and should probably become a standard for card games that require interim scoring.

All in all, Sushi Go! is a bento box of fun.

Patrick Brennan: The lightest of light fillers, it takes the Fairy Tale model and reduces the scoring combos down to just a handful, allowing the game to be played in half the time. Pick a card, add it to your tableau, pass your hand to the left. Repeat ‘til all cards are gone. Score. Do two more hands. In the time you’ve taken to read this, the game is close to over. If the 5 minute game niche is one you need to add to in your collection, this will do the job. If you enjoy the search for combos in the pass-on genre though, you may want to stick with the longer games, as the combos come fast and easy here.