The Kingdoms of the Crusaders 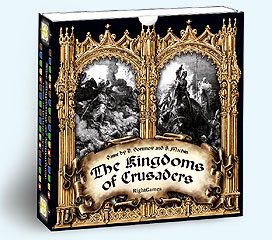 Knights converge on the Holy Land intent on wresting control of this sacred area from enemies of the Cross.  Titanic struggles ensue as powerful forces clash for control and strive to obtain glorious victories that will lead to “worldly power and eternal glory.”

Such is the theme of The Kingdoms of Crusaders by Russian designers Danila Gorunov and Sergei Machin.  While the underlying game does involve conflict and competition for five different territories, in reality it is a fairly basic card game along the lines of Reiner Knizia’s Schotten Totten and Tabula Rasa.  The theme basically ends with the flavor text provided in the rules introduction.

The game consists of one deck of “unit” cards.  Each card depicts an atmospheric but very dark black and white illustration of 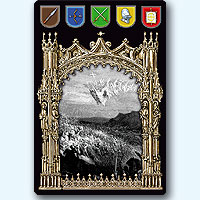 medieval warfare or conflict.  In addition, there are up to five different-colored shields along the top of each card.  A few cards depict all five shields, but most depict less.  These shields vary in strength and are vital in the conflicts over the five kingdoms.  Shields furthest to the right (banners) are the most powerful, while the spears, located to the far left, and are weakest.  These are arranged in order from weakest to strongest, so it is simply to ascertain the overall strength of an army.

Similar to the board in Knizia’s Lost Cities, a small placard depicts five fields numbered 1-5.  These are the territories (kingdoms) over which the players will compete.  This placard is placed between the players and they will play cards to the fields on their respective sides.

Each player begins with five cards.  A player’s turn is quite simple: draw a card and play a card to one of the five fields.  Each field can only have four cards on each side, so once a total of 20 cards per side are played the game ends and points are tallied.  The object is to gain control of the majority of the five territories, thereby winning the game.

In order to gain control of a territory, the player must amass the strongest force there.  Strength is measured in terms of three categories:

Battalion:  three identical shields on the cards played to a territory.

Company (weakest):  two identical shields on the cards played to a territory.

To determine the victor of a territory, first examine who has the 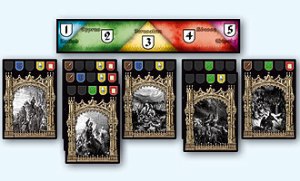 most regiments; the player with the most wins that territory.  If they are tied, the player with the strongest set of shields wins.  If still tied, players compare battalions in the same manner, then companies.  The object, then, is to attempt to form as may regiments as possible on as many territories as possible.  A wise player will also attempt to isure he has more battalions in the event of a tie in the regiment category.

Once each player has played 20 cards, the game ends.  The player dominating three or more of the territories is victorious and will live on in crusader lore for time immemorial.

The game appears to be heavily influenced by a collection of Reiner Knizia titles, including Attack, Lost Cities, Schotten Totten and Tabula Rasa.  It involves the same type of decisions:  where to compete for dominance, when and where to play cards, and which cards to play.  A player can play aggressively, or hold back, waiting to see the strength of his opponent’s forces before committing the appropriate cards.  This “chicken” element is a major element of the game, but eventually players are forced to play cards and hopefully tip the scales of the battles.  These decisions must be made throughout the game, and while not always very taxing, they still add an element of tension that makes the games mentioned above work.

As with many card games, however, the luck of the draw plays a significant role.  If you don’t draw the cards depicting the shields you seek, you will have a difficult time assembling a formidable force to conquer a territory.  Get lucky and you can dominate the field; be less fortunate, and you will find yourself being routed.  Of course, your opponent will likely also be in the same quandary.  Still, I have played several matches where the luck seemed to dominate the proceedings.  The game is quick, however, so many will not mind the considerable luck factor.

While the game bears much in common with the Knizia titles mentioned above, it somehow falls short of generating the same level of tension that is present in those games.  The spark that those titles seem to have is absent, and there isn’t that Knizia touch of genius.  The game works just fine, but it just isn’t particularly engaging or enthralling.  It certainly would serve well as a light game for folks who are not dedicated gamers, but gaming enthusiasts will likely find the Knizia titles more appealing.

Greg Schloesser is the founder of the Westbank Gamers and co-founder of the East Tennessee Gamers. He is also a prolific reviewer of games and a regular contributor to numerous gaming publications and websites, including Counter, Knucklebones, Boardgame News, Boardgame Geek, Gamers Alliance and many others. Greg has been a gaming enthusiast his entire life, growing up in our hobby mainly on the war game side. His foray onto the internet exposed him to the wonderful world of German and European games and now nearly all of his gaming time is devoted to this area of our hobby. He travels to several gaming conventions each year and is the co-founder of Gulf Games, a regional gaming get-together held in the Southern USA. Greg was born in 1961 and lived his entire life in New Orleans before moving to East Tennessee in 2005. He is married and has one daughter (now married.)
View all posts by gschloesser →
This entry was posted in Reviews and tagged Reiner Knizia, Right Games, The Kingdoms of the Crusaders. Bookmark the permalink.