There has been a lot of reprinted games in the past six months, and while I spend most of my time playing the new new games, there are a number of reprints that have gotten some old favorites back on the game table.  As all of these games are reprints, I not really focus on the gameplay, as there are multiple reviews available online from the original version.  What I will focus on are the changes (both in physical components as well as rules) from the originals.

The Downfall of Pompeii

I ran across this reprint of Pompeii at Essen 2013, and interestingly, I only saw it at the Mayfair booth – it was nowhere to be seen at the AMIGO booth.  Bernd Keller from AMIGO has gone online and said: “We don´t think that we can sell a resonable amount of games (read: realistic minimum printrun) in a resonable timeframe (read: at least a few years) so there will not be another version of the game with an Amigo logo.”

However, the folks at Mayfair think that they can make another go of it, and they have produced a new version in a Carcassone sized box.  Pompeii had been out of print for awhile, but the prices on the secondary market (upwards of $50 for a used copy) were evidence that the game was still in demand and being played.

Rather than re-invent the wheel, let me point you to a review of the original Mayfair version written by fellow OG writer, Greg Schloesser:

Components are somewhat improved in my opinion.  The basis for this is mostly due to the wooden bits.  The original version had different numbers of pieces in the player colors meaning that a two player game had to be red and black as they were the only ones that had enough pieces. The new version has 30 wooden pieces in all colors.  This does lead to a different issue – while you can now play theoretically with any of the colors, you actually need 36 markers for a 2p game, so you end up having to grab a few of an unused color to make up the difference…

The bits in the original version

The new version does not change the rules to the base game, though they did make use of the three previously blank tiles in the punch sheet to create a mini-expansion.  These “dual vent” tiles are simply three lava tiles printed on both sides with different symbols. When you draw them, you can choose which side to place it (giving you more options as far as where to place that tile). That’s really the only change.

I like the smaller form factor to the box as the current size fits more neatly with the other games on my shelf.  The smaller box now means that the board is a two-fold to fit in the box instead of a single fold, but this is not an issue for me. Also, I have not been bothered by the number of wood bits as I’ll frankly never play this (or pretty much any other game) as a 2 player game.

I’m glad that Mayfair has decided to reprint this, especially because I had sold off my original version long ago, and now that I’ve played it again, it deserves to stick around in the collection for a bit.

Matt Carlson: I had never played the original, so when a reprint came around (I didn’t even know it was a reprint) I was immediately attracted to the fun factor of tossing one’s pieces into the 3D volcano.  My most recent game was with a 1st grader, a 4th grader, and another parent.  We all had an absolute blast putting folks on the city and then running for our lives.  This is that rare type of game that is simple enough for a wide age range to grasp, has some strategy “meat” to keep adults’ interest,  and is combined with a very fitting “festive” theme.  This title won’t be leaving my collection any time soon.

OK, so all of the other games that I’ve highlighted thus far in the reprint series this spring have mostly had cosmetic changes.  Inkognito, most recently done by Ares, takes the original deduction game and adds a whole bunch of changes to it – almost enough that they could have called it a new game!

First, the physical appearance has changed.  Ares has hired Universal Head to re-do the graphics – they had worked together on Aztlan – and the new art uses the familiar Venetian theme with some beautiful new art.  The other change (extremely positive in my opinion) is that the game now comes in a standard 30cm box.  My original version comes in the MB humongous box that was also used for Hotels or for moving families cross-country.

But – the big changes are in the gameplay.  Though half of the design team (Alex Randolph) had passed away since the original release, the other half, Leo Colovini, worked with Ares to update the game. 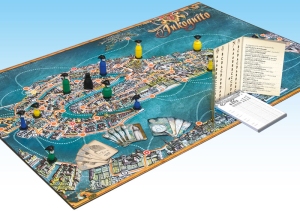 New board and pieces

The description for the original version: “The goal of each agent in Inkognito is to complete a mission, together with his partner. At the beginning of the game, however, players don’t know which mission they must fulfill!

In the standard four-player game, each player guides one of four secret agents. The four characters are allied in pairs: Lord Fiddlebottom and Colonel Bubble are always partnered against Agent X and Madame Zsa Zsa. Each of the four agents is represented by one of four different figures, with different builds: tall, short, fat, thin. Only one of them represents the actual character controlled by a player. The other three figures represent spies which are friendly to him and that are trying to confuse the opposition.

On a turn, a player shakes the Phantom of Prophecy randomizer to determine his three available actions, e.g., moving on a land route or a sea route. The player moves his figures, trying to reach spaces already occupied by the other players’ figures or the Ambassador. When­ figures are in the same space, the current player gets the right to “ask questions” and inspect some of the cards of that player. By deduction and a logical process of elimination, he can draw conclusions as to the identity and intentions of the other players.

The ­first goal of every agent is to discover which of the other players is his partner. This partner has the other half of the “code” indicating his secret mission. After discovering (or thinking he has discovered) the real identity of the other players, an agent must trade his secret mission card with his ally. This will reveal the final mission and what must be done to complete it. If either agent on a team completes the mission, both he and his partner win the game.

There is another character with an important role in the game: the Ambassador. He can be used to get clearer information about the other characters. Everyone wants to meet him because he is well-informed and can be useful to accomplish your purposes, but he can also help your rivals, so do everything you can to keep him far from them.”

The biggest change involves the movement.  The new changes improve the rules so that players have something useful to do each turn.  White balls no longer mean a lost movement but rather can be used as a wildcard for land/water movement.  Also, the purple marble now lets you move an opponent a space.  These subtle changes really do open up the possibilities on your turn.

The other change is in the number of players. The original version of the game was only playable for 3 or 4 players.  This new Ares version works for 3-5 players as someone can now take on the role of the Ambassador.

Between the new smaller form factor and the new rules, this version of the game is worth picking up! 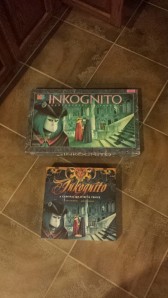