Corné van Moorsel of Cwali has a knack for producing unusual games. Probably best known for Factory Fun, his themes are highly varied from Subulata, a game about grasshoppers crossing water lilies, to Mondriaan 2020, an abstract about abstracts. Many tend to play relatively quickly and usually lend themselves well to 2 player games. He also uses neat bits like these pawns

from Smart in this photo from BGG by zefquaavius. If you haven’t guessed, I’m a huge Cwali fan.

Leelawadee is one of his most recent releases and follows the Cwali tradition. Leelawadee is a type of flower. In this game the goal is to plant new flowers in your garden which will attract butterflies. Each Leelawadee game is one of a kind since most of the bits were hand crafted and I believe there were a limited number of copies. The downside was this took a long time hence the delay for the KS games, but the pieces really add a nice touch to the game.

The handmade pieces include the flowers, butterflies and the my favorite, the roly poly bumble bee. 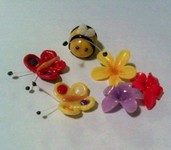 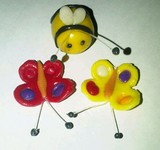 Game play is easy and for 2-4 players. Each player takes a garden board with 10 spots for planting flowers. The flowers are placed in the bag and randomly drawn out so there is enough for 2 flowers per player. Flowers are then selected “Settler’s style” one at a time. The first player picks then clockwise, then the last player picks twice and counterclockwise back to the the start player.

After each flower selection the gardens are checked to see if the newly placed flower attracts any butterflies of matching color or colors if 2 or more flowers are adjacent. This is the key to the game and is the most difficult part to understand intuitively.

The multicolored butterfly only moves when a garden has more colors in it than the current garden. 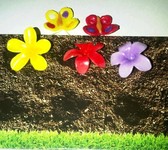 The bumble bee is attracted to the garden with the largest single color patch and scores negative points.

Players score the most points for newly attracted butterflies. Butterflies in the garden from a previous turn score half rounded down. As the game progresses the value of the butterflies increase per round. The game ends after 5 rounds and any garden missing one of the 5 colors of flowers loses 6 points.

So my thoughts on the game play? It has luck with random flower draws out of the bag. Since the flower distribution is not even there is a chance you may be doomed to losing 6 points depending on draws and turn order. The 6 points will not necessarily cost you the game. The play is really in figuring out how to be the last one to draw the butterflies to your garden earning the higher point values. You can score over 20 points in the 4th or 5th round, but in a short game with only 10 moves you have to be careful! You need to watch the other player’s gardens but since they are small and the flowers brightly colored it’s fairly easy to track.

I enjoyed the game as written and for 2 players it makes a quick filler, but it didn’t feel quite satisfying. I wanted a longer game with a few more choices. Since the KS succeeded with the extra goals, extra garden boards of different shapes were included but still with 10 planting spots. I proposed each player randomly picking a second board and placing it adjacent to the first. Then we used all the flowers. This succeeded in making the game a bit more strategic in that you could continue to make a large patch of like colored flowers or break it up into a few patches with the hopes of being able to earn more points from attracting the butterflies back. The problems I have with this idea is first the scoring system, which increases the value of the butterflies each round. I tried just repeating the scale from 1 to 5 for the second half but perhaps doing two rounds of each value would be better. The second concern is the multicolored butterfly which is optional to play with. Since it only moves to gardens with more different colored flowers, the first person to reach 5 colors will have a stronger advantage in a longer game. May be better to play without it. Anyway I’d be happy to hear anyone else’s thoughts on this.

1 Response to Leelawadee – First Impressions, stopping to smell the flowers