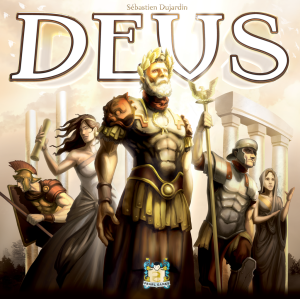 Deus is the newest release from Pearl Games, this one designed by the principal behind the company, Sebastian Dujardin.  I have been a fan of the previous designs of Sebastian, namely: Troyes, Tournay and La Venise du Nord.  As such, I have been waiting with much anticipation to learn about this newest release.  As he has in years past, Sebastian has been kind enough to let me look at a final proof of the rules to write up a preview for the blog in advance of the SPIEL fair.

In Deus, players  take on the role of a civilization leader – placing their pieces on the board to control the land as well as to attack barbarian villages.  The board itself is a modular affair – there are neat looking “rounded hex tiles” that are constructed out of seven teardrop-ish colored areas.  Each tile has 2 sea regions, 1 barbarian village and one each of the four different land terrains.  While I can’t confirm this until I see the actual bits – looking at the examples in the rules, it appears that each tile has a different arrangement of these seven areas.  The board is built by randomly placing the tiles together – the number of tiles used is determined by the number of players. The only restriction is that barbarian village areas may not be adjacent to each other. 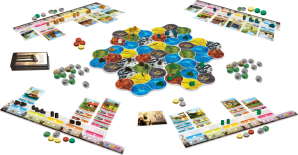 Each player gets a building board and two buildings of each of five types.  Each player has a total of 25 buildings in his color – 5 each of the five types – but at the start of the game, only 2 of each type are available to the player. Players also get 5 gold and one resource of each type to start.

Gameplay looks straightforward.  On your turn, you have a choice between two basic actions: A) Build a building or B) Make an offering to the Gods.

Regular Buildings – Play a card from your hand – pay the cost for it (either resources that match the cost on the card OR 4 gold per resource).  This card is placed at the top of the column of cards for that color on your player board.  (see picture)  Then you get to place a matching building (type based on the color of card played) onto the board. 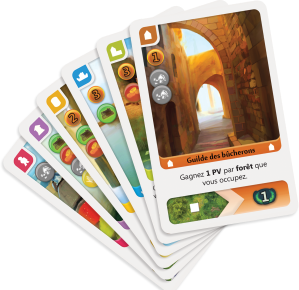 Building restrictions:  You must have a matching wooden piece available to build in your personal supply (or you may not play that card).  Initial placements must be on a region at the edge of the board, and later placements can either be in a region you already control OR a region adjacent to somewhere you already control.   You cannot place in barbarian regions.  Maritime buildings must be built in sea regions. If you place in a region you already control, you are limited to ONE building of each type in that region.  If you want to start a new chain of buildings (on a new edge region), you can pay 3 gold to do so.

Finally, you get the special effects of the cards – each card has something awesome on its bottom third.  You get the effects of ALL of the cards in the column you placed the card in, going from bottom to top.

Temples – the temples in the game are all of a neutral color – you play a temple card out of your hand, and the cost is always the same: one resource of each type, though again any or all resources can be replaced with 4 Gold each.  The first Temple gets placed in a notch in the player board at the right end.  When you build your second temple, you must first have built at least one card in each other color – and the Temple card will complete that row.  To build a third temple, you must then have at least two cards in each other color…  After paying the cost of the card, you then build a temple piece on the board – this must go into a region where you already have a piece though.

Once you have built your building, you check to see if it is time to fight the barbarians.   This happens if two criteria are met: A) A barbarian village is completely surrounded (all neighboring regions have player pieces in them) AND B) at least one military unit is amongst those pieces.  The player with the most military pieces around the barbarian village wins the VP bonus (which is equal to 1VP per region surrounding that particular village).

If, at the end of this turn, you have NO cards left in your hand, you may replenish your hand and draw back up to 5 cards.

MAKE AN OFFERING TO THE GODS

Instead of building, you can take this other action which allows you to discard cards.  You choose as many cards to discard as you like, and place them on the discard pile in a single stack – so that your opponents can only the topmost card.  Then, based on the color of the card on top, you get an action which is modified/repeated by the number of cards you just discarded.

After you take the special power of the God, draw back up to 5 cards – unless you took the Yellow action, and instead draw 2 cards per discarded card (to a max of 10)

Game ends when either all of the temples have been constructed OR when all of the barbarian villages have been attacked.  At that point, you finish the current round so that all players have the same number of turns.  If you build a temple, you still play the card, but you do not get to place a wooden temple on the board.

Points are added up:

My thoughts from reading the game

Wow – the rules are very straightforward and easy to digest. This game looks like it will be easy to make a play, but the trick here will be to figure out how to maximize the card effects.  Since you get to take advantage of all of the card effects of a particular color when you play a card, figuring out how to get the actions when you need them will be key.

From the graphics I have right now, I only can see about 10 of the cards (out of 96 total in the game) – there certainly seem to be a varied set of actions from amongst the cards in the rules/examples, and I can only assume this will be true of the full set. As discarding cards is a main feature of the game – as a way to get extra wooden buildings for later plays as well as for the particular actions of the gods – you’re going to get a chance to see a lot of cards in the game.  Figuring out which cards are worth keeping will likely be important.

This is moving close to the top of my most-anticipated games thus far –  it looks to be another solid game from Pearl Games!

Dale Yu is the Editor of the Opinionated Gamers. He can occasionally be found working as a volunteer administrator for BoardGameGeek, and he previously wrote for BoardGame News.
View all posts by Dale Yu →
This entry was posted in Essen 2014. Bookmark the permalink.