This week’s reviews look at the conjugation of dice games from Essen 2014.  There are a good number of dice games this year – and I’m slowly but surely making my way through that stack.  I will start the reviews this year with the games most similarly named.  Each uses a bunch of dice in different ways to achieve fun.

Cubo comes in a brightly colored small square box – I didn’t know much about it prior to arriving at Essen, but I did have a chance to see it at the Asmodee press event.  Why Asmodee?  As it turns out, they are distributing Queen Games now over there.  (As you might have heard, Asmodee is pretty much trying to take over the world – they have also recently acquired both Days of Wonder and Fantasy Flight Games).

In each of the six rounds of the game, players simultaneously roll their pool of 9 dice.  At this time, the four dice in the center of the table are also rolled.  Then, as quickly as they can, they try to arrange those dice into a 3×3 array (obviously, not changing the value of the dice from what was rolled).  The white die must always be placed in the center.  The goal is to create trips (three dice of the same value) or runs (three dice in ascending/descending numerical order) on either the columns or rows of the array.  If a player doesn’t like his numbers, he is welcome to re-roll ALL of his dice.

In any event, once a player feels that his arranging is done, he covers his dice up with a player mat and yells out “Cubo!”.  That player then gets to choose any of the dice from the center of the table and places it on top of said player mat.  All other players  continue to arrange their dice, and when they are done, they cover up their array and then choose from the dice remaining in the center of the table.  When there is only one player left to arrange dice, that player has to the count of 6 to get his dice into shape – otherwise they are simply randomly placed in the 3×3 grid.

This example would score 26 points

Once all players are done, the grids are revealed, and each player has the option to replace one of his red or blue dice in the array with the die which he took from the center.  The unused die (either from the array or taken from the center of the table) is returned to the center – this forms the pool of 4 dice for the next round.

Scoring is simple.  Each player looks at the three rows and three columns of his array and scores them.  There are three rules to scoring

Once you have tabulated your score, you take VP chits from the center board to match and the game continues.  Each successive round is played in the same fashion.  The only difference is that your pool of dice may slightly change depending on which color die you chose to take from the center.  After six rounds, the player with the most VP wins.

Cubo is a nice light game – quickly taught and quickly grokked by even the newbie gamer.  Rounds move by quickly, and honestly, I’m not sure that any of our 4p games has gone much past 15 minutes of actual playing time.  I have usually tried to do scoring individually for the first round or two so that all players can see how the scoring rules work, but then once folks are used to them, it is much easier and quicker to score simultaneously.

Is there a lot of strategy to the game?  Honestly, no.  But, there’s enough to keep you occupied for a filler.  The biggest decision points for me are: 1) after the initial roll, do I see enough numbers I like to stick with that set or do I want to immediately re-roll them?  And 2) Once I have figured out my array, what am I going to do with the die I take from the center.

As far as re-rolling goes, in our group, I’d probably recommend only thinking about doing this once at most.  The speed of the game is such that rolling more than that will likely not give you a lot of time to arrange your dice before the rest of the table is counting down from 6 to end the round!  Of course, this  could be group think on the part of our group – but there are many times when your dice fit into an easy pattern and you simply do it as quickly as possible to get the best die choice from the center.  Given the scoring rules, you can quickly see which high scoring opportunities you have (i.e. trips of at least 4 or runs that end 5 or 6).  I tend to make these first, and then I let the rest of the dice fall where they may.

To me, it’s not worth the time trying to figure out how to get a set of 1s to fit in when there are other arrangements that will yield me 4, 5, or 6 points (possibly doubled!).

You should always keep an eye out for the dice in the center as you could possibly replace one of your dice.  If there is a 5 or 6 there, especially of the right color, I might quickly throw the dice into the shape of a square to ensure that I get the dice I want from the center that will then score me 10 or 12 points.  (I’d say that a good round is 20+ points, so locking in 10-12 with the right die is usually worth it).

The other strategy that I’ve seen (almost) work is a slow-play one where you try to collect the same color die each turn so that you end up with all red (or all blue) for the final rounds.  While you might not score as well in the first rounds – when you are collecting a color – you will ensure that you pretty much score double for all scoring in the final two rounds – and if you’re rolling skills are good – this could pay off handsomely.

The components are nice, but somewhat un-necessary.  The game comes with the dice – which are all definitely necessary.  The cardboard covers to place on top of the dice are also a good way to show that you are done and prevent you from continuing to mentally arrange the dice or work on them after you have said you are done.  However, everything else in the box, the central board, the VP chits, etc are nice to have but not really necessary to the game.  My boys and I actually feel that this game is easier for us to score on paper (or a scoring app on one of our phones) than to grab the chits from the table.  However, I know that we may be in the minority here… For those that need/want the tactile chits – they are of thick high quality cardboard in bright colors. 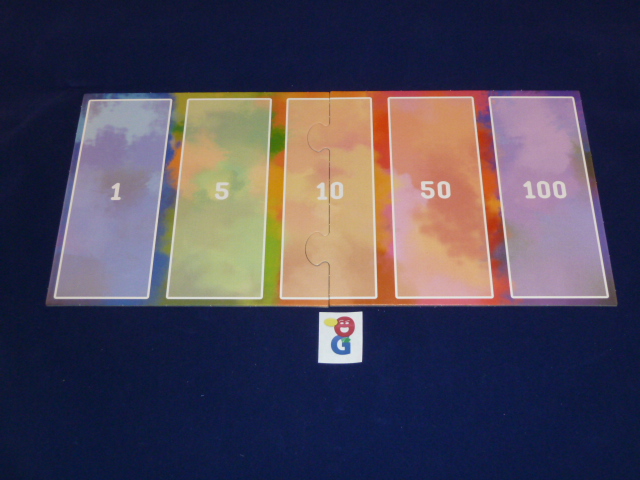 This is the whole board…

and the colorful but un-necessary scoring chits

This will never be the sort of game that we will build a game night around, but it is an enjoyable filler that can be pulled out and quickly explained/played.