Colt Express transports gamers back into the American Wild West with a gang of bandits planning to make a big heist on the Union Pacific Express.  There are coin purses, jewels and strongboxes scattered throughout the train, but they are protected by a Marshal on board.  Thematically, the story falls apart a little bit because the gang is not working together to steal the goods; each player is trying to steal the most valuable loot and therefore win the game!

The board in Colt Express is made up of nicely illustrated 3-D train cars. Naturally, there is a Locomotive at the head of the train, and then there are a number of train cars equal to the number of players behind it.  Each car starts the game with some loot (based on what is printed on the floor), and the Marshal and a Strongbox always start in the Locomotive.  Make a deck of cards with 4 randomly selected Round cards on top of a randomly drawn Station card.  These cards will determine the number and types of actions each round as well as any special scoring. 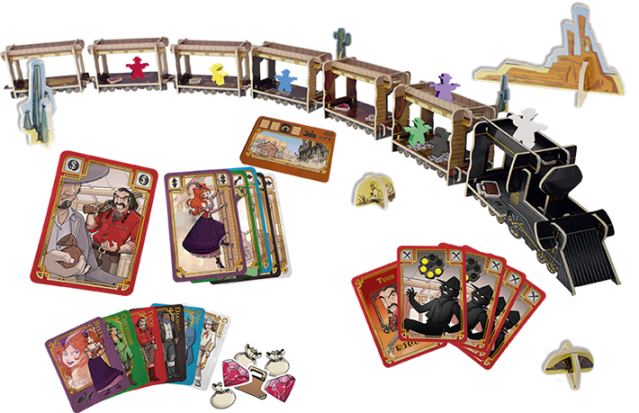 Finally, each player chooses which bandit he wants to be – and takes the appropriate player mat.  That character’s special ability is printed on the mat.  Then, everyone is given two decks of cards.  On the left of their mat, they get 6 Bullet cards – these represent your gun.  Each player also gets an identical deck of 10 Action cards.  They are placed on the right of the player mat.

The game is played over 5 rounds – there are 2 phases in each round: Schemin’ and Stealin’.  At the start of the round, the first thing to do is to flip over the top card of the Round deck.  This card will tell you how many turns will happen in this round and whether or not there are any special events.  Additionally, each player deals themselves a hand of 6 cards from their Action deck.

In the Schemin’ phase – players take turns in clockwise order.  You can either play cards from their hand into an Action stack in the center of the table (generally face up) OR you can choose to draw three cards from your Action Deck.  As I said, the cards are generally played face-up so that all players can see them.  However, some of the round cards may direct you to play specific cards face down, play two cards together at a time or might even change to order of play from clockwise to counter-clockwise.   The number of actions done in the phase is equal to the number of turns specified on the particular round card exposed at the start of the round.

Some of the pieces (courtesy of henk.rolleman on BGG)

You go through the entire Action stack, and then the Round ends when there are no more cards to be acted upon.  At the end of the round, each player takes all of his cards – the 10 Action cards that he started with plus any bullet cards he has accumulated, shuffles them and then deals himself a hand of 6 cards for the next round.  The next round starts by revealing the new Round card and play continues.

At the end of the fifth round, the game ends.  There is a single end-game bonus of $1000 paid out to the player who has shot the most bullets.  If there is a tie, all tied players get $1000.  Then, you add up the collected loot tokens and see who has the most money- that player is the winner!

The 3-D board is really neat – definitely a conversation piece.  Every time that I’ve taken it out, gamers have come around to ooh and aah about the bits.  Before your first game, make sure that you set aside 20 minutes though to do the initial construction!  The instructions for making the train cars are easy to follow,  but it is a fairly time intensive process.

The game is both strategic and chaotic.  At the start of each round, you have to see what cards you’ve been dealt and then formulate a plan.  Trying to guess what your opponents will do, in combination with the possible actions in your hand, will determine how you play your cards.  If you’re unhappy with your draw, you can always spend an action to draw cards.  Of course, this means that you will have one fewer action card in the stack this round – but you might need to sacrifice the action to get an action that you really want to perform.  If you’ve been unlucky to have been targeted a lot in the game, your hand may be full of bullets (which don’t do anything other than prevent you from drawing useful cards), you might have no choice but to draw at some point in the round.

The chaotic part of the game comes in when your carefully planned sequence of actions is derailed somehow.  This might be when someone punches you and you are moved to a car you didn’t expect to be in – or the Marshal is moved into your car and you were forced to flee onto the roof.  There aren’t any loot tokens on the roof of the train, so now unless you’ve already planned to change floors, you won’t be able to collect any loot this turn.

I’m not a theme guy – but there are two areas where the story of the game falls apart.  As I mentioned in the intro, it doesn’t seem likely in the Old West that a group of bandits would plan a Great Train Robbery and then spend half of their energies shooting each other and not working as a team.  Second, it seems weird that you can never shoot anyone in the same car/roof as yourself.  It’s not like they had laser sights in the 1800s…  Lucky for me, the game is a hoot and I don’t really care if the theme matches up.

Watching my kids play the game – I will say that it’s helpful to have thick skin.  While some of the attacks more targeted than others, odds are good that you will have at least one round where you don’t do much because your awesome plan has been disrupted by something you didn’t expect.  Or what’s worse is when you are expecting something to happen – like having the Marshal force you to the roof- and then this doesn’t happen… But you’ve already played a switch floor card and then you are obligated to climb up onto the roof of your own doing – and now your plan is screwed up!

With only 5 rounds in the game, it’s tough to watch yourself have 20% of the game go by with a destroyed plan – and my kids have definitely had a hard time dealing with this.  However, in true French tradition – this chaos usually spreads to all players, and it’s likely that all players will end up with a turn or two that is thrown into disarray.

There’s a bit more randomness and chaos than I’d prefer in a game, but the overall duration is short (30-40 minutes).  And even if you can’t pick up your own loot, it can be satisfying in its own way to score points by shooting everyone else and punching them – to pick up their loot and to hopefully screw up their plans in the process!

Dan Blum (1 play): I think this does what it does pretty well. However, what it does is something I’m not too interested in; it’s a very chaotic game with lots of screwage. Since it moves along quickly I’d be willing to play it occasionally but I would be fine if I never did again.

Craig Massey (4 plays): This is a game that has a high fun and silliness factor.  If you want to be serious and strategic, then you’re better off looking elsewhere.  But get into the spirit of the game and its very enjoyable.  It’s quick and does not overstay its welcome.  The different characters provide replayability and given the nature of the game, it is more fun with more players without adding to the play time.