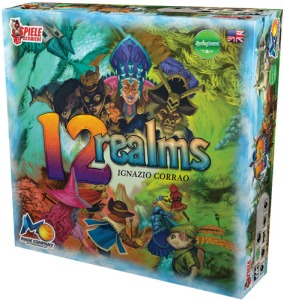 Cooperative games are all the rage, with seemingly a dozen or more released each year.  While there were a few cooperative games back in the 80s and 90s — most notably Scotland Yard  — the genre began gaining in popularity with the release of Reiner Knizia’s Lord of the Rings at the turn of the century.  From that point on, a steady stream of cooperative games has been released just about every year.  The themes have included everything from ghosts to firefighters and policemen to infectious diseases.

With the popularity of the television shows Grimm and Once Upon a Time, it should come as no surprise that the fairy tale theme has now been incorporated into a cooperative game.  12 Realms by Ignazio Corrao was originally released in 2010, but this year has seen the system enhanced with the release of numerous expansions.  As such, the game is once again receiving attention.

Set in a fantasy land populated by legions of evil creatures and characters, players assume the role of “good” fairy tale characters, including Snow White, Red Riding Hood, the Nutcracker and even the Sugar Plum Fairy.  Hmmm … not exactly the type of characters that inspire machismo in most gamers.  Still, these characters must unite to dispel the Dark Lords and their minions who threaten to subjugate the fantasy lands under their evil dominion. 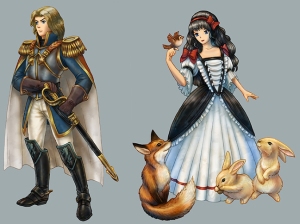 Each hero receives a player board upon which she will track her abilities and collect artifacts and items found during her adventures.  Each character begins with a set of skills — swiftness, combat, charm, magic, etc. — as well as a unique power or ability.  The realm is formed by combining several smaller boards, each representing a realm within the fantasy world.  Each realm, which is divided into six territories, has its own Dark Lord, associated minions, and artifacts.  The challenge is to defeat the Dark Lords in each of the regions before one of them advances his influence to the end of the track (20 spaces).

As with many cooperative games (Pandemic, Defenders of the Realm, etc.), each turn begins with the evil minions expanding.  This is done by drawing a number of Realm cards (2 per realm plus 1) and placing new invaders in the realms as indicated.  The actual territories within a realm where they are placed is determined by dice rolls … a lot of them.  This usually causes an abundance of new invaders to appear, often forcing players to alter their plans so they can deal with these new threats.  Before the cards are drawn, however, the invasion marker of each realm is advanced along the track a number of spaces equal to the number of invaders in that realm.  When the marker reaches the latter stages of the track, that realm’s Dark Lord appears.  If the marker reaches the end of the track–which is only a space or two beyond the appearance of the Dark Lord–evil has prevailed and the players are defeated. 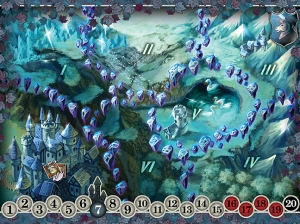 A player’s turn is usually quite quick and basic.  To move from territory to territory within a realm, a player must expend swiftness tokens.  Thus, she is only able to move as far as the number of swiftness tokens she possesses.  Once a token is expended, it may not be used again during that turn.  Moving into a new realm requires the player to be in the realm’s sole town, at which point she can transport to the town in a different realm.  However, her turn immediately ends.  This is extremely limiting, as without a special artifact or ability, a player is unable to assist in defeating invaders in other realms on the same turn.  This has proven to be quite restrictive and frustrating in the games I’ve played.

During a turn, a player may confront invaders, claim treasures or artifacts, trade with other players in the same territory, or even purchase items from the town.  Confronting invaders means expending the necessary tokens as indicated on the invader token (swords, charm, magic, etc.).  Some invaders are more difficult to defeat, and some require random dice rolls to determine what is needed.  Further, some have special powers that are enacted when they appear or are defeated.  Sometimes only certain characters have the necessary tokens or abilities to best them.  Of course, if that character is in a different realm, it may take awhile before she can arrive on the scene to be of assistance.

Treasures and artifacts appear in the realms at the initial set-up and when cards are revealed at the beginning of each turn.  Treasures grant characters gold coins, which can be used to purchase items when visiting the towns or, in some cases, defeat invaders.  Artifacts are needed to ultimately defeat the Dark Lords. There are three unique artifacts in each realm, and all three must be in the possession of one player in order to defeat that realm’s Dark Lord.  Each artifact requires the expenditure of specific tokens in order to be retrieved.  Many times only specific characters possess those abilities, and sometimes none do.  In this case, the missing abilities can only be acquired by obtaining specific items from the towns. 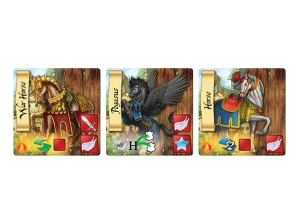 It is important to acquire various items at the towns.  To do so, a player must expend a swiftness token, draw two town cards, and purchase one.  The cost is in coins, with the more valuable items costing more.  These cards usually grant players special abilities or additional ability tokens, all of which are usually needed in order to ultimately acquire the needed artifacts and defeat the Dark Lords. Thus, consistently securing coins via treasures is an important task.

As mentioned, players must gather the three artifacts in order to defeat a realm’s Dark Lord.  These artifacts only appear when their cards surface, which due to the randomness of the draw could be late in the game.  A realm’s Dark Lord will only appear when the invasion marker (which advances each turn based on the number of invaders present in a realm) reaches space 16 or beyond on that realm’s 20-space invader track.  If the marker reaches space 20, all is lost. So, once the Dark Lord appears, there is usually only a turn–or at most two–to get the artifacts into the hands of one character, who must get to that realm and defeat the Dark Lord.  The restrictions on jumping from realm to realm only complicate this task.

After all players have completed their turns, all expended tokens are restored.  Thus, players begin each turn at full strength with all of their skills refreshed.  There is no “healing” or resting required.  Invasion markers are advanced and new Realm cards drawn to once again populate the board with more invaders.

A typical game will take 1 1/2 – 2 hours to complete.  All of our games have been tense, with defeat occurring more often than not.  That is a good feature of a cooperative game, as you want to always feel that tension of being on the verge of doom.  The game does a good job of forcing players to stamp out fires that occur each turn with the appearance of more and more invaders.  There is that constant feel of scurrying about the realms in an effort to keep the invaders at bay and delay the advancement of the invasion markers.  Only when all three artifacts appear and are acquired will the players want the Dark Lords to make their appearance.  However, that is largely based on the luck of the draw, which can prove quite frustrating.

There is some atmosphere to the game created by the unique Dark Lords and their associated minions.  The town cards also provide some flavor, with items ranging from magic chalices and Berserker axes to characters such as the Guild Thief and Golden Knight.  There is even a Flying Pig than can be used to transport a player to a different realm without losing the remainder of his turn.  This latter item can be extremely useful.

While the game has its strong points, there are some drawbacks.  The main one seems to be the difficulty in moving from realm-to-realm.  As mentioned, without the aid of a special ability or item, this can only be accomplished by moving from one town the next, after which the remainder of one’s turn is lost.  In a game that requires players to be able to move quickly around the board in order to combat ever-changing threats, this movement limitation is simply too restrictive.  The consequence is that many characters are destined to spend most, if not all of the game stuck in one realm.  This can and does prove limiting and frustrating.

The luck of the draw also plays a significant role.  The appearance of the invaders works well, but appearance–or non-appearance–of the artifacts can significantly affect the game and diminish the chances (and enjoyment) of the players.  I have experienced games wherein a key artifact or two do not appear until the Dark Lords are present, making it virtually impossible to acquire them and then reach the Dark Lord to do battle.  When there is no chance to win, it eliminates the fun.  A better method should have been devised to regulate the appearance of the artifacts.

The set-up instructions call for a specific number of boards based on the number of players.  What is perplexing is that this number doesn’t change when playing with 4 – 6 players.  It is extremely difficult to defeat all of the Dark Lords when playing with only four players, so some modification of these numbers seems in order.

There are advanced rules that add more elements to the game, some of which add flexibility and further options.  Expansions continue this trend, but only true fans of the game will likely feel the need to acquire them.

12 Realms is a noble effort at incorporating the fairy tale theme into the cooperative game environment.  It does have a similar feel as cooperative games such as Pandemic and Defenders of the Realm, but the cooperative aspect isn’t as strong as many characters tend to remain in one realm for most of the game and individual character powers are not as complimentary as in those other titles.  While there is a high level of tension, there is also a considerable frustration factor due to the realm-to-realm movement restrictions and luck-of-the-draw, which can stymie players’ efforts.  Fortunately, these two issues can likely be rectified with some house rules, which will hopefully make it more appealing and satisfying.

Greg Schloesser is the founder of the Westbank Gamers and co-founder of the East Tennessee Gamers. He is also a prolific reviewer of games and a regular contributor to numerous gaming publications and websites, including Counter, Knucklebones, Boardgame News, Boardgame Geek, Gamers Alliance and many others. Greg has been a gaming enthusiast his entire life, growing up in our hobby mainly on the war game side. His foray onto the internet exposed him to the wonderful world of German and European games and now nearly all of his gaming time is devoted to this area of our hobby. He travels to several gaming conventions each year and is the co-founder of Gulf Games, a regional gaming get-together held in the Southern USA. Greg was born in 1961 and lived his entire life in New Orleans before moving to East Tennessee in 2005. He is married and has one daughter (now married.)
View all posts by gschloesser →
This entry was posted in Reviews and tagged 12 Realms, cooperative game, Mage. Bookmark the permalink.