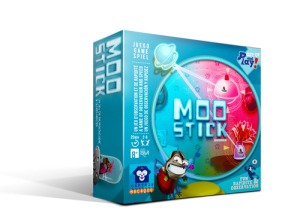 With last year release of Soqquadro, it looks like the idea of breaking the boundary of the box and use the whole house ad playing ground can be explored in many different ways. Sylvain and Olivier decided to implement it in a aliens themed game, wrapped in a small box with multilingual cards and rules. The idea is about finding, as quickly as possible, objects fulfilling the requests on two revealed cards.

Two cards (one green and one purple) are revealed and the player has to rice finding three different objects described by at least one of the two cards. To mark an object you have to put one of your three gluing saucer on it. When you have done you run back to your base (on the table) getting bonus point. Every player get as many points as the players still on race. So, in a 5 player game, the first one score 4, the second one 3 and so on. Then you check the marked objects: every object fulfilling the condition on one card score 1, on both card score 3. Than two new cards are revealed and a new mission start. After 5 missions the player with more point wins.

The game is quick and fun to play. The cards have simple requests like “it touch the ground” or “less then 5cm long” or “has more than 5 holes” or “has 5 letters” or “it contains an L”. The request are easier enough to make the game playable also by kids. The most funny thing, of course, is having players running around the room/house searching for objects. It is important to be quick but being able to find 2-3 objects fulfilling both the conditions is a real boost.
The alien/space theme is, obviously, useless and the cards’ requests are not related to it.

It is not possible to me to not compare Moos Stick with Soqquadro since the core mechanics are very similar.
Soqquadro is much more chaotic, since you have to grab and move the objects on the table and all the game is in real time. Moo Stick is a bit more calm with 5 rounds of 5 minutes each and awards not only for the quickness . The request on Soqquadro’s cards are more related to the name of the objects than in Moo Stick. Soqquadro’s box and materials are better but Moo Stick is fully multi-language and that is really nice if you play with people of different countries. In the end playing the two games you have different gaming experience and so, if you like the idea to run around the house looking for objects, you can try and enjoy both games. I was not sure of the life span of the gluing saucers but they seems to behave very well.

Andrea "Liga" Ligabue is a game expert contributing to many games related international projects including Gamers Alliance Report, WIN, ILSA Magazine and Boardgamenews. Member of the International Gamers Awards Committee is coordinator of Play - The Games Festival and founder of the project Ludoteca Ideale.
View all posts by Andrea "Liga" Ligabue →
This entry was posted in Essen 2015, Reviews and tagged Captain Macaque, moo Stick. Bookmark the permalink.