Liga: review of The Tower 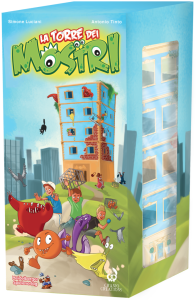 Simone Luciani is a well known designer with interesting titles published including the The Voyages of Marco Polo, winner this year of both IGA and DSP. Antonio Tinto was in the Acchitocca Team (Egizia and Leonardo da Vinci). For the first time they deal with a dexterity game and The Tower is the result.

Up to 4 players compete trying to quickly move wooden pawns from the top to the botton of the tower. 40 tokens, in 4 different shapes (triangle, square, circle and cross) are put in the tower from the roof, the hourglass is turned on and than the fight begin.

Every player get points for one different shape. Players have only one instrument to move pawns, though: their fingers! They put their fingers through the windows of the tower and push their pawns to the next level. The tower has two holes in every floor and the hole in one floor are on the opposite sides of the holes in the next one. Moving pawns down is not easy at all: the pawns are black and, of course, also the floor are black! You have to look from the windows but the windows are always occupied by other players’ fingers and, finally, you have to do that quickly. When the hourglass end the round stop. Now it is time to lift the tower and count the pawns reached the ground floor. One point for each pawn in your shape! The second (and the third round) operate in the same way but every player get a different shape to move. After three rounds the one with most point win.

It is The Tower fun to play ? Yes, it is funny to fight shoulder to shoulder trying to get your pawns and to move other players’ pawns in the corners of the tower. It is strategic ? I don’t think so. Of course you have to recognize quickly your pawns and move away others but the time is not enough to plan a strategy: you have just to move quickly. How long can you play it ? I think that, like most dexterity games, is nice to play The Tower sometimes. I think you can play 2-3 games in a row but it is not a game that can fill a full evening. On the other side it is nice has a quick filler. It works well with 2-3-4 players and it is nice both for kids and adults.
The Tower is already assembled and it looks quite strong: it is made of heavy cardboard and I think it can endure a lot.

Andrea "Liga" Ligabue is a game expert contributing to many games related international projects including Gamers Alliance Report, WIN, ILSA Magazine and Boardgamenews. Member of the International Gamers Awards Committee is coordinator of Play - The Games Festival and founder of the project Ludoteca Ideale.
View all posts by Andrea "Liga" Ligabue →
This entry was posted in Essen 2015, Reviews and tagged Antonio Tinto, cranio creations, simone luciani. Bookmark the permalink.