Andreas Seyfarth seemingly disappeared from the game scene after designing Manhattan and winning the 1994 Spiel des Jahres.  Then, in 2002, he released what is arguably his most influential game: Puerto Rico.  It was nominated for the Spiel des Jahres, but ultimately lost to Villa Paletti.  But in 2006, he teamed up with his wife — Karen Seyfarth — to design Thurn and Taxis, which took the red pöppel that year.

Andreas and Karen had met in the late 1970s, and he’s credited her family with giving him the gaming bug.  She introduced him to Hase und Igel in 1979, the year that game won the SdJ.  In a Geeklist that Andreas later created, he said if it hadn’t been for that game, he wouldn’t have met Karen, and his games wouldn’t exist.  He has said that she had a hand in all of his games, but the two co-designed 1991’s Max and Moritz and then later worked together on Thurn and Taxis.  As Andreas told one interviewer, many of the ideas in Thurn and Taxis came from Karen.

Thurn and Taxis is based on the Thurn and Taxis post, an early postal service in Bavaria and the surrounding regions started by the house of Thurn & Taxis.  The game incorporates many historical buildings and other historical aspects into the game board, and Andreas and Karen consulted with Peter Styra of the the Thurn and Taxis Museum and Archive for advice on the historical features of the game.  Historical facts are included in the rulebook with each game.

In awarding the game the 2006 Spiel des Jahres, the jury praised the game’s historical theme, easily-understood rules, and solid mix of luck and skill.  Thurn and Taxis garnered a nomination for the International Gamers Awards that year, and it placed second in Deutscher Spiele Preis voting.

Thurn and Taxis is still in print today.  The game has received three expansions:  Der Kurier der Fürstin (in Spielbox 2006), Power and Glory (2007), and All Roads Lead to Rome (2008).  Online play is available at Yucata.

In Thurn and Taxis, players are vying to build a postal system, and the winner will be the player with the most victory points at the end of the game.  Victory points are earned by building the best network of post offices, acquiring carriages, and collecting bonus tiles.  The game enters a final round when a player acquires a value 7 carriage or places all of his post offices.

Each player starts the game with 20 wooden houses (which represent post offices).  The goal is to collect city cards in order to place these houses on the game board, earning bonus tiles along the way.

On a player’s turn he takes the following actions in this order:

During the course of a player’s turn, he may use the support of one official, taking advantage of their special ability:

Taking city cards is straightforward.  A player can take one of the six face up city cards or the card on the top of the pile.  Cards taken face up are replaced with the top most card from the supply.

Playing cards is also straightforward.  Cards must be played in a row, and once played, their order in the row cannot be changed.  Cards played must be placed on either the left or the right of the existing row.  Most importantly, the route must be suitable, meaning that the new card placed must represent a city on the board that is directly adjacent to the city represented by the card it is placed next to.  Cities in the route cannot be used twice. 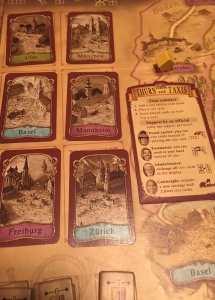 If a player is unable to play a card, his current route is discarded.

Lastly, a player can close and score his current route.  When doing this, he takes four steps:

When a player has the value 7 carriage or has placed his last house, that is the final round.  Scores are tallied: the value of the carriage, plus the sum of all bonus tiles, minus the number of unplaced houses.  The player with the highest score.

Does it stand the test of time?  My thoughts on the game…

I wasn’t looking forward to playing Thurn and Taxis: the theme seemed boring, the artwork looked bland (at least on the box), and I knew the hobby wasn’t as enthusiastic about it as some other SdJ winners.  Nonetheless, I was impressed by my first play, and more than 45 players later, I’m still enjoying it.

The beauty of Thurn and Taxis lies in its seamless and well-balanced integration of several familiar mechanics — card drafting, set collection, and route building.  There are numerous paths to victory, and you cannot focus on one element of the game and hope to win.  To top it all off, the game works well with 2, 3, or 4 players.

Some of the rules can seem a bit wonky at first, but the game is easy to visualize and understand when you actually play it, and most players — especially gamers — understand it with ease.  The rule book is only four pages, and the game can be learned in just a few minutes.  That said, Thurn and Taxis is on the heavier side for a Spiel des Jahres winner.  BGG gives it a weight of 2.3, and that seems fair: this is heavier than most other SdJ titles.  I never pull this out for non-gamers, and I wouldn’t use this game as a “gateway” game or play it with young kids: it is arguably too heavy for that.  But if you’re looking for the “next step” from Ticket to Ride, Thurn and Taxis is a good candidate.

Gameplay in Thurn and Taxis — like in a couple of other Seyfarth titles — is all about efficiency.  It is tempting to use the administrator (which lets you replace the six face-up cards), and inexperienced players mistakenly do so with regularity.  But to win, you’ve got to be primarily using the postmaster (take two city cards) and postal carrier (play two city cards).  And you’ve got to focus on getting the bonus tiles, which virtually always determine the winner.  Thurn and Taxis may appear to have a large amount of randomness, but I don’t think it does: the randomness that is there is easily managed.

Everybody I have introduced to this game has commented favorably, yet few ever request to play it again.  In the end, my biggest criticism of the Thurn and Taxis — and the criticism I’ve heard most from others — is that the game is a bit dry for the first few plays.  Player interactivity is low.  Nonetheless, the game, at least for me, gets better and better with each play.  I see new strategies, and my admiration for the inherent balance within the game grows.

Would Thurn and Taxis win the Spiel des Jahres today?  Maybe, but I doubt it.  It is arguably too heavy for the modern SdJ jury.  Broom Service won the KdJ this year with a weight rating of 2.4, just a notch above Thurn and Taxis.  Additionally, I think Thurn and Taxis would face stiff competition from the many medium-weight Euros being released each year, even if it compares favorably to many of today’s games.

Andrea “Liga” Ligabue: I have played Thurn end Taxis endless times, probably more than Puerto Rico. It was not easy for Andreas to design something that could arise over the Puerto Rico’s shadow, but he and Karen succeeded. Thurn und Taxis is a great game: probably too much complex for a SDJ (it will be an excellent Kennerspiel) that works fine from 2 to 4 players.

Patrick Brennan: (25 plays) Close observance of player pick up and avoidance of those areas seems to be the key, combined with good luck in getting cards in not-those-areas. The scoring seems to be overly weighted towards who gets luckier earlier in the game. But it’s a neat and simple premise – pick up cards, form chains, score. And that can be attractive if you’re looking for a 30-40 minute lightish affair with plenty to react to.

Joe Huber (22 plays): I agree entirely with Liga – today, Thurn und Taxis would win Kennerspiel.  It’s a fun game, that has aged reasonably well for me; I still enjoy playing it, even if it hasn’t risen to the level of an all-time classic for me.  Good game.

Dale Yu (>40 plays): The year that this came out, my group played the heck out of it.  Of course, that was back in the era when we were only getting 5-10 good new games a year, and everything got played more often than games today.  This was always one of the “classic” gateway games for me – unlike Chris W, I actually like using this one for introducing the hobby to new gamers.  It has a short playtime and gives newbies a good chance to look at a bunch of core mechanisms in Eurogames.  Is it a bit dry? Well, sure – but let’s face it, that’s true of a lot of Eurogames, especially those from this time.  Is is solid?  Definitely – you generally are working on your own routes with just enough indirect competition/blocking to not make it simultaneous solitaire.  I am also lifetime undefeated at this versus Leo, a record shared with Airships.  I do not think I have ever come close to beating him at PR though.

Greg S.:  As Dale says, I played this game quite a bit when it was first released.  Now, however, it only comes off the shelf every-other year or so … if that.  My enjoyment level hasn’t changed; it is just that there are FAR TOO MANY games being released each year and it takes every bit of gaming time I have just to keep up with the new releases.  Thurn & Taxis is an easy-to-learn game that is always challenging.  The theme isn’t terribly exciting, but nearly everyone to whom I have introduced it has enjoyed it.

Larry:  My first few plays of this were with 4 and it felt pretty random.  But then I played it with 2 and that’s how I think it really shines.  Much more control and much easier to play defense.

The theme seemed pretty unusual, so I did a little research and found the backstory to be very interesting.  It doesn’t surprise me that German gamers find the history represented by the design so compelling.

I don’t think I agree with the consensus that T&T is too heavy to win the SdJ today.  It’s certainly no heavier than Kingdom Builder.  Since I think the theme was such a big factor in the title winning the award in ‘06, I could see the same thing happening again a decade later, even if it’s a bit more involved than recent winners.  Maybe the game would find itself falling between the two awards, since it feels too light to be a serious contender for the Kennerspiel.

Mark Jackson (7 plays): I’ve never understood the love for this game… while it plays smoothly and there is a decent game there, I just find myself saying “so what?” at the end. Maybe it’s the theme… I don’t know. I have never felt the need to own it and won’t ask for it – but if everyone else wants to play, I won’t be a stick in the mud.