Review of Terra by Friedemann Friese

Back in 2008, Friedemann Friese (504, Power Grid) released Fauna, an animal-themed trivia game which garnered a nomination for the Spiel des Jahres.  In Fauna, players tried to guess the weight, length, height, and tail length of animals from around the globe.

Terra is Friedemann Friese’s sequel to Fauna.  Terra has much of Fauna’s gameplay DNA, but instead of focusing on animals, Terra looks at geography and landmarks.  Players identify – or guess – where the feature is on a map, how big it is, etc. But there’s a twist: being close counts, and in the end, you can take advantage of your friends who you think know the answer.

Terra received a German release last year, and Bezier Games released its English edition this year at Essen.  It will be available in game stores in late November or early December, or you can order it directly from Bezier Games.

Terra: The party game where being close counts…

Terra comes with a double-sided gameboard, with one side using Imperial (USA) measurements and the other using Metric measurements.  It also comes with 150 double-sided Terra cards, a box to hold the cards during gameplay, and 36 game markers (6 each in 6 colors).  Some of the Terra cards have a red border: these are particularly challenging and are intended for advanced players.

A game of Terra is played over six rounds, one card per round, and the player with the highest score at the end of the sixth round wins.  Although only six cards will be used, players place cards in the card box until it is full.  Cards are used front the front and discarded to the back.

The top of the card shows the information players get before they place their markers.  The bottom of the card is hidden since it contains the solution.  Players always get a topic, a photo, and three questions.  In the card below, the topic is the Terracotta Army, a photo is shown, and three questions are presented.  The subject will be in exactly one area on the map, and players also have to guess the year of discovery (green text means use the “year bar” on the board) and the number of soldiers in the army (orange text means use the “number bar”).  (There’s also blue text on some cards corresponding to the “length/distance bar”.)

A round proceeds as follows: the start player gets the card box and reads the information on the card.  The other players may then also look at the card, but they cannot remove it from the box.

Going clockwise, each player places one of his markers on the board, either in an unoccupied area or on an empty space on one of the bars.  Each player must place one marker per round.  After that, beginning with the start player, players may place another marker or pass.  Once you pass, you may not place any more markers for the round. 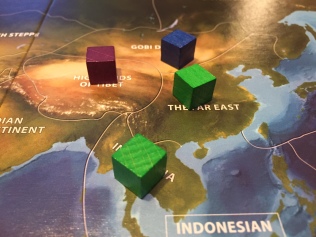 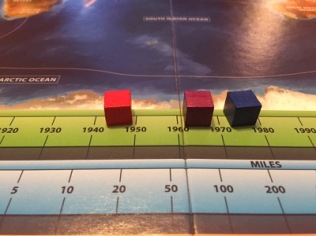 Incorrect answers are set aside next to the gameboard, and players get back one of their markers each time a new card is used.  However, all players will always keep at least three markers.

The start player rotates, a new card is drawn, and the next round starts.  The player with the highest score at the end of six rounds wins.  In the event of a tie, the tied players win.

I have really enjoyed Terra, and I like it better than its predecessor game, Fauna.  The beauty of both games is that you don’t necessarily have to be all that great at trivia to have a shot at winning: rather, you just have to know who at the table is good at trivia (or at least know who will have strong knowledge of a particular card).  Sure, the smarter player has a leg up, but being close counts.  Terra’s mechanisms make it a charming trivia game, or, as one mass-market Christmas list described it, Terra is a “more inclusive take on Trivial Pursuit.”

The topics on Terra’s cards are broad, making it feel like a more full fledged trivia game than Fauna.  Though there is a focus on geography and landmarks, other interesting trivia makes an appearance, giving the game a fun-but-educational feel that makes ideal for the whole family.  For example, you learn which country has the most national parks, the home of the most widely-spoken language (and the oldest known document in that language), and the country that consumes the most meat.

The production value on the Bezier Games edition is solid.  The map is beautiful, and the double-sided gameboard was a nice touch.  The game comes with a decent box insert, and the cards and components are high quality.  The rulebook is exceptionally well organized.

If you dislike trivia, Terra probably isn’t going to appeal to you.  And, if you dislike Fauna, odds are you aren’t going to like Terra either: it is largely the same game, even if there are a few minor rules changes. If you’re an animal lover, you’ll like Fauna better, but if like me you’re better at geography and landmarks, you’ll like Terra better.  That said, I think most people enjoy trivia on occasion, and Fauna/Terra are two of the best trivia games I own.

In the end, though, I think this game will have broad appeal, receiving support from both gamers and non-gamers alike.  Terra offers a great way to have a fun time and learn a few things along the way.  I suspect this game will be played at my family gathers for years to come.

Matt C.: I enjoyed Fauna immensely, but have yet to try Terra.  I could see enjoying that more, as I’d find the information a bit more interesting.  However, Fauna seems to be more attractive to a younger (kid) crowd.  Wits & Wagers is my go-to trivia game, especially for more raucous groups.  However, Fauna (and presumably Terra) is better for a more thoughtful or sedate crowd.

Erik Arneson: Fauna was a tremendous game (which would rate an “I love it!” from me), so I’m very much looking forward to playing Terra.

Dale Yu: My few plays of Terra have been loads of fun, and as Chris mentioned – it solves some of the issues with other trivia games because you don’t need to actually know the answers!  You can play the other players as much as you play the cards themselves.  My family loves Fauna, and in fact, I would say that my kids like Fauna better – but they’re in the stage of teenaged-ness where the animals are simply more interesting to them (and, they probably have a better chance of being able to make better educated guesses about animals than historical objects). I’m glad to have both in my collection, and I intend to keep both!

Fraser: We have an unplayed copy, which is probably a German language one since Melissa brought it back from Europe well before Essen (and all the family members with the exception of me speak German).  What Dale said, we love Fauna and I suspect that my kids will also prefer Fauna as their general knowledge is more geared toward animals than places of interest and geography.  If our copy is German I can guarantee we will pick up an English language one too.  I suspect I will rate it “I love it!”. once I get around to playing it.

This entry was posted in Essen 2015, Reviews and tagged Bezier Games, board games, friedemann friese, reviews. Bookmark the permalink.