I am not a crafty person…in either sense of the word.  What I am speaking of here is designing and making crafts.  Be it painting, sculpting, sewing, quilting or any other form of artistic craftwork, I have neither the talent nor the interest.  As such, a board game about making quilts and displaying them in quilt shows is quite likely one of the least appealing themes I can imagine.  However, I am sure there are legions of dedicated quilters who would feel differently.

Quite to my surprise, two games using the quilting theme were released last year:  Quilt Show and Patchwork.  As I have already reviewed the latter, this review will concentrate on Quilt Show, published by Rio Grande Games.

The game is designed by the married duo of Judy Martin and Steve Bennett.  Martin is an internationally renowned quilting designer and has authored over 20 books on the subject.  Conveniently, they are also both avid boardgamers.  So, it should come as no surprise that they have combined their two loves in their first published game.

In Quilt Show, players will acquire fabric cards that they ultimately turn into pattern blocks for their quilt creations.  A deck of cards represent a variety of different fabric colors, including single and dual colors, as well as a dozen dye goods, which can be used as any color.  Six are revealed into a face-up display.  Pattern blocks are depicted on the tiles, which are sorted by the six different patterns.  Interestingly, each type of pattern has a formal name within quilting circles, and these names are used in the game.  The top tile of each stack is revealed.  Depending upon the number of players, a specified number of time and prize markers are used.

Players each receive a player screen, behind which they hide their collection of pattern tiles, money and prize markers.  Initially players begin with a handful of fabric cards and three quilting chips (valued 1 – 3).  The quilting excitement begins.

Add fabric cards.  The player takes three fabric cards, either from the face-up display or the draw pile (or both).

Make Quilt blocks.  In order to take the quilt blocks, a player must use (discard) the corresponding number and color of fabric cards.  Each quilt block tile has a color and value (2, 3, or 5).  So, if a player wants to take a “Lakeshore Log Cabin” (blue) block depicting a value of 3, she must discard three blue (and/or wild) cards.  The block is placed behind the player’s screen, and a time marker is set beside the screen.  A player may acquire several quilt blocks in a turn, provided she has the necessary cards to do so.  However, new quilt blocks are not revealed until a player’s turn expires, so she cannot grab more than one of the same pattern per turn.

The object of taking quilting blocks is to ultimately craft attractive and prize-winning quilts.  Two main types of quilts are allowed:

Scrap Quilts.  These consist of the same pattern in any colors.  Duplicates are allowed.

Sampler Quilts.  These consist of the same color blocks, but different patterns.

Further, quilts can only be specific sizes, either rectangular or square.  So, players should acquire quilting blocks with these size and type restrictions in mind.

When the final time marker is taken (remember, one must be taken with each quilt block acquired), it is time for the real excitement to begin:  the quilt show.  A number of quilt show prize markers are revealed and sorted from largest to smallest.  Since these are drawn randomly from a large pool, the prize amounts will vary with each show. 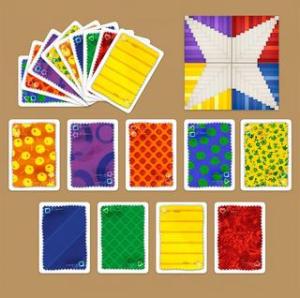 Players now decide on which quilt(s) they desire to enter into the show.  If desired, they may assign quilt chips to their entries, placing at most one chip on each quilt.  Once everyone is ready, the quilts are revealed and the award winners determined.  The value of each quilt is determined by adding the value of each quilt block in the quilt, as well as any quilt chip added to it.  All prizes are awarded (if possible), with the player taking a matching amount of money.  Any quilts not winning an award remain in place and will be reentered into the next show.  Prize-winning quilts are removed from the game, as they will be put on permanent display in the quilters’ households.

This process continues for three rounds, with a show being held at the conclusion of each round.  Any quilts that failed to win an award are sold for $1,000 each, after which players tally their winnings to determine the identity of the master quilter.

Quilt Show is a fairly basic, introductory-style game that may have appeal to folks who are not normally boardgame fans.  I say “may” because the theme will likely not entice many people beyond those who are interested in the quilting field or hobby.  I cannot imagine trying to get a bunch of my sports buddies to play it, even though football hall-of-famer Rosie Greer was a needlepoint hobbyist.  Alas, Rosie was the exception and not the norm.  As such, based on its theme, the game will likely have fairly limited appeal.

As a game, the components are sturdy, although a bit on the dull side.  Nice quilts are usually vibrant and colorful.  Here, the colors seem muted and the finished quilts are not very attractive.  I am not sure what could have been done to improve the components, but I am surprised that a game involving the creation of art wouldn’t be more eye-appealing.

There are familiar aspects in the game’s design that will be instantly recognizable by gamers.  The card drafting mechanism is a much used feature, as is the collection of cards to be used to purchase other items (in this case quilt blocks).  The assembling of the quilts to display in shows is certainly thematic and does present players with choices.  Do you concentrate on one or two larger quilts, which take time to assemble, in hopes of dominating your opponents come show time, or do you instead craft numerous smaller quilts in hopes of winning multiple awards, even if they are not the “best of the show”.  Sometimes it may be wiser to hold off entering one or more quilts, opting to continue adding to them and increasing their value.  Of course, your opponents may follow the same strategy, and you may well be forced to compete against several mega quilts.  Since the award prizes are determined randomly, one never knows whether the prize money at a later show will be generous or miserly.

Alas, the game has numerous problems that may be overlooked by novices, but will likely frustrate and annoy experienced gamers.  In order to purchase quilt blocks, the player must assemble the correct number and color of cards.  Players are often seeking specific patterns and/or colors, which may not appear when it is their turn, if ever.  Opponents may well grab those blocks on their turn, meaning you spent several turns acquiring the needed cards, only to never be able to use them on the tile or tiles you are seeking.  The same problem exists with the cards, as the colors one needs may not be available when it is your turn.  The problem is more acute here than in other card drafting games such as Ticket to Ride as there are tight restrictions on the blocks needed to form quilts.  This can be extremely frustrating.

The quilt block display can get clogged when the tiles atop the stacks are not those anyone is seeking.  This occurs more frequently than one might think.  There are no incentives for players to purchase tiles that they cannot use, as the display does not refill until after the player’s turn concludes.  Thus, taking an unneeded tile yields no benefits, and may well be beneficial to one’s opponents as new tiles are revealed.  Perhaps allowing the player to flush the quilt blocks on his turn would help, or make unused quilt blocks worth a bit of money at game’s end.  Or, perhaps a player could be allowed to spend money to examine the top three or four tiles and take one of those.  As is, the game can bog down too easily.

Many of the problems mentioned above could have been eliminated or mitigated with some rules changes or tweaks.  As is, Quilt Show, while having a theme that actually is somewhat evoked by game play, is a disappointment.  Game play is fine, although not terribly exciting.  It is serviceable, but the inherent problems will be evident to experienced gamers.  Viewed through the lens of a boardgame veteran, I believe the game could have benefitted from further development, which likely would have eliminated the problems and made for a better, more exciting game.  As is, I feel the same way about Quilt Show as I do about quilting.  ‘Nuff said.

Joe Huber (1 play): I’m really surprised Greg didn’t emphasize the similarity, but the mechanisms in Quilt Show are very similar, in feel, to Ticket to Ride.  They aren’t the same game – but anyone familiar with Ticket to Ride will have no issue picking up Quilt Show.  And, for that reason, I’m willing to believe that there’s an audience for the game among quilters – the game is approachable.  It’s also a reasonably enjoyable game – I didn’t see any issue with the level of development the game received, but instead found simply of less personal interest than Ticket to Ride.  If you enjoy quilting, I’d certainly give the game a try; others – need not try it, but can play it with their quilting friends without issue.

Greg Schloesser is the founder of the Westbank Gamers and co-founder of the East Tennessee Gamers. He is also a prolific reviewer of games and a regular contributor to numerous gaming publications and websites, including Counter, Knucklebones, Boardgame News, Boardgame Geek, Gamers Alliance and many others. Greg has been a gaming enthusiast his entire life, growing up in our hobby mainly on the war game side. His foray onto the internet exposed him to the wonderful world of German and European games and now nearly all of his gaming time is devoted to this area of our hobby. He travels to several gaming conventions each year and is the co-founder of Gulf Games, a regional gaming get-together held in the Southern USA. Greg was born in 1961 and lived his entire life in New Orleans before moving to East Tennessee in 2005. He is married and has one daughter (now married.)
View all posts by gschloesser →
This entry was posted in Reviews and tagged Judy Martin, Quilt Show, Rio Grande Games, Steve Bennett. Bookmark the permalink.