Ashes: Rise of the Phoenixborn 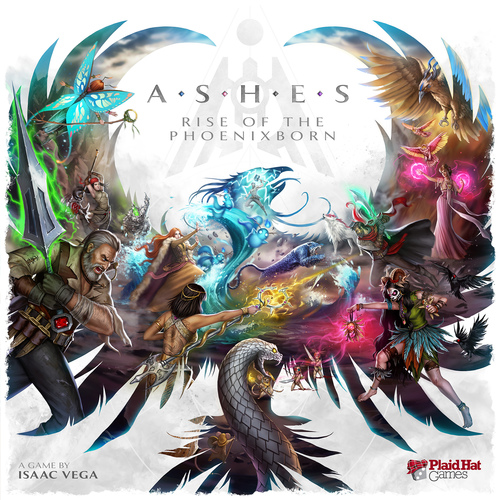 Ashes is a dueling game where players construct a deck of 30 cards to do battle against their opponent.  Each player is a Phoenixborn, a wizard/warrior who controls different units and casts spells – all found within their deck.  The Phoenixborn cards start on the table, and each player draws a hand of 5 cards from his deck to start the game.  Additionally, each player constructs a conjuration deck (the contents of this are dependent on which summoning spells are included in your main deck).

There are five different types of cards that can be included in your deck.  Action spells have specific actions as described on the bottom of the card.  Reaction spells are played in response to a specific situation (as outlined on the card).  Ally cards are played to the table are serve as units that can attack and defend in the battle.  Alteration cards modify other cards in the game and change the abilities of those cards.  Finally, Ready spells are special cards that are put into play (onto the Spellboard usually) and can then be activated in a later turn.

Examples of some of the cards

Each player also takes a supply of 10 dice and puts it near his deck.  During the course of the game, players may summon units to the table, and these units stand between the Phoenixborn and the opponent’s side.  As I said earlier, the game is a duel, and the game goes in a number of rounds until one of the Phoenixborn are eliminated.  The remaining Phoenixborn is the victor! 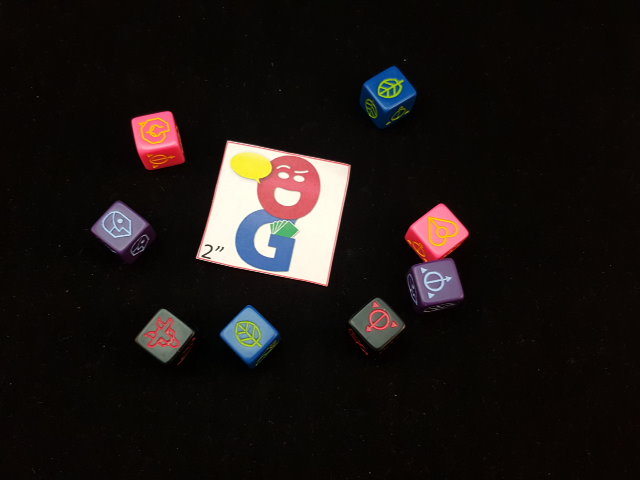 In each round, there are 3 different phases: 1) Preparation, 2) Player Turns, 3) Recovery.

In the Preparation phase, each player rolls any dice in their Exhausted pool and moves these dice to their Active pool.  Additionally, players are allowed to discard any number of cards from their hand.  Finally, each player draws back up to 5 cards.  If there are not enough cards in your deck to draw to 5, your Phoenixborn takes one point of damage for each card that could not be drawn.

In the Player Turns Phase – players alternate taking turns to take an action or pass.  This phase continues until all players pass in succession.  The main action choices are: activate a card, attack an opponent Phoenixborn or attack an opposing unit.  In addition to choosing one of these main actions, players can also take a side action: changing the faces of the dice, activating dice, or possibly activating a card.

Some cards require your entire main action to activate or play that card.  You will see an encircled star symbol on the card to show that this is necessary.  It may also be necessary to use some of your dice in order to use the abilities of a card.  If you do not have the right icons on the dice, you can always use a side action to change the dice to what you need.

When you attack a Phoenixborn, you declare which of your units are attacking.  The defending player can then declare up to 1 blocker for each attacking card – these blocking cards are moved directly in front of the attacking card that it will block.  The defender then decides which blocking cards will also counter the attack (as the blocker could simply block and not retaliate.)  All attacking cards and all countering defenders then deal damage to their opponent, and each of those cards gets an Exhaustion marker placed on them.  Cards with an Exhaustion token on them cannot attack, block or counter.  In addition, any text on that card does not have effect as long as the Exhausted token is on it.  Each unblocked attacker will deal damage directly to the Phoenixborn.

Arabel, one of the Phoenixborn

When you attack a particular unit, the method is similar with the exception that the Phoenixborn can serve as a guard and become the target of the attack instead.

Again, you get to take one of the above choices as a main action.  You also get the option of taking a side action each turn.  Some cards can be activated as a side action, these are noted with a star icon (without a circle),  You can also meditate which allows you to change the face of the dice in your Active pool – however, for each die that you modify, you must discard a card from your hand, from your Ready spell area or the top of your deck.  Finally, you could choose to use the dice to activate some specific actions.

Once a player has taken their main action and a possible side action, play passes to the next player.  Some turns may consist of only playing a card to the table.  The length of each round can vary.  Sometimes it doesn’t make sense to play the cards that you currently hold in your hand, and it may be more beneficial to pass or to just use the cards that have already been played to the table at that point.  Again, the round continues until all players in the game pass on consecutive turns. 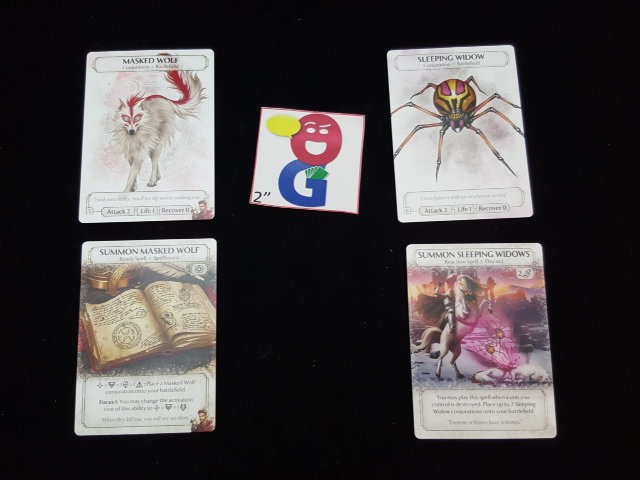 Ashes is a very nice self-contained game.  As it stands, you get over 240 cards in the box which allows you to build just about any sorts of decks that the players would want.  While I’m sure that there are some expansions coming down the road, at this time, you don’t need anything else for a full game experience.  Additionally, if you aren’t in the mood to sit down and figure out how to construct a deck, the rules have suggestions for starter decks for each of the six different Phoenixborn (as well as a suggestion for which dice to choose for that deck).

In our initial games, we have only played 2p games, and we have simply stayed with these prebuilt decks, and they have felt balanced against each other, and each has a slightly different feel and focus to the decks.  Certainly for your first few games, using these pre-built decks will allow you to concentrate on learning the mechanisms and flow of the game without having to also worry about choosing cards from a large pool of unfamiliar cards.

In our first games, the duels have been tight affairs with good back and forth attacking and defending.  Some of the decks are stronger with their units, and they can quickly summon multiple fighters onto the board.  This can be a successful strategy because if you attack with enough units, some will be able to get unblocked to the Phoenixborn.  Other decks have many powerful spells that get to your opponent without placing cards to the table. 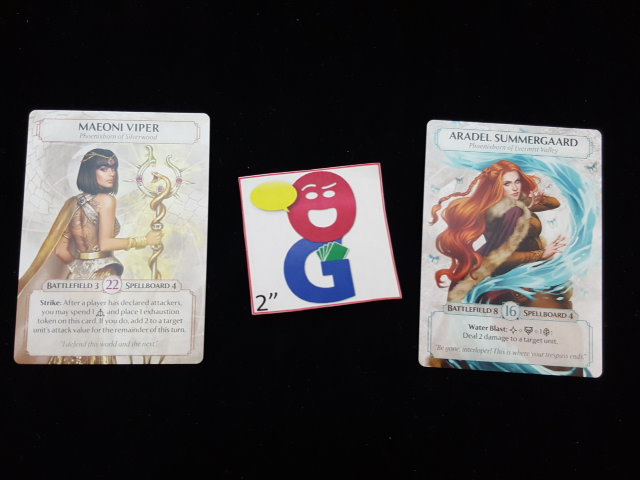 The phoenixborn from our first game

As I mentioned earlier, we’ve had a good time just working with the prebuilt decks, and after examining the cards, we’ve been able to pick out a few different strategies that could be employed with those cards.  As we have seen more of the cards, I can start to visualize how I might put different combinations together to form my own unique strategy.

The rules also outline some simple rules for a drafting system to choose the cards for your deck as well as the dice for your supply.  As I mentioned earlier, we have not explored this facet of the game, but the rules for the whole draft fit on a single page in the rulebook and seem to be quite straightforward.

An individual turn goes fairly quickly as there are generally only two actions (one main and one side) that are done on a given turn.  Early rounds can move quickly as players will initially play some cards from their hand and then use (exhaust) them in short order.  In later rounds, when players have more cards on the table, there are more possibilities for actions and activations.

I should also make some mention of the components.  The card stock is a fairly thick with a matte finish.  They shuffle well, and they have not shown any signs of wear with the play so far.  The art is absolutely fantastic.  Fernanda Suarez is listed as the artist, and her vibrant and lifelike illustrations definitely bring the game to life.  The scenery shots are well done, but it is the people in the game which really catch my eye.  The other thing that I noted was that the universe of Ashes is dominated by female characters. Four of the six Phoenixborn are ladies, and many of the other cards in the game also have women shown on them.  While it obviously doesn’t change gameplay in any way, it just seems to stand out for most other CCGs or battling games that seem to be more male dominated.

I feel that we’re ready to move into the next phase of this game – which is learning how to build our own decks/dice pools to develop and play our own strategies, but to be honest, even if we didn’t have that option, the game experience from just the starter decks has been an enjoyable one.

Dale Yu is the Editor of the Opinionated Gamers. He can occasionally be found working as a volunteer administrator for BoardGameGeek, and he previously wrote for BoardGame News.
View all posts by Dale Yu →
This entry was posted in Essen 2015, First Impressions. Bookmark the permalink.