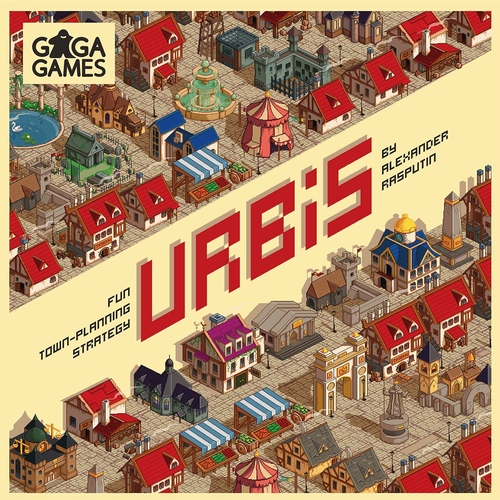 Gaga Games was a new exhibitor (at least new to me) at Spiel 2015 in Essen – one of a growing number of game companies coming out of Russia.  They had a bunch of new games, and Urbis caught my eye as it was touted as a 30-minute city building game; and this is a theme that has always interested me.

The story from the rules: “You’ve been given a unique opportunity to become a head of the magnificent city of Urbis. There is always a plenty of those who are eager to take this place, so when such a chance comes up, they’re ready to take it by all means.

The city of Urbis is ruled by the City Council elected by the residents. The main objective of the game is to become the Head of the Council. Like all the other players, you are a Council member who is responsible for the well-being and prosperity of the city. Each Council member (player) has an access to the city treasury and guard, and is obliged to follow the Council’s decreets. Each councillor is in charge of one of the city blocks (represented by a board given to each player in the beginning of the game) and aspires to develop his block either quickly or proficiently. Gold and silver from the treasury are distributed depending on the buildings that have been put up on the block. However the block residents are always on the lookout: no one wants to live close to the cemetery, gibbet or prison. Take thought for the residents, spend some money, and these grim buildings will appear on the neighbour’s block instead of your own. Hospital is also an essential city institution but it demands substantial charges to maintain. Taking this into account a player might awaken his inner dictator and build up his block with slums and honky-tonks, regardless of the residents’ needs, because the first player to fill all the building slots on his block becomes a winner. Which way is the best? To consider the block residents or to just execute the will of the Council? To turn your block into a dark place or a blooming garden? In Urbis you’ll have to make decisions promptly.”

In Urbis, each player is a budding city planner – and their section of the city is represented by a small board with 10 numbered blocks.  There are 50 building tiles in the game and they are shuffled into facedown stacks – you will use 10 buildings per player in the game (to a max of all 50) – they are placed in facedown stacks of 10.  There is also a deck of decree cards that are shuffled and placed face down.  Players start the game with 5 coins and 3 decree cards from the deck.  There is an income chart at the top of the player board, and each player starts with an income number that is equal to the number of players in the game.

some of the building tiles

On a turn, players can take one of five possible actions.

The game continues until one of the two endgame conditions is met.  First, if any player is able to fill all their building slots, that player immediately wins.  Note that it is possible to have more than 10 building slots as some of the decree cards provide extra building locations.  ALL locations, on the player mat and on decree cards, must be filled.  Second, if either the decree deck is empty OR there are no more buildings to be built – the game ends and scoring occurs.

Urbis is a very tactical game, and the building tiles (and their abilities) do give some sense of building a city.  The tiles themselves don’t interact with each other though, so in the end the city tiles are really just squares with VP annotations on them.

Money can be hard to come by, and I think that you need to pay close attention to this early in the game. If your income becomes too small, you can end up in a death spiral where you can’t earn enough money to place buildings where you want, and end up passing to only collect one or two coins each turn – this can be a frustrating fate in the game.

The Decree cards are a way to change the game rapidly, but the powers of the cards are very variable – some are quite good – possibly allowing you to earn 10 or 15 coins, which others are quite pedestrian.  Many of the cards are targeted, so this does cause a lot of “take that” play.

examples of the decree cards

In general, the best strategy might be to figure out how to draw the best cards from the deck because this seems to be the way to get the upper hand.  Alternatively, you could figure out how to randomly draw the building tiles that you need when you have the money to put them in the right place.

It’s hard to win by finishing your city because decree cards and buildings can be played on any player, and it seems like anytime that someone looks to take the upper hand, all the other players gang up on the perceived leader to bring him back down… that is until someone else then takes the lead, and then he bears the brunt of all the other bad cards.

Due to the variance in the Decree cards, the game is always in flux, and player’s fortunes can swing rapidly.  If you like take that style games, or games with widely swinging powers like Munchkin, this is probably right up your alley.  Games last 20-30 minutes once you know the rules, so even if you get hosed, it doesn’t take all night for it to happen.  If you’re looking for a city building simulation or a game that requires long term planning and building, this isn’t for you.

Dale Yu is the Editor of the Opinionated Gamers. He can occasionally be found working as a volunteer administrator for BoardGameGeek, and he previously wrote for BoardGame News.
View all posts by Dale Yu →
This entry was posted in Essen 2015, First Impressions. Bookmark the permalink.