In Gipfelsturmer, you try to lead your herd of billy goats to the top of the mountain in this dice rolling game. The board shows you the mountain with a starting area at the bottom and five eventually converging pathways leading to the summit. There are signposts on each pathway alerting you to what sort of dice roll is necessary to traverse that path. There are helpful upward arrows on the paths to show you which way to go. There are also a number of mountain streams with downward arrows that you might use to go the other way…

On your turn, you take the five dice and roll them. You can then choose to re-roll any dice to improve your situation. Then, because most dice games allow you to roll three times, you can once more choose to re-roll any dice you want. After that third roll though, you are stuck with the dice that you have. You now have to move one of your goats up the mountain. There are a number of different options as shown on the sign:

You are only allowed to move one goat upwards a single space – even if your dice roll would meet the criteria for multiple signs. If you are lucky enough to roll a five-of-a-kind, this can be used as a wild result for any sign. If you are unable to match the directions for any of your goats, you must then choose one of your goats to return to the starting area back at the bottom of the board.

Some of the spaces on the board have limited occupancy. In these spaces, you will see a one white goat on the border of the space – only one goat can be on this space. If you would move your goat onto this space, and it was occupied by a goat of a different color, the opponents goat would be pushed down the mountain via the neighboring stream. This could possibly cause a pushing chain reaction with multiple goats being pushed along streams down the hill.

However, pushing isn’t always bad!  If you move a goat onto a small space that already has your own goat on it, that goat gets moved up the mountain to the next space!  Also, if you move into a large space (one with unlimited capacity) that already has two of your goats in it, one of them gets pushed upwards into the next space…  (However, it is important to remember that if your goat starts a downward pushing cascade, and you have a goat that is affected down the line, that goat still goes down… not up). 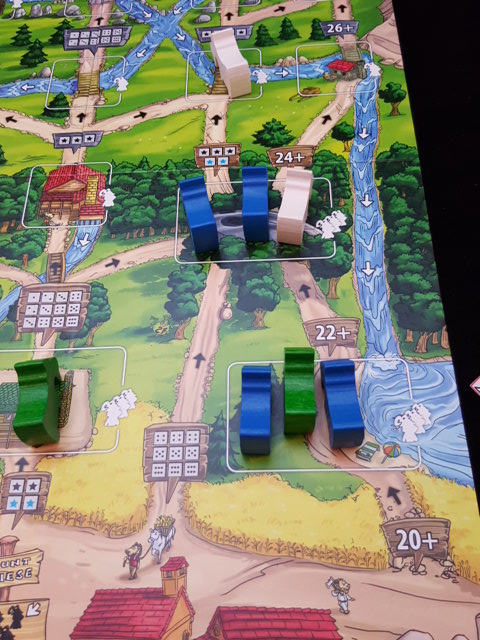 Here, you move a third goat into the lower space… 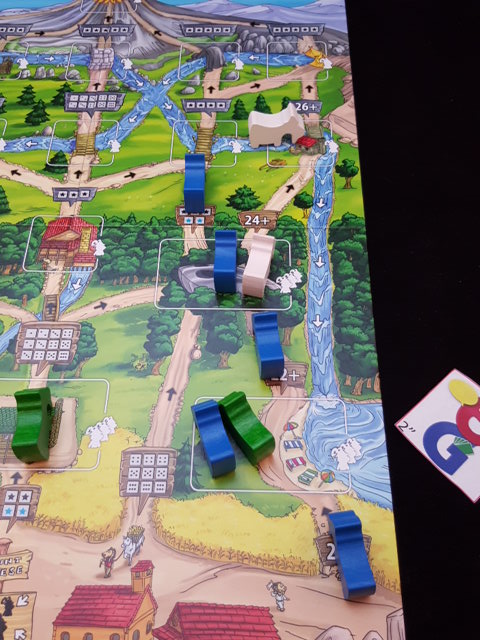 … and this chain reaction happens

Again, your goal is to get to the top of the mountain. Once you have a goat at the summit – you take you summit marker and place it in front of you. Your goat remains at the top until it is displaced by another goat – at which point it goes all the way back to the bottom. When you get your second goat to the top, you flip your marker over and you win!

Gipfelsturmer is a nice light family dice game. The rules are easy to teach, and even the youngest of gamers that I’ve introduced this to has been able to pick it up quickly. While the game seems very light at first glance, there is enough strategy involved – both in the re-rolling of the dice as well as choosing where to go on the board – to keep more experienced gamers happy.

As you play the game, I think you end up having to choose one of the three main paths up the mountain (left, right or middle) – because unless you are preternaturally good at rolling four- and five-of-a-kinds, you will end up moving up the mountain by pushing your goats, and the main way this happens is to have two goats permanently stationed in one of the three lower big areas.

I do wish that you had another goat or two in the supply to use because then you could legitimately try to move up two different main paths. With only 5 goats, if you want to have a consistent pushing presence, you have to put all of your eggs in one basket, and that gives you a little less flexibility in your play choice. As it stands now, I usually end up with four goats on one side of the mountain so that I can always be able to push up the mountain by either rolling what I need to get to the third level or simply rolling the combo for the second level and graduating a goat to the third level.

This strategy could lead to a lot of congestion and pushing as there are only three paths for four players, and you might want to try to aim for whichever side has less competition in order to keep your goats moving upwards. The game goes long enough that you might even have enough time to move you attack to a different path on the board to get away from other players. 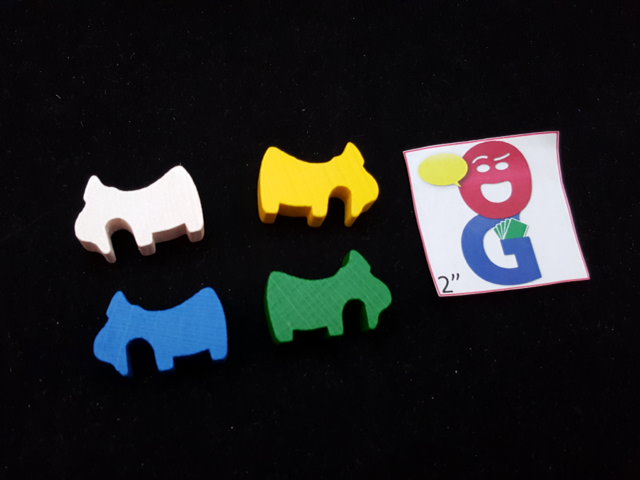 The length of the game is the only downside I see in the game. Moreso in a four player game than three – the constant congestion and concomitant knocking-down-of-goats can lead to a game that stalls in the endgame. Once someone is close to the summit for the second time, the game tends to slow down as all of the players will try to knock that player off of the next-to-last space on the climb. Sometimes this is a small setback, but if the chain underneath has been broken, this could represent a three or four turn effort to get back to the same situation. In the end, the game often runs about 10 minutes longer than I want it to because of this takedown-the-leader pattern. Of course, the best way to defeat this is to roll well, and roll a 5-of-a-kind when you need it

The artwork is definitely family friendly, though I have seen plenty of adult gamers pose the wooden goats in NSFW positions!  The rules are also simple to teach and grasp. This has been a big hit with the extended family, and it’s a good introduction to Eurogames.

Craig V:  Gipfelstürmer implements a quick, easy and fun game around the simple Yahtzee dice rolling mechanism. The large and brightly colored wooden goats really help bring this game alive and make it engaging. This is a nice family-style or introductory-level game. It also works well as a “filler” game when something lighter is needed. I really enjoyed playing Gipfelstürmer quite a bit regardless of its simplicity.

Dan Blum: I remember liking this when I played a prototype years ago. I’m not sure if the game changed or I just got jaded, but I don’t enjoy the published game as much. The flaws that Dale notes just make the game too long and too much of a repetitive grind for me.

Joe Huber (3 plays): I enjoyed Gipfelstürmer well enough, and would still be happy to play the game – but for me, it fell short of being a keeper.  I think the biggest issue for me is that it doesn’t provide the same level of excitement as other light dice games – and not enough decisions as to compete well with heavier dice games.  That said, it’s a sufficiently enjoyable game to be worth trying, particularly given the short playing time.

Doug Garrett (2 plays): Cute, chunky wooden sheep that look like scotty dogs is the best part about the game for Shelley and me.  It’s fun enough, but I’m not a huge fan of press your luck with dice games (Can’t Stop is enough for me, and I don’t even own that).  It has left the collection, though I’d be willing to play it again as an end of the night closer/filler.