Brain Games is a firm out of Latvia that I have come across in previous trips to Essen – Game of Trains and Dig Mars were two surprising finds from last year’s fair. This year at GenCon (2016), Brain Games made an appearance here with a new dexterity game, Ice Cool. There was definitely a high amount of buzz about this one – partly because they had a huge display in the press room – and it was the first new game that many of us in the press saw at the show – as well as the buzz created by any game which is hard-to-find. There were not many copies of the game available, and that seemed to only magnify the desire of people to acquire the game. Oh, and the folks at BGG really liked it, and that never seems to hurt either.

In this game, each player is a penguin student, running around the halls of their school – well, everyone but one player – because someone needs to be the hall monitor. The school is made up of five cardboard boxes which all cleverly nest within each other to store in a compact single box.

The box on its own

Now, the playing surface. Box top for scale on right

The boxes are held together with a few neutral colored clips. There are doors between the rooms, created by matching up the holes in the sides of the boxes. On a few of these doorways, you will find fish icons. Each player gets a student ID in his color as well as a color reminder card. There is a big deck of fish cards – each card worth 1, 2 or 3 points – and these are shuffled to form a face-down deck. 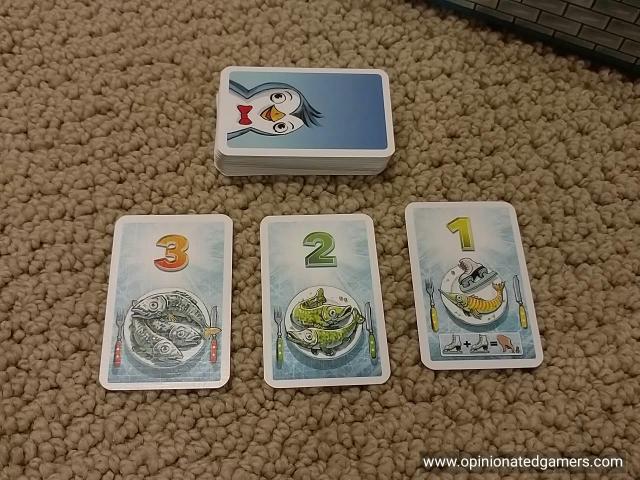 In each round, one player is the hall monitor – that player always starts in the kitchen room – anywhere within the red border. All the other players are called Runners, and they will start on the red dot in the Classroom. Each runner takes a fish clip in his color and places it over the three doorways marked with the fish icon. Then, in clockwise order, each player takes a turn.

Again, you always start a round from the red dot in the classroom – but after that, you start your next turn from wherever your penguin came to rest from the previous turn. On any turn, you move your penguin by flicking it one time. You can make the penguin move mostly straight by hitting it head on. You can also make the penguin turn by flicking it on the side you want it to turn towards. Of course, the tightness of the turn is dependent on both the strength and location of the flick. You can also flick down on the head of the penguin to make it jump over the walls and into another room! 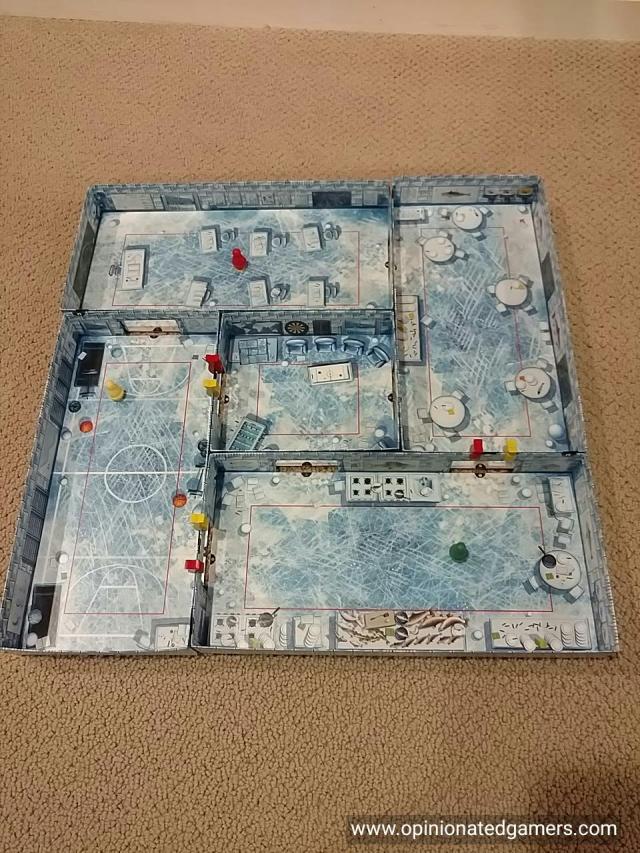 The green penguin at bottom is hall monitor. The red penguin upper left is in the starting spot.

There are some freaking amazing shots that can be made with the wobbly penguins. As I’m not a video guy (oh, and I’m pretty not good at flicking the penguins yet) – I will not show my own video. However, the promotional video on youtube from the publisher is worth checking out!  You can also see the box-in-a-box setup here too…

But back to the game. So, each runner gets to start the round from the red dot and move around the school. They are trying to move their penguins through each of the three doorways which they have fish clips above. Each time that they successfully move entirely through a fish covered doorway, they collect the token in their color. Note that you have to go thru the door – no fish are gained if you jump OVER the door!  Each time that you collect a fish token, you also draw the top card off the fish deck. The number on the card (1, 2 or 3) is its worth in victory points. Keep the cards face down so that your scoring total is secret from the other players.

Remember that you only get one chance to move your penguin each turn. The hall monitor also moves by flicking, but his goal is to catch the runners – that is, physically hit the other penguins with his own. If the hall monitor catches a runner, he takes their student ID card and holds onto it. A runner can also catch himself is he is clumsy enough to flick himself into the hall monitor!  The caught runner is not out of the round though – he continues to play (that is move around and try to collect fish) until the round ends.

At any point in your turn (whether you are the hall monitor or a runner), you can expose a pair of 1-point fish cards to immediately take another flick after the end of your turn. There is no limit to the number of extra flicks you can take so long as you have enough pairs of 1s.

The round ends when one of two things happen: when any runner has collected all three of his fish tokens OR when the hall monitor has caught all of the runners. At this point, there is some end-of-round scoring; each player gets to draw one fish card for each student ID that he holds at that time. (This is the main way that the hall monitor gets fish cards…)

Everyone takes back their ID cards, the next player clockwise becomes the hall monitor, and the fish tokens of the runners in this round are placed over the appropriate doorways…  You play an equal number of rounds to the number of players – that is, each player gets to be hall monitor once. At the end of the game, all players reveal their fish cards, and the player with the most points on their cards wins. Note that you still score points for the revealed pairs of “1” cards – you only revealed them so that you could not use them for multiple extra moves…  If there is a tie, the player with the most scoring cards breaks the tie.

Ice Cool is a super fun dexterity game that does bring a few new tricks to the game table. First, the box-in-a-box idea is super sweet, and definitely a conversation starter. Second, the wobbly penguins really do move around the boxes well, and with some practice, you can actually get them to do a lot of amazing things.

I think that it’s good that the players will learn over time to make better shots with the penguins, because otherwise the game doesn’t change. In every round of Ice Cool, the hall monitor always starts in the same room, the runners always start on the same red spot, and the fish tokens are always over the same doorways. (And yes, the boxes that form the school are always in the same configuration…)  In our first three games, I thought that the game might get old because it seemed like the strategies wouldn’t change much given the fixed starting positions. However, as we have all gained more experience in flicking and maneuvering the penguins (though not anywhere close to the skill seen in the Brain Games video) – you have a lot more options in how and where you will move around the school.

All of the boxes stacked upside down

In general, you’ll score more points if you draw more fish cards – but in the end, you’d rather just be lucky and draw more 3 point cards. The use of a pair of 1s as an extra move is a nice catch-up mechanic, and it might help you end a round early or escape the hall monitor at a crucial moment.

The rounds move by quickly, and my boys have asked to modify our games here to two times around the board. The extra turn seems to even out the fish card variance, and it also just gives you more chances to make awesome trick shots with the penguins…

I am projecting this to be a big hit at Essen – based on its BGG entry – there are already a number of co-publishers signed up for this (AMIGO, Gen-X, Lautapelit, Swan Panasia, Lifestyle, SD, etc), which means that gamers all around the world will have easy access to this fun flicking game.

Here’s how tight they pack

Nathan Beeler: Oh, those pesky high school hall monitors. Always sliding into you, taking your student id, and stealing your fish. Those were the days. And now we get to relive them, right down to the ice floors and the fish clips that held the school together. But I kid. This is actually quite a cute little game, and even in my few plays there were a couple really amazing shots for everyone to oooh and aaah over (certainly accidental, but they looked good). Dale’s right about the box, too. I always have a fondness for games where you play in the game box itself. This takes that concept to a new extreme. Overall, I don’t know if it’s one I need to buy — all my gaming time is still spent perfecting my z-ball techniques, after all. But I’d be happy to play when someone busts it out.

Dan Blum: I feel much the same as Nate. I’d definitely play it more, but I am not sure I will buy it. On the other hand I am not a huge dexterity game fan – if I played dexterity games more I would probably want it.

Eric Edens:  This game is a lot of fun on the table. It really is eye catching and anyone not playing will want to see what the fuss is all about. The trick shots are hard to do but satisfying when they happen. The issue here for me and for most party and dexterity games like this is the scoring. I would be more interested in a trick shot challenge with players judging and scoring other players shots more than the in the box score system. But even still the game is fun and will be a big hit. I like it but I’ll hope a friend buys it instead of me.