Posted on November 1, 2016 by gschloesser

Many years ago I had the opportunity to play Peter Dawes’ excellent prototype Heads of State.  I was completely enthralled by the game and couldn’t wait for it to be published.  Unfortunately, the published version differed from the prototype, and for me, the changes not only did not improve the game, but diminished the fun, as well as my excitement.  I was disappointed.

The game was later revamped and simplified into Royals.  While initially skeptical over a distilled version, I was pleasantly surprised at how much better and enjoyable the game is in this new edition.  It plays much faster, is easier to understand and flows seamlessly.

Set in Europe in the tumultuous 17th century, players assume the roles of powerful noble houses vying for power and supremacy.  Players will draft cards and use them to take control of influential positions in the noble houses and governments of the major European powers (Britain, Germanic States, France and Spain).  Power is not guaranteed, however, as influence can change quickly and dramatically. 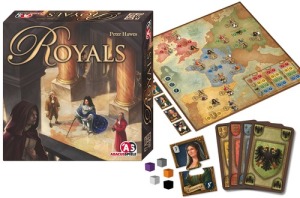 The board depicts 17th century Europe divided into the four aforementioned countries.  Each country depicts 3 – 5 cities, each with one or two titles or positions.  In total there are seven titles:  king, princess, cardinal, duke, countess, baron and marshal.  Players will vie to control these positions in the various cities and countries.  A supply of city and country bonuses markers are placed on the board, one by each city and two for each country.  Capturing these will earn the player victory points.

Drawing Cards.  The player may draw three “Country” cards from either the face-up display of three cards or the face-down deck.  These cards simply depict the country to which they are associated.  The objective is to collect sets of these cards in order to place influence markers.

Alternatively, the player may take one Country card and one “Intrigue” card, the latter being taken from the face-down deck.  Intrigue cards each depict two different countries and are used to oust an opponent from a position.

Playing Cards.  Each position requires a certain number of Country cards to occupy, with the higher positions requiring the most.  This amount is clearly listed beside the position.  For example, taking control of a vacant countess position requires three Country cards of the respective country, while controlling the king requires a hefty eight Country cards.  It usually takes several turns to collect the required number of cards, especially when vying for the more prestigious offices.

It is important to note that any three country cards can be played as a wild card, which helps mitigate the luck of the draw factor.

After playing the required number of cards, the player places one of his markers on the office.  He then takes the City bonus marker located by that office.  The values on these markers are victory points and range from 1–5.  Only the first player to occupy an office gets the associated marker.

If a position is already occupied, in addition to the required number of Country cards, the player must play one Intrigue card (two if attempting to takeover a king position) of the matching country.  When done, the opposing player’s marker is set aside by the city and the player places his marker on the position.  As with Country cards, a player may use any two Intrigue cards as a wild card.

When the deck of Country cards expires, the game is interrupted for a Period scoring.  Each country is examined to see which players control the most influence.  Each office grants a specified amount of influence, with the higher offices conveying more.  The top two players in a country earn victory point markers, which vary in points from 3–10.  Further, the amounts awarded vary with each of the three periods.  These points can be significant and should not be overlooked.

There are numerous other ways to earn points.  The first two players to occupy all cities in a country receive the Country bonus tokens, with more points awarded to the player being the first to accomplish this task. Further, every time a player occupies a position, he places a marker on the corresponding Title / Position tile, which are set beside the board.  At the end of the game, the player with the most markers on a title receives that tile and the indicated number of victory points, which ranges from 4–16.  If two players tie for the most markers on a tile, the tile is divided between the two, earning half points (the tiles are cleverly split to allow for this occurrence).  Finally, the first three players to have markers on all seven Title tiles receive the Noble House bonus markers, which range from 8–16.  Again, these scoring opportunities should not be ignored.

The game concludes after the Country deck expires for the third time.  The final Period scoring is conducted, after which the Title tiles are awarded as described above.  Players then tally all of their markers and tiles to determine the winner, who dominates Europe … at least until the next war!

After the disappointment I experienced with the initial release of Heads of State with its unfortunate adjustments, I am now back on the bandwagon with Royals.  I enjoy this streamlined version and the swiftness and ease of play that has resulted.  The game is easy to understand and plays swiftly with virtually no downtime.  The board—although a bit muted color-wise–is uncluttered and easy to decipher.  Everything seems well planned and designed.

The only caution is that players must be vigilant, keeping an eye on the Title tiles and countries.  It is easy for a player to fly under the radar and surprise everyone by achieving a country or Title bonus.

The multiple ways of scoring gives players numerous targets at which to aim.  However, the game situation can often change one’s plans, as sometimes players will adjust their targets in order to gain a majority in a country or Title tile.  The game begins to take an aggressive turn shortly after players begin drawing Intrigue cards, which is a harbinger of impending takeover moves.  There is no defense against these moves, something which I normally abhor.  However, it is less troublesome here, and I have found that the best defense is an aggressive offense.

Some folks will certainly take issue with the luck of the draw, as this can definitely affect one’s plans, sometimes forcing players to concentrate on a different country than initially planned.  The “wild card” rules help mitigate this somewhat.  I personally don’t mind the luck of the draw factor, as I enjoy the occasional “change of plans” it forces upon the players.

Royals is a fine game that is easily accessible and plays quickly.  Games are always tense and the outcome is usually in doubt until the finish.  It may lack the depth of the original Heads of State (prototype version, that is), but it is a solid, mid-weight game that I am happy to own and play.

Patrick Brennan: The card drafting to place your meeples on the board is straight Web Of Power. You want to get your meeples out asap to begin with to collect bonus chits for being the first to be in each area, or the first to complete each area – straight from Thurn und Taxis. Once they’re gone, it’s a matter of accumulating cards to your hand limit and playing them all out just before the round ends to usurp positions on the board to gain first/second in the various area majority bonuses. With competent players, the scores should be bunched, and we found this late-game usurping to be king-makery. Also, the AP at the end to eke out your best final points is too much for what’s otherwise a light mechanic (ie the card draw dependency) – in effect we just laid out all the cards and worked out the best options for each player to choose between. I also wasn’t a fan of having to wait for each player to decide (after each card draw) whether they were playing to the table or not (“done”), much preferring end-turn card draw to avoid mid-turn analysis requirements, and allow the card draw to signify end of turn, like most games do. So it doesn’t quite hit the mark for a family game, and it has some issues for gamers. Otherwise, borrowing so heavily from other solid games as it does means it in turn is quite solid, providing a vehicle for decent engagement and I have enjoyed my playings of it. But unashamedly it has two feet clamped in the themeless, soulless Euro camp.

Doug Garrett: (2 plays) We enjoyed our 2 plays of this, and it still has a place on our shelf, but I’m with Mark that Web of Power/China scratches this itch. I do like that it plays fairly well as a 2-player game (something that isn’t easy with Web of Power).

Larry: (2 plays)  Played this a couple of times and found it to be short, snappy, and enjoyable.  If someone in my group owned it, I’d be happy to play it again, but no one does, and with a plethora of games available, I haven’t bothered to seek it out.  Still, I consider it a good game and a successful streamlining of Heads of State.

Greg Schloesser is the founder of the Westbank Gamers and co-founder of the East Tennessee Gamers. He is also a prolific reviewer of games and a regular contributor to numerous gaming publications and websites, including Counter, Knucklebones, Boardgame News, Boardgame Geek, Gamers Alliance and many others. Greg has been a gaming enthusiast his entire life, growing up in our hobby mainly on the war game side. His foray onto the internet exposed him to the wonderful world of German and European games and now nearly all of his gaming time is devoted to this area of our hobby. He travels to several gaming conventions each year and is the co-founder of Gulf Games, a regional gaming get-together held in the Southern USA. Greg was born in 1961 and lived his entire life in New Orleans before moving to East Tennessee in 2005. He is married and has one daughter (now married.)
View all posts by gschloesser →
This entry was posted in Reviews and tagged Abacusspiele, Peter Hawes, Royals. Bookmark the permalink.