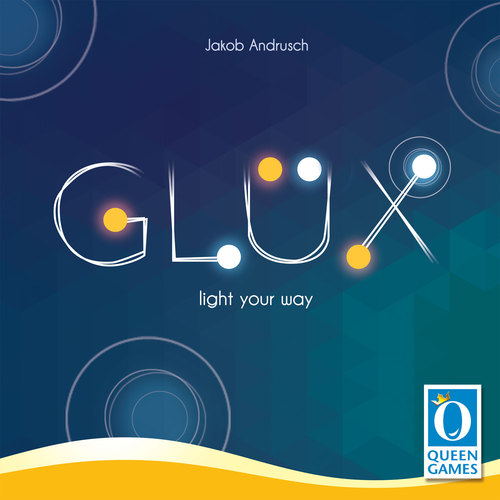 Glux is a nice light abstract game from Queen.  I honestly didn’t know much about this game prior to the show as Queen is usually pretty close to the vest with information about their games until the actual release date.  I did manage to take in a quick demo at one of the Queen booths at the show.

The board is a simple affair with a grid superimposed over a dark blue background interspersed with light blue “rooms”.  In a four player game, each player starts out with a start marker in a room in a corner of the board.  Each player has a cloth bag filled with 24 chips (marked either 6/1, 5/2, or 4/3 on the two sides).  The chips are shuffled in the bag and one is drawn at random by each player.  Simultaneously, each player decides which side of their drawn chip they want face up on their start token; all the initial chips are placed on their respective start chip.  Then, each player draws another chip and then keeps it secret in his hand. 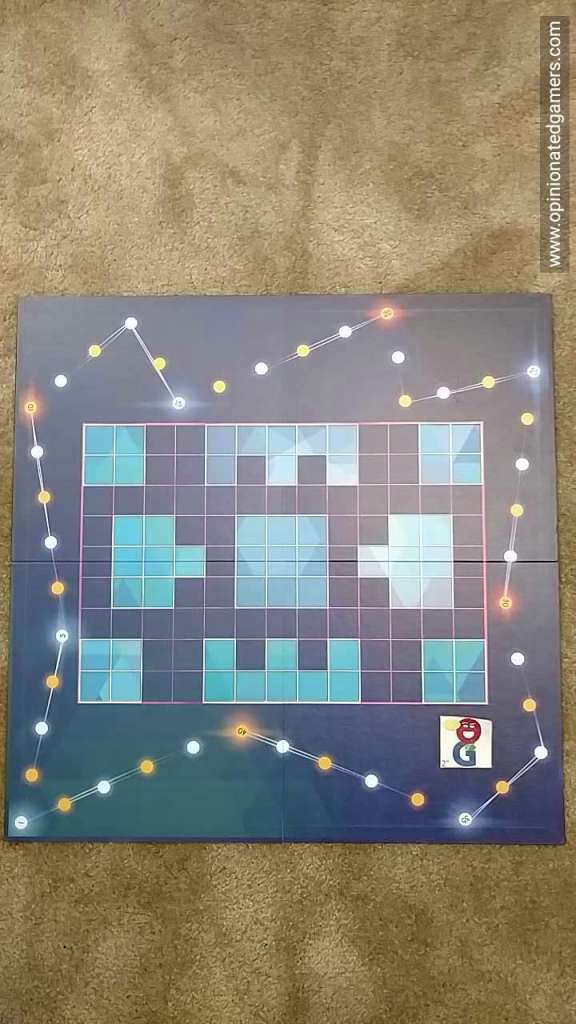 On a turn, the active player will place the chip that they are holding in a legal place.  Then, a new chip is drawn from the bag to prepare for the next turn.  If a player is unable to legally place the chip that he holds, he will no longer be able to place chips for the rest of the game.  The game ends when either all players are unable to play any more chips (because there are no legal places left on the board or because there are no chips left in the bags).

There are a few rules for placing a chip.

There is one exception with your own start tile; at any point in the game, you may place your new chip on top of your start tile (making it a stack of 2 chips).  You do not have to count there from any other chip, you simply place a new chip down.  If you have no other legal play, you are, in fact, obligated to play onto your start tile if you have not already done this. 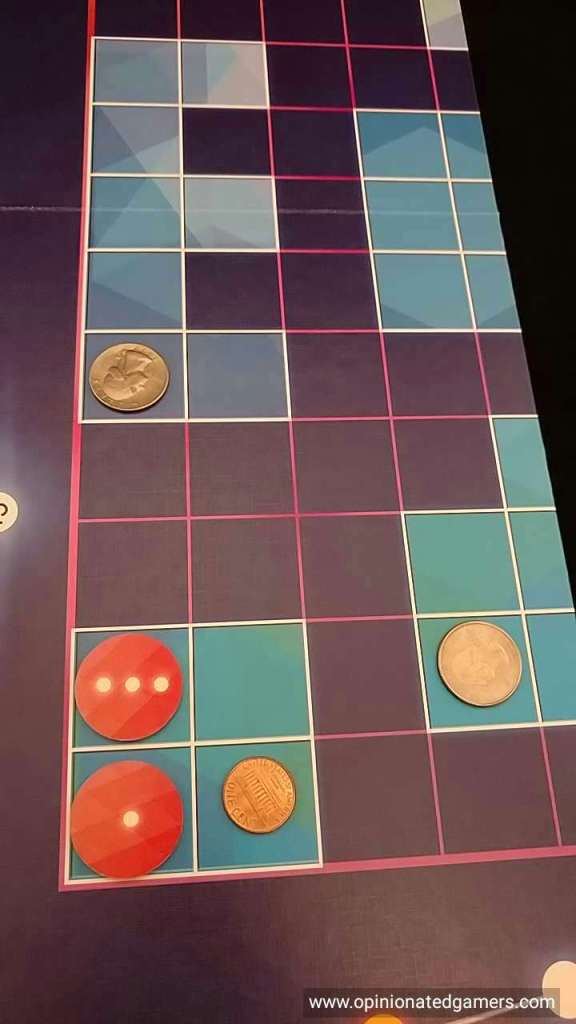 Once you play your tile, you draw a new one and wait for your next turn. The next player clockwise around the table now takes their turn. Again, the game ends when no one can play a chip legally.  The game then moves into the scoring phase.

Glux is a nice abstract game which more strategy to gameplay than you might think from looking at it.   My first inclination was to try to bomb the board with the highest numbered chips I could (as these high value chips give you the best chance to dominate a room), but I quickly learned that this severely limited my movement options in later turns.  As you must have a clear line of sight to your next placement area, it becomes increasing hard to find areas on the board that are 5 or 6 spaces away from a chip with nothing in between.

So, as you play the game, you must balance the need to have high points on the board to score in the rooms with smaller numbers to give you options to place new tiles.  It’s probably a good idea to keep a few options open because otherwise you could find yourself out of the game without much warning.  To that end, I am often looking for placements that are on legal spots for my opponents.

A big part of the game is managing the effect of luck of the draw on the game; as you only hold one tile at a time, your tactics are completely determined by the draw.  There is no way to replace your drawn tile, so you have to figure it out!

The rules are easy to follow and the rules include many helpful illustrations.  My only beef here is the weird scoring rules.  You score 4VP for being first in a room and 2VP for being second.  You never score anything else – so why not just make it 2VP and 1VP?  I’m guessing that something happened in development – maybe it was 5VP and 2VP to start with?  Or maybe you added and divided tied room bonuses?  In any event, it’s just a weird system to use only the even numbers.

The game has a lot of the hallmarks of a gateway game – it can be taught in 2 or 3 minutes with some examples, it is quick to play, with little downtime for the players between turns.  The theme is admittedly dry, and while that doesn’t serve as a negative to my eye, I know there are many that are turned off by this.  Glux is a great filler this Essen season, and time will tell if it still is I the rotation next year.