In Sponsio, players take on the role of lanistae – the men who used to run gladiator stables in old Rome.  In this game, you are placing bets on the outcome of gladiator battles (which are done in a trick taking process).  The player who first reaches 30 coins OR wins 9 bets in a row is the winner of the game.  The game is played in a number of rounds until one of the victory conditions is reached.

Each round has three phases: Betting, Trick Taking, Scoring

In the betting phase, each player gets 8 cards dealt to him.  The undealt cards are placed face up on the board in the Talon.  In this phase, each player will have 4 turns.  On a turn, a player can pass OR play a card face up next to his board and then do one of three action choices:

Note that you are not obligated to place a bet in this phase.  If you do not, you are considered a Troll for this turn – and you will succeed by having other players fail at their bets.  There must be at least on bet in the round, so if no other bets have been placed, the Dealer is forced to make a bet witth the final turn in this phase.

In the trick taking phase, each player has 8 cards to play – the open cards laid on the table (which were used to take actions) as well as whatever is left in his hand.  If the Combat token was taken, the owner of the Combat token leads; otherwise, it is the player to the dealer’s left.  Each player must match the color (suit) of the led card if possible.  The highest card of the led color wins the trick; there is no trump.  The winner of the previous trick leads the next trick.  This phase lasts for 8 tricks, at this point – all the cards will be played.

In the scoring phase, each player evaluates his bets.  If they are successful, you place the payout on the coupon portion of the bet.  If they fail, you flip the bet card over.  There are five types of bets:

If the betting player succeeded at ALL of his bets, he moves his bet counter marker up a number equal to the number of bets made.  If he failed at least once, he resets the counter to zero.

Then, in player order, players can choose to cash in their bet sequence counter (move the counter back to zero and take coins for it).  Finally, you see who is the winner of the round.  The player with the most coins collected in this round gets a 2 coin bonus.  If there is a tie, all tied players get 1 coin. 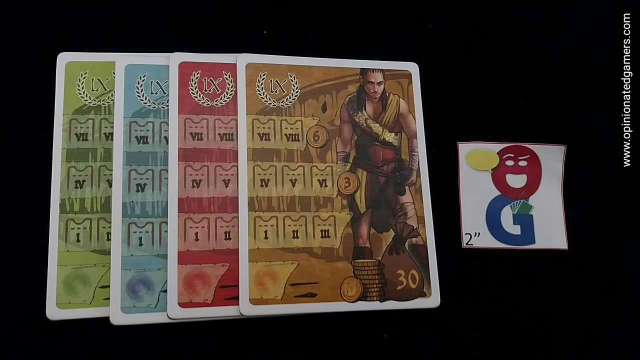 Now, check to see if the game end is triggered – again, a player has 30+ coins OR a player is at the end of the bet sequence track (i.e. he has won 9 consecutive bets) OR the fifth round has been played.  The bet sequence victory condition trumps the 30+ coins.  Ties go to the player with the most coins in hand, and if still tied, the player who earned the most coins in the final round wins.

Taking a bet early on in the round can be a risky proposition – you are committing yourself to a bet without having that much information; you will learn more and more about the cards in play as they are laid face up on the table… but, if you wait too long, you might lose the opportunity to choose a particular bet as someone will have beaten you to the card.

Based on your cards, it may make more sense to be a Troll and just try to stop other people from making their bets.  The payout here is low – AND you have the risk of losing 4 coins if all bets are made – but sometimes the cards just don’t work out for winning tricks.  It is however a fairly low risk proposition, and it’s usually a good way to pick up a bet or two.  The other good thing about this is that you don’t have to commit to this strategy by picking up a particular bet tile; you can just wait and see what other players do, and if you think that it’s a good play, you simply don’t get any yourself.  You should also remember that you could choose to take the colored cards and choose the null option – if you don’t win any tricks at all, you certainly won’t have any cards of the particular color!

The game gives you different opportunities to move towards victory.  You can take a betting card and choose the low risk options in an attempt to get to 9 in a row.  You could also choose to be a troll to get multiple steps on the sequence chart in a single round.  The high risk bets may be hard to achieve (as the high odds would suggest) – but winning a 5x bet is one-sixth of the way to the goal total!

Overall, this is a clever card game, and one that I don’t yet feel that I’ve mastered.  There is definitely some skill in the trick taking portion of the game, but this only pays off if you have the matching bets too.  I’ve always been interested in quirky trick taking games, and this one definitely has grabbed my interest in the early plays.