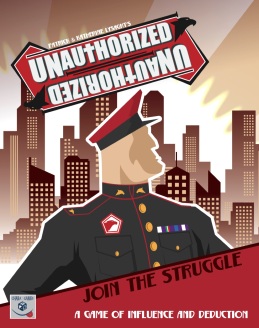 Unauthorized, a social deduction game by Chara Games, will be released on Kickstarter on February 7.  In the game, an underground church struggles for existence in an inhospitable land, while the state attempts to lure believers away from the church or lock them into prison.  The designers released a designer diary on BGG.

My game group loves social deduction games, so I was excited when Chara Games approached me about doing a Kickstarter preview.  Most of today’s social deduction games are twists on the genre’s most popular titles, so I’m always pleasantly surprised when I find a fresh, original game.  Unauthorized is such a game, and I’ve been intrigued by my plays so far.

The Pastors are on the side of the Church, and they win if — after four rounds — a majority of players are loyal to the church and at least one of them is not in prison.  The Pastors start the game with a hand of seven Church (green) experience cards.

The Police are on the side of the State, and they win if, after four rounds, there is not a Church majority or everybody loyal to the Church is in prison.  The Police start the game with a hand of seven State (red) experience cards.

The remaining players are neutral, and their loyalty will shift based on their experience cards, which will either be openly played on the table or held secretly in their hand.  These players get seven experience cards, which may be favorable to the Church (green), the State (red), or Wild (i.e. red or green).  If a player ever holds less than two experience cards, they draw back up to two.  If they have a majority red cards, they are loyal to the State, or if they have a majority green cards, they are loyal to the Church.  Players may not intentionally switch sides, except through choosing how to play wild cards, although it may happen unintentionally during play.

There are four rounds of play, each with three phases.

Phase I: Card Actions – All players do these actions simultaneously.

Phase II: Player Turns – Starting with the dealer, each player takes one of these actions.

As the fourth round ends, players must choose how to play any wild cards in their hand, and then all cards are played simultaneously.  The winner is then determined.  The Church wins if they have a majority loyal to them and at least one player is not in prison.  Otherwise, the State wins.

When I read the rules to Unauthorized, I was immediately intrigued by a couple of novel mechanics implemented by the designers.  First, unlike in most social deduction games, loyalty can shift mid game.  Second, by forcing players into prison, the State can quickly limit the powers of the Church by splitting their group, a mechanic which itself leads to interesting decisions.

Throw in the fact that each player has a special power — all of which are integrated seamlessly into the game design — and you have a game with high replayability where everybody is excited about their role.

The theme is clever, and I thought it worked exceptionally well.  Treating the various cards as “experiences” that can shift loyalty was a nice thematic touch.  The publisher, Chara Games, specializes in Christian-themed board games, and I think this game could be a hit with church groups.  That said, the theme isn’t in-your-face, and I think the game could be enjoyed by just about anybody.

I was worried that the game would occasionally tilt from one side to the other, with games quickly veering towards the State or the Church.  We had that happen in one play, but that’s seemingly because — due to the randomness of the draw deck — far more green cards came out in that play than red cards. I’m chalking it up to an anomaly, and setting that experience aside, the game seems well-balanced.  The balance of cards in the draw deck actually shifts based on the number of players, helping ensure that the game remains balanced.

This is middle-of-the-pack in terms of complexity.  The publisher has recommended the game for ages 12+, but I think you could probably play with players as young as 10.  It is certainly more complex than Werewolf, but I’d say it is on par with a game like the Resistance.  You could teach this in five to ten minutes.

The game does work better in larger groups (8+ people) than smaller groups (6-7 people), although it played fine at all player counts.  Our plays took 20-25 minutes, a bit shy of the 30 minute time on the box, but my group always plays faster than average.

If your group likes social deduction games, Unauthorized is worth checking out.  Chara Games did an exceptional job of innovating in a crowded genre, creating a game that features intriguing strategies, high replayability, and plenty of those laugh-out-loud moments that social deduction games are known to provide.  Toss in the clever theme, and I predict this will do well on Kickstarter.  We’ve certainly enjoyed our plays!