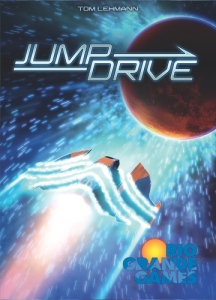 People have questions about Tom Lehmann’s newest game… I, as your humble and ever-helpful game reviewer, have answers. Read on!

Q: Is Jump Drive just Race for the Galaxy Lite?

A: While Jump Drive shares some iconography, card art and structure with Race for the Galaxy, it is not the same game.

The designer has clearly stated that while Jump Drive is billed as “an introduction to the Race for the Galaxy universe”, it isn’t “Race for the masses” and was never intended to be. Tom wrote: “Jump Drive is a ‘filler’ game, intended as a quick diversion while waiting for others to arrive or as a fun, fast ‘closer’ to an evening of other games. I believe it succeeds as this (your mileage, of course, may vary).”

Q: Does it taste great or is Jump Drive just less filling?

A: Jump Drive is fast (the longest game I’ve played went 8 turns)… but is surprisingly meaty for a filler. You have to make real decisions about what you’re going to buy, the wisdom of exploring to find appropriate cards vs. the loss of a turn, and finding the synergy in what you have in your hand.

It’s not as layered as Race for the Galaxy – but Jump Drive is more than just “build the most expensive card you can build.”

Q: What about Roll for the Galaxy?

A: I consider all three of these games (Race for the Galaxy, Roll for the Galaxy & Jump Drive) to be part of a family thematically. Roll is probably the least like the other games in design – but they definitely feel related to each other..

A: I think a better predictor will be how much you enjoyed Tom Lehmann’s The City. Since there are only three icons on the cards (military, explore & chromosome), the common complaint about Race for the Galaxy iconography is pretty much toast. As well, I don’t think Roll for the Galaxy’s dice-spending mechanism has a lot in common with Jump Drive, so I don’t know that disliking it will be a good indicator of your potential to take delight in Jump Drive’s charms.

Q: Is this The City dressed up in sci-fi clothing?

A: No… and I say this as someone who LOVES The City and has played it 85+ times. While the basic structure of the game is similar, they are not identical. In our experience, Jump Drive has slightly smaller tableaus and more synergistic relationships between cards.

A question for discussion in the comments: if these games dressed up for Comic-Con, what characters would they be? (Come on, people, entertain me.)

Q: Does this game really just take 15 minutes to play?

A: Yes. Set up is easy (shuffle the deck, deal out 7 cards, each player discards 2 cards and the game is underway). Since the game never goes more than 7-8 rounds at a couple of minutes each, you’re totaling up final scores in 15 minutes.

It’s going to take you longer to read this review than it is to play the game.

Q: How short can you make the rules?

Q: Is there a single overwhelming path to victory in Jump Drive?

A: Absolutely not. I’ve seen a wide variety of winning card combos:

A: No. I’m sure that others can offer deeper analysis than I… but knowing what your opponent is doing – both the type of cards and the speed with which they are building – is important to playing well. My boys are learning that I like to increase my card income early and then develop/settle in the later turns to speed up the game… which means that their point-heavy engines need to get running quickly or they’ll fall behind.

You can have games where you just don’t draw the right cards… but since the game lasts only 10-15 minutes, I’m perfectly willing to live with that in exchange for a great game experience. (I’m also a fan of Harry’s Grand Slam Baseball and the aforementioned The City, both of which have the same “problem”. Of course, your mileage may vary.)

Q: You probably got a free copy of this game, right?

A: Nope. I went out and actually paid full MSRP at my FLGS for Jump Drive… because I didn’t want to wait any longer for it to arrive. I played the game for the first time at Gulf Games… and it was an immediate “must get” for me.

Q (Bonus Question – yes, if there were numbers on here, this review would be going all the way to 11) One of the Opinionated Gamers asked me if scoring was like The City… and if so, was it easier to calculate?

A: Yes, and yes. I had the privilege of learning The City from Tom Lehmann (back when I was running the Stained Glass Games weekend in central California) and the scoring method that is codified in the rules of Jump Drive is the method he taught us for scoring The City. It involves placing the victory point chips beneath each card… then simply adding the change in score rather than recounting each time. (There are plenty of victory point chips in the box, so this works really well. There is also a nice example on the back of the player aid cards.)

follower of Jesus, husband, father, pastor, boardgamer, writer, Legomaniac, Disneyphile, voted most likely to have the same Christmas wish list at age 44 as he did at age 14
View all posts by Mark "Fluff Daddy" Jackson →
This entry was posted in Reviews and tagged Rio Grande Games. Bookmark the permalink.

3 Responses to 10 Questions + 1 About Jump Drive