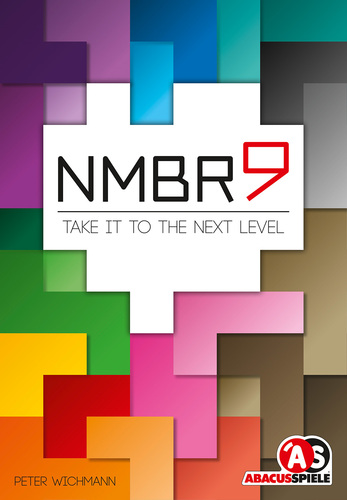 NMBR9 is the newest entry in one of my favorite genres – the simultaneous puzzle with identical pieces genre – which really needs a better name, maybe simultaneous solitaire?  The first game of this type that I came across was Take it Easy – but many others fall into the category including Cities, Kreuz & Quer, Traexx, Finito and others.  There is also a offshoot of this genre which use dice: Wuerfel Bingo, Mosaix, etc.

In all of these, players have an identical (or very similar) set of components, and then some common method of action choice happens (die roll or card draw) – and then each player is left to their own devices to use this same action choice to score the best that they can.

NMBR9 uses a deck of 20 cards, 2 each numbered from 0 to 9, to provide this action selection.  Each of the numbers is represented by a cardboard punchout.  As the cards are drawn, each player takes the identical number piece and then places it into their play area as best as they can. The goal in NMBR9 is to have the highest score – and scoring is figured out by multiplying the number on the tile by the number of the vertical level that the tile is found on.

The game is played over 20 rounds – in each round, a card is drawn from the number deck.  Each player takes that tile and places it into their play area.  There are a few restrictions on the placement.  First, while the piece can be rotated in any direction, its orientation must remain the same – that is, the colored number side must always be visible.  The tile may not be flipped over onto its black back side. Second, if the tile is to be placed on level with other tiles. It must be orthogonally adjacent to at least one other tile on that level.  If a tile is to be placed on any level other than directly on the table, every square in the placed tile must lie on top of a previously placed tile; there can be no protruding areas.  Finally, if a tile is placed on an upper level, it must lie on at least two different number tiles from the level below.

You can experiment with tiles all you want, but once you have placed it into your area, it cannot be moved – so be sure it’s in the location that you want it!  All players place their tiles at the same time; they should really try not to look at what other players are doing until they have placed their own tile.

The game ends when all the cards have been drawn and players have placed their twentieth number tile.  At this point, each player calculates his score.  The first thing he should do is count the total number of levels in his pile.  Then, starting from the top-most level, the player should remove tiles.  The score for each tile is equal to the number of the tile multiplied by the number of the level.  (For numbering purposes, the level which lies directly on the table is Level 0; the second level is Level 1, the one above that is Level 2…)

The player with the most points is the winner. There is no tie-breaker.

As I mentioned at the start, I generally love this category of games.  They are usually simple to teach, and if you have enough bits, they can accommodate any number of players.  Many of my similar games have multiple sets put together to allow for many people to play – I think my Take it Easy box can support 20; Cities can handle 8; Finito has 12; Wuerfel Bingo has 10 scoring sheets in it; etc. This would be no different – as long as you have enough number tiles for each player, you can keep adding them into your game.

The rules are simple enough to explain, and usually two or three physical examples using number tiles is enough to show people how to play.   At first glance, it seems like people would stick to similar placements – but, in practice, this has not been the case.  The multiplicative scoring rules leads people to place tiles in all sorts of different ways.  I usually try to stick to a strategy where I build a nice solid base (Level 0) with no gaps as this will allow me to then play many tiles upwards in a pyramid like style.  However, if a high number (say 7, 8 or 9) comes up, I might be tempted to break from my pattern and play it upwards earlier in order to start scoring points.  Additionally, as each tile can be freely rotated (as long as it stays face up), the topology of each player’s setup rapidly diverges from other players.

The usual complaint that I hear about these sorts of games is that there is no interaction.  And that’s entirely true. But, that sort of thing doesn’t bother me.  This is simply a solitaire puzzle that you play at the same time as other people.  If you don’t like that kind of activity, you won’t like this at all.  But, for me, the challenge is to not only do better than my opponents, but also to try to beat my top score.  Unlike some of the genre (say, Take it Easy) – there is no easily defined maximum score.  I suppose that someone with a computer could figure it out, but I’m not going to be that person.  As it stands now, my goal each game is to beat everyone else and try to top my current best score of 91.

Craig V (3 plays): NMBR9 is a really great simultaneous-play puzzle game. It’s pretty much set up and ready play as soon as the box top is removed, the graphic design is attractive, and any number of players can participate just by using copies of the game. The rules are simple, easy and quick to explain, and the game plays quickly. There is no player interaction, but that’s not really the point of games like this. Overall, NMBR9 is a tricky puzzle that’s quite fun and has just enough variability each play due to the random order that the numbers get used to keep it interesting. Love: 1, 8, 9; Like: 2, 4, 6, 7; Hate: 0, 3, 5. My personal best is currently 95.

Chris Wray (14 Plays):  I fully agree with the comments above.  This is a cool twist on games in the polyomino genre, and it is simple enough it could be played by just about anybody.  I’ll add that gameplay is highly addictive: I spent considerable time playing this with my family over Easter weekend, and I’ve already racked up 14 plays.  I could see this getting some form of recognition from the SdJ jury.

Joe Huber (4 plays): While most of my time at the Gathering of Friends was spent on prototypes and known favorites, I did try this out – and rack up four plays of the game, more than for any other published new-to-me game.  And pick up a copy from the prize table.  I’m a fan of true multiplayer solitaire games, and this is a clever one.  Could be one I grow to love, but for now it’s a game I like and look forward to exploring more.

Dan Blum (several plays): I have a lot of games in this general category already, but this is different enough from the others that I plan to get a copy. My only (very mild) annoyance is that the box and insert are twice as high as they need to be; granted a lot of people will get two copies and combine them, but without the insert there would be room for that in a half-height box.