My main sentiment is still wow with a long ellipsis. Sorry to be so repetitive and for the paucity of detailed emotions.

Yesterday was crowded, but today less so. From pictures of past years, it always seemed that demos were plausible, even though I know text reports have always told me otherwise. What I found is that in practice, no table ever seems to be “about to finish” when you’re interested in a demo. So I wander off, and, well, that happens again somewhere else. Next thing you know it’s time for tube bread.

In contrast to Origins/Gen Con, the demo situation is compounded by the language barrier, as if the players are speaking English, sometimes you can pick up enough basics by listening and watching; that approach is less successful in this context.

The calculus for me was to buy the things I or my group were fairly certain we’d enjoy, and that didn’t have imminent domestic release, and try the things I was less confident in. What that results in is a convention experience of trying games you aren’t that excited about. (What an excellent way to enjoy yourself!). There was no need to try the things I’d bought, as I’ll do that at home with my group.

But at some point I wanted to play something, so I sat down to Majesty. 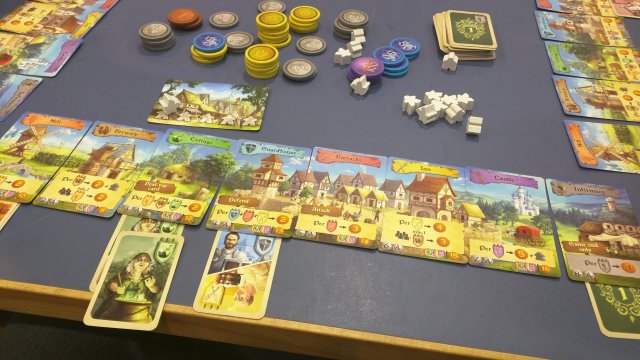 We had what seemed like an odd shuffle the first few turns, and I think we were all a little nervous, but it definitely gelled shortly after that. Sort of like Machi Koro if you were buying dice results off of a conveyor. Glad I picked it up.

Back to yesterday’s theme of surprises. While I know Spiel has an industry side to it with press events and designer/publisher meetings, I hadn’t foreseen that manufacturing was part of that. There were quite a few manufacturer booths, and I enjoyed at one point demoing a game next to a cardboard box manufacturer pitching his different sample boards.

It’s a solo game from the designer of Shephy. There are gorilla cards, and there are banana cards. It has several levels of play, and I didn’t graduate from the first. 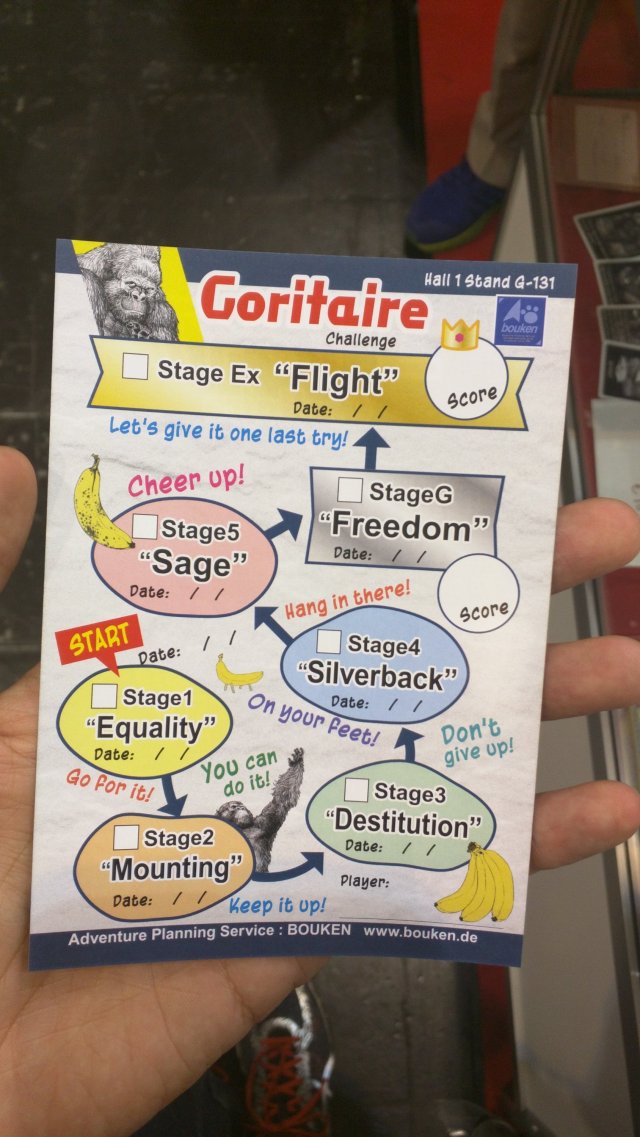 Each level adds more rules. I enjoyed it enough to buy it, despite solo games not being my thing. I’m looking forward to trying it again and seeing what rules are unlocked at the next level.

Um, also it has a mechanic called “hypothetical bananas”. Check it out. 1G131.

So, there was a point today when I just stopped. I leave Essen in the morning, and my momentum was winding down. Luggage was full, demoing seemed irrelevant, (and surely NOW I’ve seen everything?)

So I left. On the way out I ran into a friend who asked about Goritaire. I didn’t remember the booth number. I headed on my way back to my Air BNB, grabbed my punchboards and whatnot in an attempt to find a recycling bin and wrap things up.

I took the boards back to the Messe, and thought, surely it won’t be hard to find that booth again – I was just there. Well, I couldn’t. It wasn’t where I thought, and I couldn’t triangulate it by publisher or release name with any list I could find. I did eventually find it, but this is just my really round about way of telling you that OMG I found even more booths I hadn’t seen before on my quest for the gorilla booth!

Then I knew I definitely had to leave.

OK, that’s about it. (Looking though my pictures for other parting thoughts.)

Here is some street art on the walk to where I stayed. I would play a game with this style: 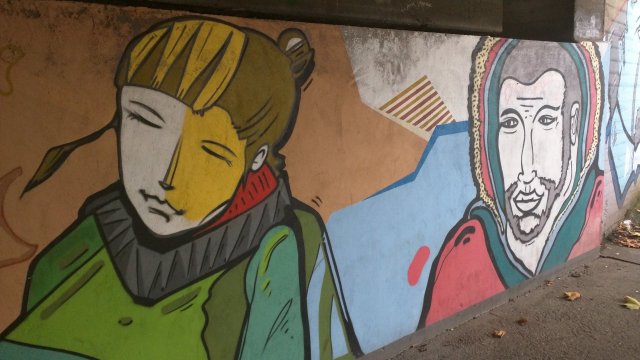 OK, that looks like all. Now it’s just fingers crossed for the checked bag making it back safe & sound.

This entry was posted in Convention Report, Essen 2017. Bookmark the permalink.