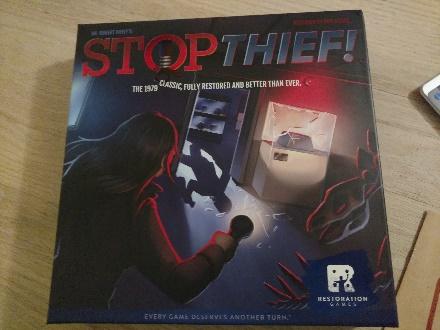 I played a lot of board games as a kid. My dad was always up for a Saturday morning game session and as I got older I would play board games with my friends. When Stop Thief! came out I was drawn in by its electronic device and its mystery theme and pleaded for a copy, which I finally got for my birthday. It lived up to my expectations, and got played a lot for a couple of years, until I entered full teenagerhood and was too cool to play what  I perceived as a kid’s game anymore. My copy was sacrificed to a yard sale, never to be played again by me.

Fast forward to several months ago, when a friend forwarded me the Kickstarter announcement; my nostalgic inner child immediately jumped on board. I am happy to report that Restoration Games has done a great job with this recreation of the game.

Each player is a private investigator whose goals is to catch a thief that is moving around the board. The thief’s movement is hidden from the investigators; players must use audio clues given to them via an app to try to track the thief’s location.

There is a Restoration Games app that must be downloaded to a smartphone or tablet in order to play the game; the app provided the audio clues and some general guidance.

Each investigator has a pawn, movement cards and $3000. The deck of thief cards is shuffled and the first card is turned face up; this is the first villain the investigators will try to catch. The app tells you where the general location on the board where the first crime is being committed.

On your turn you first press “Get a Clue” in the app. The app will play the clue for all players, and can be replayed as needed. The thief makes his/her move based on some simple rules.  Spaces on the board are numbered and the thief always moves forward to the next numbered space or stays on the same space, and from the sound you know what type of movement the thief is making; there are different sounds for moving forward, going through doors, going through windows, being outside or on the subway.

Once you have the clue the active investigator plays a card from their hand and moves up to the number of spaces on the card. Investigators must move along the footprint path on the board, cannot go through a window or end their space on the same space as another investigator. Some cards will also have a special power that will let you break the movement rules or perform a special action (like getting a private tip) and some thief cards may have an effect that limits or changes your movement abilities.  Cards played remain on the table until you play your card that allows you to pick them back up.

In order to catch the thief you must end your turn on the same space as the thief. If you think you have done so you announce that you will attempt an arrest. You tell the other players the number of the space you think the thief is on and then enter it in the app. If you are wrong you play $1000 to the bank and play continues; if you are right you collect the reward money from the thief card. 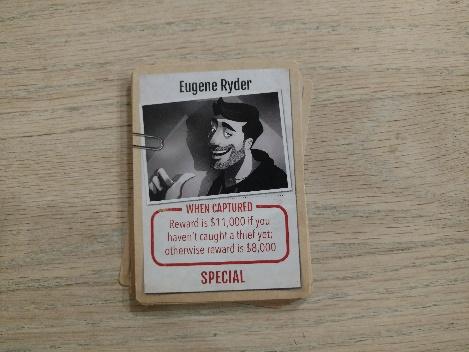 The game continues with a new thief until a player has reached the amount of cash needed to win the game (from $25,000 to $45,000, depending on the number of players).

I liked this game as a kid and I like it now.  I enjoy deduction games, and while this one is much more of a family deduction game than a “gamer’s game” it is still enjoyable. You aren’t relying on other players to track important information, which for me is a plus. Puzzling out where the thief is still requires some brainpower, but it is very forgiving if someone gets confused; they can use other player’s turns to glean information about where the thief is now. I’ve played it once with family (my niece and nephew, both teenagers) and once with gamers; both plays were enjoyable for me and both groups enjoyed it. The box lists the age as 14 and up, but the Restoration Games website says 8 and up, and I think that is more accurate.

The game looks better; the components and art a more modern and definitely an upgrade. The board is visually more appealing, and the box art and box size are a big improvement. The app is a big improvement over the electronic box – the sound is clearer, the clues can easily be replayed and it helps keep track of where you are in the game. I do miss the clunky electronic walkie talkie-like device from the original game, but purely for nostalgic reasons – the app is much more functional, and it does give you the option of using the retro sounds from the original game if you prefer.

Another benefit to the app is that Restoration Games can easily put out additional modes; currently the app has options for solo, 1 vs. all and cooperative play, all of which are due out in the near future.

The game would benefit from a reference card that reminds players of the thief’s movement, but this is easily rectified by printing/photocopying that page of the rules.

Thoughts from the Other Opinionated Gamers

Erik Arneson: This is an outstanding new version of a game I remember fondly from childhood. Everything about Stop Thief! — especially the new rules, the modern graphic design, and the integration and functionality of the app (the new modes Tery mentions above are currently expected to be available by the end of 2017, according to a Kickstarter update from publisher Restoration Games) — is top-notch. Highly recommended.