If you haven’t already heard of the Gaming Crate, it’s a fairly new product that is specially curated by the folks at Hasbro on a quarterly basis.  It is set up on a subscription basis.  In general, there are two different types of crates: the Family Crate or the Party Crate.  As the name would suggest, the Family crate has games designed to be played by families or with kids of all ages.  The Party crate has more mature offerings that would be better suited for adults or college students.

This is the second set of crates to be released – and this time around, I chose to look at the Party crate.  The crate itself is a 12x10x6 inch box filled almost to the top with games.  In this particular version, there are three main games as well as two nice bonus offerings.    As you would expect from Hasbro, the games here are mostly mainstream, but not all of them!  One of the games in the first set of crates was a Mask of the Pharoah – a re-release of Mask of Anubis, once a hot title at Essen 2016 from the Japon Brand stand.

In this Apples-to-Apples like game, players choose a card from their hand to the moderator, hoping to give him/her a card with a problem that “pisses off the person most”.  There are 250 different cards in the game, each with a 21st Century problem on it.   There are also scoring tokens that range from 1 to 5 stars.

One player is nominated to be the first moderator, and the rules call that player Bob.  Everyone but Bob gets a hand of four cards.   Then, each non-Bob player looks at their hand and passes a card facedown to Bob – again trying to give him the worst possible problem for Bob.  Unless you are playing with 6p, all players give Bob 2 cards.  When Bob has all the cards, they are shuffled up and then bob flips them over and puts them in order from most tolerable to the worst problem.  They are they read aloud in this order; the worst problem gets the 5-star token, and going downward towards the most tolerable problem. Once the one star token is given away, all other cards get squat.

Then, all players pass their remaining cards to the player on the left, and the player with no cards is the new Bob.  The same routine is continued until each player has had a chance to be Bob once.  The player with the most points wins. 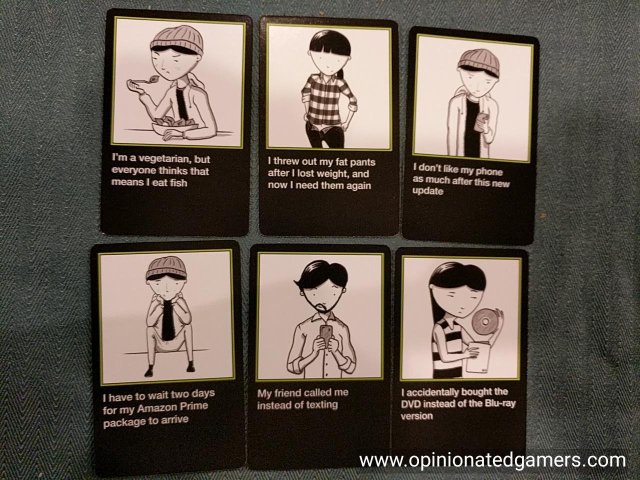 My thoughts – it’s a nice take on the read my mind party game genre.  The “problems” on the card are pretty funny, and they are a nice mix of current mems, “first world issues” and whatnot.  The art is nice clean black and white line art.   Like most party games, this is not one that I’m really worried about winning or losing – it’s more about playing funny cards, laughing with friends or telling funny stories once the problems are revealed… Trust me, there’s going to be someone in every group that has an issue with just about every problem in the deck.   If you’re being serious about gameplay, you may want to scrap the passing rule or somehow modify it; when you pass the cards, the new Bob will remember which cards he just had, and thus, he’ll have a good guess as to the owner of a card from that hand or maybe even the one before it.  Either re-deal cards with each hand or figure out some way to not pass on the current Bob’s cards. (My guess is that the people who really love this sort of game are not going to be the people that are too worried about the “fairness” of the thing…)

Hold That Face is a different sort of party game; in this one, the players will split up into two teams.   There are four different decks of cards in the game: Happy, Sad, Scared, Mad.  One team will be the active team.  One player on this team is designated as the face maker.  The other players on that team will be the guessers.  The other team then choses one of the four decks and takes the top 4 cards off the top.  They look at those cards and then hand one face down to the face maker.  That player must read the card and memorize it, and then gives it back to the other team.  The cards are shuffled and then placed face up on the table so that the guessers can read all 4 cards.  While the guessers are reading the cards, the face maker can take the included mirror and practice his face making skills.

Once the cards are all read, the face maker must then make a face – the facial expression made should hopefully direct his teammates to choose the correct card out of the four.  The face maker cannot move nor make any sounds.  Also, he should not change his expression during the guessing.  If the guessers are correct, they keep the card as a point.  Then, the teams change roles, and the other team gets to make faces and guess.  Continue this until all players have had a chance to be the face maker once.

My thoughts – when I first opened this up and read the description, I thought the game would fail on all levels… I couldn’t see how anyone could make such a face to distinguish between four cards of the same basic emotion.  So, then we tried it out.  And, I’ll be dipped – we were successful over half of the time!  Looking through the cards, there is enough variety in the conditions to allow you to make different expressions for them.  I’m not much of a role player, and this one maybe borders a bit on that, but I only had to make a face once in the game, so it wasn’t that bad (and they guessed it right!)

Coinhole was a game that I first saw at Essen, and I did briefly write about it because I was a bit sad to not be able to bring it home… By the time that I saw it, my bags were too full from the weight standpoint.  So, I was pretty happy to see this one nestled at the bottom of this party crate.  Coinhole is a tabletop version of Cornhole, a game that originated in my hometown of Cincinnati.  Instead of tossing beanbags filled with corn kernels into the slanted target, in this game you bounce coins off the table onto the slanted target.

Scoring here is a bit different from the base game – here, you score points when land a coin onto the target: 6 points for getting it in the hole (touchdown), 3 points for landing in the colored end zone at the far end of the target (field gold), and 1 point for just getting it on the board (I suppose we could call this a ‘rouge’ for our Canadian football fans).  Each team gets 2 coins per round, and the points cancel out – that is, only one team scores per round and they will score the difference between the two teams’ value for that round.  The game is won by the first team to get 11 points.

My thoughts on the game: it’s actually a lot harder than you’d think to get the coin to bounce where you want it to go, though with practice it becomes somewhat predictable.  I’ll admit that the first time that we played Coinhole, our group was pretty awful at it.  We seriously could not get it in the hole, or even onto the target.  With some practice, I can now get it onto the board at least half the time, though I’m still not too good at scoring touchdowns.  It’s a decent little filler, and something to pull out when waiting for others to finish playing something else.

There are two other things in my crate, though I don’t want to spoil the surprise.  I will say that one of the things a fun little gaming accessory that you could use in a game you probably already own.  The other thing is a nice introductory 2-player version of a game (that I’m sure Hasbro would love you to become addicted to…)

So on the whole, the gaming crate can provide a nice evening of entertainment for a group.  The two party games are different enough that you can play them on the same night, and I suspect they would have decent replay value for those groups that enjoyed them.  You also get two 2-player games in the crate for those times when you only have one friend around.   All of the games in this particular crate are of the mass-market type, but I think that is really what is expected of this sort of project.

The current cycle is almost over – I think the deadline to order this current set is around 12/1/17.   This might be a nice thing to give someone for Christmas – you can order the current crate now and wrap it up and then let them know that they’ll be getting another one in 3 months time…  and, they get the added excitement of not knowing what they’re going to get until they get it!  If you want this set, you have to act now… the precedent from the first set is that the games in the crate are no longer available once the subscription window closes!